This Is Getting Old: Zen Thoughts on Aging with Humor and Dignity 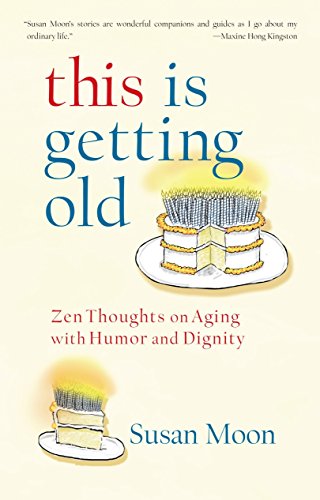 Susan Moon’s use of the old cliché “This is getting old” is not meant as a complaint, but rather as a shared exploration of that state in which we are all passing through. The emphasis is on the “This . . .” and it reads like a memoir of living after age 50. Moon is the author of the hilarious Zen classic, The Life and Letters of Tofu Roshi and the former editor of Turning Wheel: The Journal of Socially Engaged Buddhism, so her tone is both lively yet sincere. In this book the sharing is most personal and delivered with compassion, a healthy ambivalence, and wit. In her mid-sixties, Moon is like a Buddhist Anne Lamott—confronting her life bravely and unapologetically, with generosity and a twinkle in her eyes.

Here she confronts those moments of utter forgetfulness that increase with age. After calling a friend only to stare at the squirrels out the window and to forget why she has called, she comes to think of these “senior moments” of blankness as a possible blessing and confides:

“For example, standing in the kitchen wondering why I have a pair of scissors in my hand, I notice the sunlight glinting off its metal blades and dancing on the wall, and I repeat Nhat Hanh’s sentence to myself: “The real miracle is to be awake in the present moment!” Younger people can also experience such transcendent moments of deep immersion in the infinite present, but they have to go to much greater lengths to do so, meditating for days at a time, for example, or hang gliding. I have only to carry a pair of scissors from one room to another.”

She calls such moments “these little coffee breaks of the brain,” and shouts to herself, “Senior moment, wonderful moment!”

Though she will occasionally quote from Buddhist sources, mostly from Japan’s Master Dogen, this book is enlarged by its Buddhist perspective, not confined by it. It’s a practical Buddhism she shares easily about living, loving, aging, and yes, dying. “Letting go rhymes with getting old” she tells us and shares the loss of parents, our body’s aging through arthritis, getting shorter, graying hair, fear of falling, our sense of invisibility in the world, outgrowing our living space, loss of parents and friends—all the while moving through the book’s three divisions: “Cracks in the Mind and Body,” “Changing Relationships,” and “In the Realm of the Spirit.”

Though she often deals with “women’s issues,” this reviewer found that, too, enlightening and, reading as a man in his mid-sixties, welcomed her honest ambivalence about aging, knowing it often hurts but is our ultimate teacher. Her style is typically conversational yet often beautifully vivid and clear as in this passage on mountain climbing with her grown sons: “Before we started down, I looked hard at the wide bowl the mountains made, taking a picture of it with my mind, the kind of picture you can’t take with a camera, one that has the smell of the wind in it and the relief your shoulders feel when you give them a break from the weight of the pack. I knew I might never see such a view again.”

There is some repetition of theme and subject here, as many of these pieces were published separately, yet the path lies before us, and she remains open to herself and the vastness of this thing we call life. She quotes Dogen: “A fish swims in the ocean, and no matter how far it swims, there is no end to the water. A bird flies in the sky, and no matter how far it flies, there is no end to the air,” and concludes, “My life is vast. I can’t find the edge of it, just like a fish in the ocean or a bird in the sky. There’s no getting out of this life, this ocean, this sky, except by dying.” This is a needed book and one that will be appreciated by a wide audience.