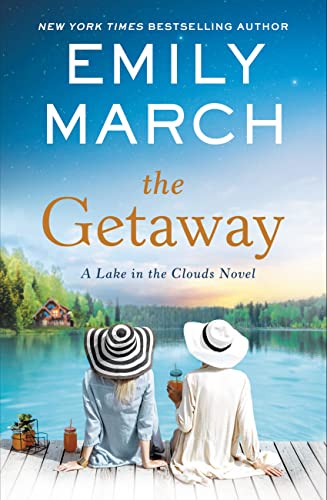 “an intellectually engaging and psychologically probing novel about a family returning from a dark place to a better one.”

Women’s fiction meets contemporary romance in this start of a new series. It might better be called The Breakaway or The Runaway rather than The Getaway, because it’s all about a family breaking the bonds that tie them together, then reinventing them into a stronger, healthier whole, after dispersing from their home base.

In some ways the story reflects a current phenomenon in the United States dubbed The Great Resignation. The lead characters in this book reevaluate their positions in life vis-à-vis their choices and their needs for fulfillment and find their roles painfully off-kilter. So when the pressure mounts to an excruciating boil, they walk away and start anew to figure out who they really are. This includes finding new life partners, which is where the romance comes in.

The lead characters are the mother, Genevieve, widowed early, who devoted her life to raising her four children until family was all she had, and all that mattered; her eldest son, Jake, who devoted his life to building a career, and being in charge, and solving problems, subconsciously striving to be his missing father; and Tess, initially Jake’s employee, who devoted her life to believing she’d never have a family and the deck would always be stacked against her despite her talents and abilities and loving heart.

After Genevieve’s husband died, a family estate matter got so badly messed up that it estranged the four children to the point of hostility. Their conflict breaks Genevieve’s heart and alienates her from all of them, so that when they bail out on the most important holiday of the year for her—the queen of holiday celebrations—she decides to cut her losses and finally let her children be independent adults, for better or worse.

In conjunction with her sister, Genevieve embarks on her own voyage of self-discovery, exploring avenues that weren’t available while she was obsessed with maintaining family rituals and relationships that no longer work.

Her formal cutting off from her children provokes Jake, the eldest, to evaluate his own place and purpose. Which leads him, backward and sideways, to Tess. The narrative cycles between the trio’s viewpoints.

While their issues are unfolding, the rest of the family suffers death and/or abuse and/or self-destructive anger, throwing lawsuits at each other and working behind each other’s backs and generally making things worse instead of better.

The scenarios would be trite if not for the author’s compassionate and lucid presentation. Everyone’s motivations are understandable, and their emotional states easy to relate to. The author also keeps the story elements on point, drawing them continuously toward the climax location of “the getaway” without extraneous side trips.

That “getaway” is a waterfront lodge with vacation cabins in Lake in the Clouds, Colorado, which Genevieve and her sister are renovating as their retirement project. The sister, Helen, serves as a foil for Genevieve’s transformation, in the processing putting her finger on the core story problem.

When Genevieve asks, “Where did all this coldness and anger and hate come from?”

Helen explains: “Love, that’s where. These wounds in your family are deep because the battle was waged between people who deeply love one another.”

Interesting way of looking at it. Another is proffered by Jake in a conversation with Tess, where he asks her:

“Are you familiar with the term When the lakes turn over?”

“I don’t know if it’s a real thing or not, to be honest. It’s something my granddad used to say. Our lake had some of the cleanest, clearest water in Texas. Every few years late in the summer, the water would cloud up and get smelly and taste nasty. Gramps said the lake was turning over. What was on the bottom was moving to the top, and what was on the sides was shifting to the center. It was remaking itself. I think that is what is happening with my family. We’re turning over and in the smelly nasty stage.”

Yup, that captures the story in a paragraph.

The most dramatic scene comes early when Genevieve announces her breakaway. This follows a slow opening, though it’s necessary to build the backstory enough to appreciate what follows. Readers who stick it out through the first six chapters will be rewarded with an intellectually engaging and psychologically probing novel about a family returning from a dark place to a better one.

Their journey demonstrates how such a transformation can be accomplished in reality, which adds an inspirational bonus to a stimulating read.