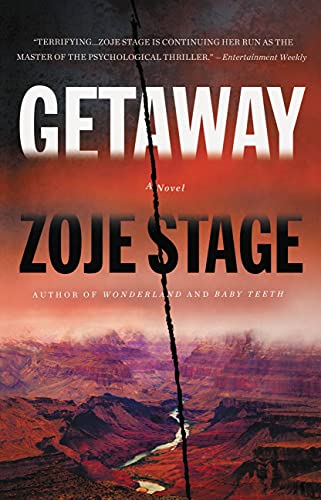 “The descriptions of the beauty and mystery of the Grand Canyon are spot on.”

Getaway is one of those old-girlfriends-get-together-and-it-doesn't-end-well books everyone's reading today.

Imogen Blum and her sister Beck are about to embark on a week-long backpacking trip in the depths of the Grand Canyon. Beck's the outdoorsy one, and it was her idea. She thinks it will be a healing experience for Imogen who has recently survived a mass shooting. She hopes it will help her move on from the trauma. Imogen is an author, but the writing isn't going so well. She's battling writer's block.

Beck has invited Tilda Jimenez, an old friend from high school, to join them. Previously, Tilda had 15 minutes of fame when she finished the 11th season of American Idol. But she's an author, too, and a successful one.

". . . Tilda's six-figure book deal was another thing they hadn't gotten around to discussing. There were periods of the year when they grew closer, but it never lasted. Someone would say something that ruffled the other's feathers, and they'd stop communicating again."

While suppressing some low-level author envy, Imogen doubts Tilda's commitment to the planned excursion and her physical stamina for the hazardous hike. She wonders if her sister has really done enough to help Tilda prepare for such a grueling trip in the rough country. Sleeping bags on the ground, no showers, no bathrooms, only the food they can carry. Lots of trail mix. Few if any hot meals.

". . . When Beck revealed that she'd planned the trip for the three of them, Imogen was certain Tilda would bow out, perhaps at the last minute. Tilda's idea of a vacation was a five-star hotel with its own private crescent of beach. Could Tilda even survive being dirty and sweaty without the refreshing promise of the false-blue water of her Los Angeles swimming pool?"

It also crosses Imogen's mind to wonder why Beck would take a novice like Tilda on one of the most treacherous trails in the entire canyon—". . . rock face on one side, an abyss on the other . . ."

The book opens in Beck's Flagstaff, Arizona, apartment, the three girls packing for the trip. Micromanager that she is, Beck takes charge, raising some hackles, and it’s here the mutual whining and resentment begins.

They leave the next morning, and for the sisters the first hours of the hike are tainted by frightening memories of a previous experience on that same trail with their parents. It isn't long before years of bitterness and old unresolved tensions between the three of them bubble up, including whether a rape actually occurred 20 years ago.

Along the way, they come across a bloody T-shirt on the trail, someone steals their food, and though they're curious about it, because they thought they were alone in the area, they don't seem overly concerned.

All in all, it's pretty slow going with numerous detours of unrelated narrative . . . "those three episodes of Alone . . ." until almost a hundred pages in when the plot ramps up with the discovery of a wounded man in a remote area of the Canyon.

". . . He was tall and scraggly, in dirty, ill-fitting clothes. His buzzed haircut showed blotchy bits of scalp, scars where his strawberry-blond hair wouldn't grow. In contrast, the hair on his chin and face, though short, grew thick and coppery. He looked weary and unhappy, something about him reeked of trouble."

Beck is a doctor, so she treats his wounds as best she can with the limited supplies she has available, and suggests he needs further medical treatment, which he refuses. Instead, he attaches himself to their trek. The girls manage to cut him loose, but he shows up later and after that things get bad.

It's a long book, 360 pages, and—reader warning—be prepared for a good deal of profanity-laced dialogue. Also, the author has managed to pepper the story with nearly every current day progressive principle including immigration, global warming, #MeToo issues, women's rights, same sex marriage, gun control, interracial relationships, and others—none of which is part of the backpacking in the Grand Canyon plotline. So if non-political readers or those who have had enough of it already can get past that to the real story, it's an enjoyable read.

The descriptions of the beauty and mystery of the Grand Canyon are spot on. Readers will almost feel like they've tagged along with the girls.

The author's knowledge of what is needed on such a risk-filled sojourn is extensive, and readers who are into wilderness hiking will enjoy the numerous references to the brand name equipment required for safety and survival on such a getaway.