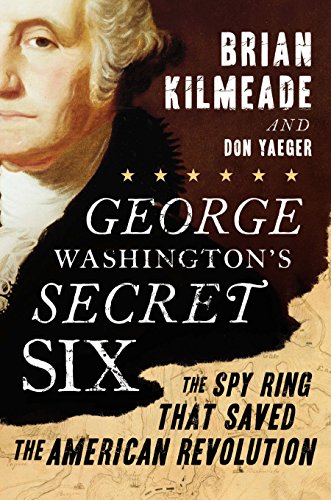 “. . . George Washington’s Secret Six is worthwhile reading. George Washington is well known as a ‘spy master,’ but the ring he helped create and its profound effect upon the outcome of the Revolutionary War are often not given their due.”

No man is an island. Likewise, George Washington’s Secret Six: The Spy Ring That Saved the American Revolution attests to the fact that Washington didn’t win the Revolutionary War alone.

Prior to turning a single page, if you possess a deeper understanding of early American history then the experience of the book is far more dramatic. For those without such knowledge there is plenty of digestible setup to produce the proper backdrop for the narrative.

In some instances a compromise occurs in conveying historical facts, the risk being a tempered (or worse, veiled or diminished) accounting of events and situations. As readers we become removed, if not focused, historical archeologists and sometimes breaking that kind of data into baby-food morsels when what’s really called for is a hearty sandwich can leave us not much better off than where we began.

In the case of Washington’s Secret Six some crucial events are reduced to digestible chunks, while on the other hand there is light shed upon other events further into the war that rarely get traction in other works. It’s unquestionably a story that needs to be told, but Brian Kilmeade and Don Yaeger are not David McCullough, Thomas Fleming, or Harlow Giles Unger.

Information concerning the Culper Ring and its influence on Washington’s decisions is fascinating, especially in the cat-and-mouse machinations between Washington and British commander General Howe. Doubly intriguing is the recounting of extremely close calls and unimaginable stress these spies experienced.

The events surrounding Benedict Arnold’s treasonous act of attempting to hand over West Point to the British unfold like the best spy novel, yet earlier events, such as the continental army’s daring night escape off Rhode Island and the attack on Trenton are all but glossed over.

What George Washington had ahead of him never would have come to pass had he not focused on the game of gathering intelligence. Kilmeade and Yaeger are careful to not let Washington’s post-war persona overshadow the subject matter. Even so, the dramatic appeal of fiction intrudes upon the historical.

The short author’s note which precedes the content states: “Much of the dialogue contained in this book is fictional, but it is based on conversations that did take place and, wherever possible, incorporates actual phrases used by the speaker.” Essentially, if the actual word-for-word conversation wasn’t related in a document then liberties were taken for the sake of drama and narrative progress.

To contrive conversations regarding action or intention within a fictional context smacks of a drama unworthy of the true history surrounding it. More pointedly, some of the dialogue feels removed from the 18th century, another dismaying concern for authenticity hounds.

Reservations aside, for American history buffs George Washington’s Secret Six is worthwhile reading. George Washington is well known as a “spy master,” but the ring he helped create and its profound effect upon the outcome of the Revolutionary War are often not given their due. Their contributions to the American cause deserve every consideration we can bestow.