George Washington's Final Battle: The Epic Struggle to Build a Capital City and a Nation 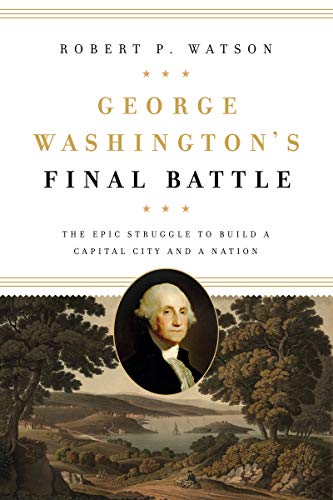 “This is the story of George Washington’s founding of the city that would bear his name and that grew to be the most important capital city in the world.”

George Washington has rightly been called the “indispensable man” of the American founding. He defeated the British Empire to gain American independence and skillfully led the new country as its first president. He also, as Robert Watson details in his new book George Washington’s Final Battle, shrewdly navigated domestic politics to select the site for the permanent capital of the United States along the banks of the Potomac River in Virginia and Maryland.

This is the story of George Washington’s founding of the city that would bear his name and that grew to be the most important capital city in the world. And while Watson at times overreaches with some of his judgments—for example, calling Washington’s struggle over the selection of the capital “perhaps his most challenging” battle—he tells a fascinating tale of political intrigue and struggle that further enhances Washington’s status as the greatest American.

Watson makes clear that Washington did not just oversee the selection and construction of the capital. He selected the site, helped raise money to purchase the land, hired the architects, and provided the vision for a grand capital that would help unite the nation and impress the world’s other powers.

Washington had been a land surveyor in his youth, and acquired sizeable property in Virginia through inheritance, purchase, and marriage. He developed a grand vision of the Potomac River as a pathway to promote “social, political, and economic ties between the Eastern Seaboard and the new territories” in the west. Quite early in his life, Watson believes, Washington developed a “continental vision.”

During the French and Indian War (1754–1763), Washington the surveyor became Washington the soldier and leader of men. His military career had an inauspicious beginning—suffering defeat at Fort Necessity in Western Pennsylvania. But he more than redeemed himself at the Battle of the Monongahela, where he “saved hundreds of soldiers from certain death or capture” after General Edward Braddock had led British soldiers into a trap. Washington repeatedly exposed himself to enemy fire and had two horses shot from under him as he led troops to safety.

His reputation as a soldier and leader spread throughout the colonies. When America began fighting for its independence from Britain in 1775, Washington was selected to lead the colonial army in a desperate struggle against the world’s mightiest empire. He met that challenge after suffering terrible defeats in New York, surviving the ferocious winter at Valley Forge, and overcoming growing doubts about his military abilities.

Washington kept the army together as a fighting force while American diplomats achieved alliances with France and Spain. He delivered the final blow to the British at Yorktown with the crucial assistance of the French Navy, but his army was unpaid and restless.

Watson recounts the circumstances of the Newburgh mutiny, when army officers conspired to march on Congress unless they were paid. It was perhaps Washington’s finest hour. He confronted the mutinous officers at a at Temple Hall in New Windsor, New York, a few miles from Washington’s headquarters in Newburgh. Before reading a letter from a congressman promising to pay the officers, Washington reached for his glasses and asked their pardon while he placed them on his face because, he told them, he had not only grown gray but nearly blind in the service of his country. Officers wept and the mutiny ended. The democratic experiment was, at least temporarily, saved.

After the war, Washington retired to Mount Vernon instead of seizing or seeking power. When told that this was Washington’s intention, British King George III remarked that if Washington did that he would be the greatest man in the world.

The new nation’s capital had been Philadelphia during the war, but had to be moved several times due to the exigencies of the conflict. Under the Articles of Confederation, Watson notes, Congress met in Philadelphia, Princeton, New York, and Annapolis. When sectional rivalries and the flaws of a weak central government resulted in the framing of a new Constitution, the question of where the permanent capital of the United States would be located was revived.

Article 1, Section 8 of the Constitution granted Congress the power to create a District not to exceed “ten miles square,” to house the nation’s capital. Thus began what Watson calls “the great debate” over which city would be chosen as the capital. Congress initially selected New York City as the capital, but it proved to be only a temporary site. The permanent capital would be determined by politics and George Washington’s vision.

During much of the great debate, Washington acted behind the scenes to maneuver Congress to choose his Potomac River location. Watson compares Washington’s approach here to that of a later soldier-statesman, President Dwight Eisenhower, whose skillful “hidden-hand” politics enabled him to wage partisan political warfare while seeming to be above the fray.

Washington relied most heavily on his most trusted adviser, Treasury Secretary Alexander Hamilton. With Washington’s encouragement, Hamilton proposed a grand compromise to Thomas Jefferson and James Madison that placed the capital temporarily in Philadelphia and permanently at Washington’s favored location on the Potomac, empowered the federal government to assume the debts of the individual states, and excepted Virginia and other southern states from contributing to debt payments.

Watson compares this compromise of 1790 to the Missouri Compromise of 1820 and the Compromise of 1850—they all, at least temporarily, saved the nation from dividing along sectional lines. Here, again, Watson overreaches. The debate over the location of the capital in 1790 was divisive, but not nearly as divisive as the issue of slavery was years later.

Washington’s chosen site at that time was little more than “forests, marshland, and pastures.” He selected Pierre Charles L’Enfant as the architect for the capital. He was a brilliant architect, but arrogant, ill-mannered, and unwilling to listen to anyone, including the president. He shared Washington’s grand vision for the capital city but on his terms. Washington ultimately removed him and replaced him with Andrew Ellicott.

Washington selected the site for the “President’s House” and the Capitol Building, and contributed to their design. Watson, again overreaching, writes that Washington “devoted much of the . . . decade almost singly focused on building a great capital city.” No, he could not afford to “singly focus” on any one subject given the Franco-British war, sectional rivalries, and the growing political disputes within his own Cabinet.

Regrettably, much of the clearing for and construction of the new capital city was performed by slaves. There were also cost overruns, something that later became endemic to federal spending. And the conflicting visions of what the nation’s capital should look like further divided Washington and Jefferson (who wanted a more modest capital).

Washington did not live to see the new capital city, but as Watson points out, it was Washington’s great vision and political skill that led to the creation of Washington, D.C. In this endeavor, too, he was the “indispensable man.”