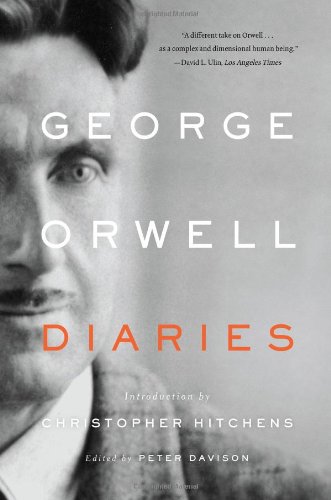 “. . . the contents of these diaries do nothing to fill in gaps of knowledge about the man, his work, or his beliefs. A cypher he was. A cypher he remains.”

While completists are bound to be pleased, and while it is in theory laudable to collect all the diaries of someone notable, the simple reality is for readers like you and me, reading the George Orwell Diaries represents a challenge not unlike scaling Mt. Everest.

In his brief lifetime, Orwell managed to fill some 11 journals on various topics. He filled notebooks on the subject of his domestic life, often based (mired, really) on his passion for horticulture and his interest in farming and farm animals.

He also recorded journals of his various travels, although these, like this domestic diaries, relate more on the subject of the flora and fauna of various places than they do the nightlife or literary gossip.

Indeed, from his journals, the reader would assume that Orwell had no real interest in writing or literature or those who produce it, except for the occasional nodding reference to his own output. In fact, those unfamiliar with Orwell’s writings may mistakenly come away believing he was most notably a gentleman famer.

Thus the reader for much of the 600 pages of journal entries wades through information like this, concerning the author’s attempts at raising chickens and goats while living in Morocco:

The surprise here, of course, is that second egg on November 6.

Admittedly, Orwell’s journals convey more information than just the egg laying on any given day.

They also tend to relate the weather on that day as well:

The journals come to life, startlingly, powerfully, and suddenly, with the onset of World War II. And Orwell’s War-Time Diary, dated from May 1940 through August 1941 makes for remarkable reading:

“9.17.40: Heavy bombing in this area last night till about 11p.m. . . . I was talking in the hallway of this house to two young men and a girl who was with them. Psychological attitude of all 3 was interesting. They were quite openly and unashamedly frightened, talking about how their knees were knocking together, etc., and yet at the same time excited and interested, dodging out of doors between bombs to see what was happening and pick up shrapnel splinters. Afterwards in Mrs. C’s little reinforced room downstairs, with Mrs. C and her daughter, the aid and three young girls who are also lodgers here. All the women, except the maid, screaming in unison, clasping each other and hiding their faces, every time a bomb went past, but betweenwhiles quite happy and normal, with animated conversation proceeding.”

But would that they had more to tell us about the man himself.

George Orwell has always been something of a cypher. The author of two now-classic novels, Animal Farm (the manuscript for which, Orwell reports, the Nazi bombs left in a “slightly crumpled condition” after a bomb destroyed his flat in July 1944) and 1984, was born Eric Arthur Blair on June 25, 1903.

Reportedly an odd and unhappy child, he was bright enough to win a scholarship to Eton, but unable to fit in to the British class system even though his grandfather had been a man of considerable wealth.

Sadly, the contents of these diaries do nothing to fill in gaps of knowledge about the man, his work, or his beliefs. A cypher he was. A cypher he remains.

He was by all reports a man of political passions and indeed, his 1936 journal entries on his observations of the lives of miners are as instructive and moving as any of his essays or works of fiction:

“G. told me a dreadful story of how a friend of his, a ‘detailer’, was buried alive. He was buried under a fall of small stone, and they rushed to him and, though they could not get him out completely, they got his head and shoulders free so that he could breathe. He was alive and spoke to them. At this moment they saw that the roof was coming down again and had to take to flight themselves. Once again he was buried, and one again they managed to get to him and uncover his head, and again he was alive and spoke to them. Then the roof came down again, and this time they did not get him out for some hours, after which, for course, he was dead. But the real point of the story, from G.’s point of view, was that this man had known beforehand that his part of the mine was unsafe and likely to bury him: ‘And it worked on his mind to that extent that he kissed his wife before he went to work. And she told me afterwards that it was the first time in years he kissed her.”

But this Orwell, the man who named himself George for the patron saint of England and took Orwell from the name of a local river, is too much absent from these pages.

He is here, early on, in the “Road to Wigan Pier Diary,” that would be source material for his book on the impact of the Depression on the lives of the British Working Class, but soon fades into the odd meanderings of domestic life.

Would that editor Peter Davison been more selective with his subject matter. The World War II diaries would have made for a much more powerful and more valuable short edition, as would have the aforementioned “Wigan Pier” diary. Separately or together they would have not only given some insight into the man, but also stood as historical documents to their place and time.

Instead, what we get is the bloated, exhaustive, and exhausting unreeling of the minutiae of life among the clematis, the goats, and the chickens. Something that might have been better and more honestly called, The Eggs and I.