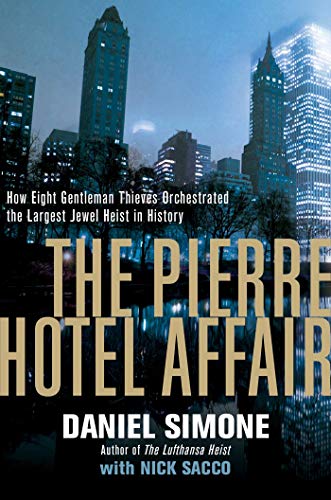 If you loved the television series Mad Men, hanker for a time when jewel thieves were referred to as “gentlemen,” and wish all business lunches revolved around three or more martinis, then it’s likely you’ll find something to like in this outrageous true life tale of the night a gang of jewel thieves literally took over the Pierre Hotel, still one of New York’s most prestigious institutions.

The word caper comes to mind when reading this book and that’s not a bad thing, not at all. It’s a story buried in another time of the city’s past even though it took place in the 1970s, which doesn’t seem too far in the past to some of us. In this day of omnipresent cameras and cellphones, this kind of brazen robbery could never have taken place.

But it was another time and it’s a fact, which is why this book is uber entertaining. This stuff really happened!

In the early morning hours of January 2, 1972, a gang of thieves—backed by local mobsters and led by Bobby Comfort and Sammy “the Arab” Nalo—literally took over the Pierre Hotel. The gang, wearing disguises, had planned it out and knew only a skeletal staff would be on duty. Once they neutralized all of the hotel’s employees—which took about 15 minutes—the thieves had the hotel all to themselves and made a beeline for the safe deposit boxes where hotel guests had stashed millions in jewels.

Getting into the safe deposit boxes was a breeze. Everything else was a problem. After taking over the Fifth Avenue hotel, the gang had to deal with the guests and, like any hotel employee can tell you, THAT was the big problem.

One lothario was cheating on his wife on their honeymoon with a girlfriend he had stashed in a separate room. He had to be up and sneaking around in the wee hours. Another elderly woman celebrating a birthday called for room service and was intent on seducing whoever came to the door. It happened to be a gang member but she didn’t know that and, frankly, didn’t care.

Another guest was having a heart attack. That necessitated waking a different guest who was a doctor. Problem was the doctor was on vacation and liquored up. He didn’t want to get out of bed and, when he did, he informed the thieves that the heart attack victim must get to a hospital or he’d die. The gang didn’t want to risk having a murder on their hands so they actually called 911 and welcomed the cops and paramedics in, all the while pretending to be members of the staff. The word “audacious” only scratches the surface.

The gang somehow pulled it off, leading to a lot of questions for the police in the days to come. How was it they responded, filled out the paperwork (dutifully signed by the thieves using false names) and watched as the guy was put into an ambulance and did not notice that a major jewel heist was up and running?

Seemingly everything that could go wrong during and after the robbery did go wrong and, still the thieves made off with the loot, as the author might say. This was a fun read and written in a tongue in cheek style that mimicked the language of the day. Of course, nearly everyone had a nickname and the waitresses sometimes leaned over and shook their “pompoms.”

The author Simone also gets deep into the personal lives of the thieves, particularly Comfort and Nalo, not surprising since his co-author Nick “The Car” Sacco was the sole surviving thief from the big heist. Their lives were complicated with wives crying, girlfriends demanding, and friends pulling fast ones on each other. As someone once observed, it seemed easier to go straight.

And by the way, there is no honor among thieves, but you knew that.