The General vs. the President: MacArthur and Truman at the Brink of Nuclear War 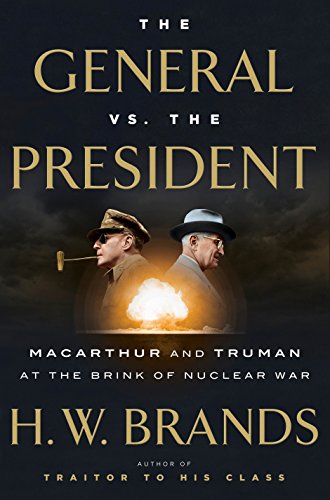 There has been a spate of books published during the last few years about the life and career of General Douglas MacArthur. The latest to appear, H. W. Brands’ The General vs. the President, focuses on the circumstances that led to President Truman relieving MacArthur of command during the Korean War.

MacArthur in Tokyo subsequently learned of his firing when an aide heard about it from a radio report—a more undignified way to inform one of America’s greatest and most decorated soldiers would be hard to imagine.

The dispute that led to Truman’s action had been building since communist China’s armed forces massively intervened on the side of North Korea in October–November 1950.

MacArthur signaled Washington that U.S. and UN forces were now engaged in an “entirely new war,” and requested additional U.S. forces, the use of Nationalist Chinese forces from Formosa (Taiwan), and the authority to broaden the use of air and sea power to achieve victory.

Washington balked. President Truman, the Joint Chiefs, and top civilian advisers, concerned that widening the war could lead to World War III and a nuclear exchange with the Soviet Union, gradually altered the political goal of the Korean War from victory to a negotiated peace.

The result was stalemate and slaughter without the effort to achieve victory. This was anathema to MacArthur who famously included in a letter to a Republican member of Congress that “In war, there is no substitute for victory.”

Brands takes the conventional view that Truman and the Joint Chiefs were right and MacArthur was wrong. He assigns political motives to MacArthur (who indeed had presidential aspirations), but overlooks Truman’s and his administration’s political motives.

Truman, after all, had waged war in Korea without mobilizing the country and seeking a declaration of war, initially referring to the conflict as a “police action.”

He was under political assault by Republicans and conservative newspapers for “losing “ China to the communists and tolerating high-level communist infiltration of the government. The Democrats had suffered significant losses in the 1950 mid-term elections.

Truman had basked in the glory of MacArthur’s dazzling triumph at Inchon. In the wake of Inchon’s success, Truman, the Secretary of Defense, the Joint Chiefs, and the UN authorized MacArthur to wage war in North Korea up to the Yalu River (the border with China) with the goal of reunifying Korea under Syngman Rhee’s leadership.

When Truman’s war started going badly, the President and his top advisers, without a plan or strategy for victory, needed a scapegoat.

Some historians and Truman partisans have suggested that MacArthur’s decision to use U.S. troops in the drive to the Yalu provoked China to entering the conflict.

Brands points out, however, that while the Joint Chiefs as a matter of “policy” told MacArthur to avoid using U.S. forces near the Chinese border, Defense Secretary George Marshall assured MacArthur that he should feel “unhampered tactically and strategically” in waging war north of the 38th Parallel.

Moreover, as Arthur Herman noted in his recent biography of MacArthur, Chinese leader Mao Zedong was committed to the war the moment the first American troops set foot on the Korean peninsula. “[W]idening the war in Korea,” Herman writes, “was a Chinese operation from the beginning.”

When more than 200,000 Chinese forces attacked across the Yalu, both MacArthur and Washington were caught by surprise. MacArthur, however, was right: It was an entirely new war.

Far from being “unhampered tactically and strategically” in waging war, the administration increasingly imposed restrictions and limitations on MacArthur’s tactics and strategy. While MacArthur complained about this to his immediate staff and at times to Washington, he never disobeyed an order from Truman or the Joint Chiefs.

Truman’s relief of MacArthur did nothing to improve the war effort; more U.S. soldiers died after MacArthur’s firing than before it. Truman never achieved a negotiated peace. It took President Eisenhower and the threat of nuclear attack to persuade the Chinese and North Koreans to end the fighting.

In Brands’ view, Truman was the hero of Korea. “Truman hadn’t yielded to communist aggression in Korea,” he writes, “but neither had he panicked and let himself be stampeded into World War III, by Douglas MacArthur or others.” Truman’s firing of MacArthur was a “bold stroke . . . [that] sustained hope that humanity might survive the nuclear age.” That is the conventional view.

But it is not the only view. “History has largely swallowed President Truman’s version of events,” wrote British historian Robert Harvey, “and a popular image of MacArthur lingers as the half-crazed anti-communist . . . who nearly started the Third World War, spurned his President’s orders and even contemplated the nuclear bombing of China. The truth . . . was very different.”

MacArthur’s confrontation with Truman, contends Arthur Herman, “has been as much misrepresented by historians, even military historians, as it has been misunderstood.” “[T]here is very little in MacArthur’s actions,” Herman continues, “that can be characterized as deliberate disobedience, let alone a challenge to civilian leadership of the military.”

D. Clayton James, MacArthur’s most comprehensive biographer, characterized the portrayal of MacArthur as a warmonger who was intent on using nuclear weapons against China and starting World War III as a “canard.” James concluded that while MacArthur differed with Truman over strategic priorities and the direction of the war, “their collision had not posed a serious menace to civilian dominance over the military.”

Harry Truman as president oversaw important policies and made significant and difficult decisions that confronted Soviet aggression in the early years of the Cold War. For that, he has justly received much praise from historians.

The legacy of the Korean War, however, is far less clear. Truman’s concept of “limited war” was followed in Southeast Asia with disastrous results. Indeed, it shadows our recent and current wars in Iraq and Afghanistan. With the exception of the first Gulf War in 1990–91, the United States has not achieved victory in war—what MacArthur sought in Korea—since World War II. Brands, unfortunately, does not address this legacy in the book.