The Gay Revolution: The Story of the Struggle 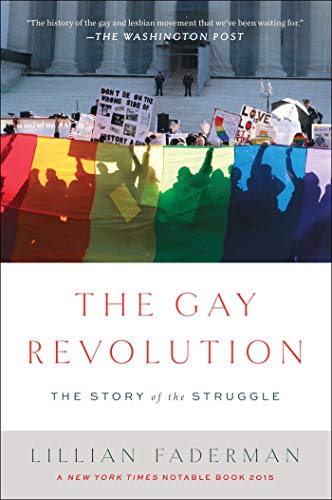 Lillian Faderman received the 2016 Anisfield-Wolf Book award for The Gay Revolution. That alone makes this book worth reading. The award recognizes works that contribute to an understanding of racism and cultural diversity. It is one of the most prestigious awards for nonfiction books.

This is not a beach read. It is a well-researched, detailed analysis of the LGBT community's battle for civil rights. Faderman’s analysis starts in the 1950s and ends with the marriage equality decision. Faderman discusses the evolution of language, from homosexual and homophile, from gay to queer. This book tells the story of individuals who rebelled against being society's outcasts. In the beginning, those efforts were clandestine because no one wanted to be “out.”

Faderman tells the story of individuals who rebelled against their role as society's outcasts. Initially, those efforts were clandestine because fear was a controlling factor and no one wanted to be “out.” Faderman recreates conversations between the people who led these efforts. This includes discussing the small victories and major defeats.

The stories range “from the days when a much-loved and gifted professor could be disgraced . . . and hounded out of his profession . . . to the days when a military officer could marry the woman she loves in broad daylight and be promoted . . .”

Faderman uncovers the seed from which the fledgling LGBT civil rights movement erupted. As it progressed thousands of people—gay and straight—endured considerable heartache. She peels back the curtain around the inane reasons used to justify discrimination. Those same reasons exist today and all of them fail to survive any rational review.

Faderman devotes considerable time in developing the gay rights revolution story. But her detailed historical account leaves little room for any discussion of recent developments. The book preempts the contributions of women in the early battle for gay rights. There is a cursory overview of transgender issues. The lack of a more detailed discussion on these topics is unfortunate.

This is a reference book. Faderman sometimes delves too far into the weeds making this book, at times, a tedious read; however, it gives readers the context they need to understand the LGBT civil rights movement. Many consider The Gay Revolution to be the definitive work on the subject.

The pace picks up when Faderman begins writing about events since 2004. For all practical purposes, the greatest advances in LGBT civil rights have come because of court decisions.

Following the earliest efforts to gain basic rights, the author is excellent in describing the advances that occurred in the 21st century when marriage equality and the right to serve openly in the U.S. military became focal points for the LGBT community.

The stories include one about Del Martin and Phyllis Lyon who finally were allowed to marry in 2004 after a 52-year courtship. There is Sharon Kowalski’s eight-year battle to win the right to be her disabled partner’s guardian. And there is Miriam Ben-Shalom, one of the first female drill sergeants in the U.S. Army, who fought for 13 years to complete the eleven months of her three-year enlistment.

Lillian Faderman has produced a work of unparalleled breadth and depth. The Gay Revolution may be the quintessential history of the U.S. gay rights movement. Faderman closes the book with a few paragraphs about Obergerfell v. Hodges, the marriage equality decision. Even then, the author reminds readers that opposition continues when she quotes presidential candidate Mike Huckabee who promised, “The fight is not over.”

The fight may be ongoing but Faderman’s book gives readers the necessary foundation to understand where the battle began and provide the impetus to see the fight to its ultimate, successful end.