Gay, Catholic, and American: My Legal Battle for Marriage Equality and Inclusion 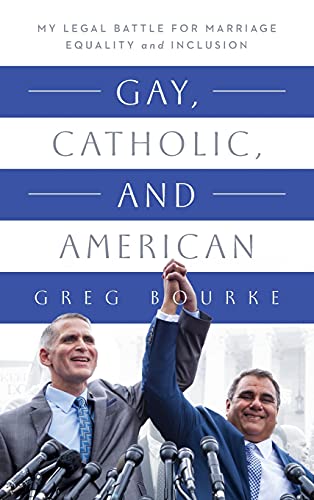 “Gay, Catholic and American is a book about both past and ongoing struggles for LGBTQ+ equality, and reminds readers that these battles are important, even, and perhaps especially, when they are being waged at the most local level.”

Greg Bourke is the most prominent gay activist that you’ve probably never heard of. He and his husband, Michael De Leon, were one of the plaintiff couples in Obergefell v. Hodges, the landmark Supreme Court case that cleared the way for same-sex marriage equality in the United States. He was also instrumental in causing the Boy Scouts of America to soften their position on gay scouts and scout leaders. In addition, he has spent decades battling the Catholic Church in an effort to get them to be more inclusive of LGBTQ+ people in their policies.

Of the three causes dear to his heart, Bourke has only been fully successful in one: He and his husband (and thousands of other gay and lesbian couples) now have a marriage that is officially recognized by both their home state and the federal government.

Additionally, thanks to the activism of Bourke (among many others) the Boy Scouts no longer have an outright prohibition on gay men being scout leaders—though the BSA has split the baby; the position now is that the organizations that sponsor local troops get to decide the matter, and since many of those organizations are churches (including Catholic churches), the victory is less than total. As for Bourke’s desire that the Catholic church rethink its positions on LGBTQ+ people, perhaps the less said about that the better.

In reading Bourke’s memoir and witnessing time and again his desire to achieve full membership in groups that don’t want him, readers might very well find themselves torn between admiring his persistence and wondering what manner of masochism could lead him to persist. This is especially notable with his dogged efforts to engage the Catholic church, particularly since so many gay-inclusive denominations exist, ranging from the Metropolitan Community Church to the far more mainstream Episcopal Church. Evidently, this is a question he and his husband, Michael De Leon, have encountered before, because they have a ready answer: “If we leave, they win.”

The primary strength of Gay, Catholic, and American is that it is a first-person account of a man who has been involved in many battles for LGBTQ+ equality, ranging from Supreme Court down to trying to get the local Catholic cemetery to allow Bourke and his husband to be acknowledged as spouses on their headstone. Additionally, most books about the political struggles of queer people focus on events in major urban areas such as New York, Washington D.C., or San Francisco. Bourke, as a native and lifetime resident of Kentucky, brings a badly needed balance to this point of view.

A weakness is tha while Bourke was on the front lines, he is not particularly good at describing personal or political strategies. At times, the book seems little more than a list of events. (A much stronger book in describing the strategies that led to marriage equality is Sasha Issenberg’s The Engagement).

Bourke is also not adept at creating either scenes or characters. There are no more than half a dozen lines of dialogue in the entire book, physical descriptions are nonexistent, and people’s interactions with each other are summarized in the most cursory manner. This is even true with Michael De Leon, Bourke’s husband, with whom he has shared a life for more than four decades. What is their relationship like? What brought them together when they were young undergrads? Did they first bond over a love of books, or nature, or The Rocky Horror Picture Show? What do they have in common, other than a shared desire for full inclusion in the Catholic church? We know they have two adopted sons, but those boys, along with De Leon, remain vague, barely sketched background characters who show up at the necessary moments, but who almost never say or do anything specific to catch our attention. Strictly speaking, none of that is necessary to tell the story, except that, in order to share Bourke’s desire for success, we really should have a stronger sense of who in his life it involves, and why we should care about them.

These flaws, though, do not prevent the book from being enormously interesting and important. Gay, Catholic and American is a book about both past and ongoing struggles for LGBTQ+ equality, and reminds readers that these battles are important, even, and perhaps especially, when they are being waged at the most local level.