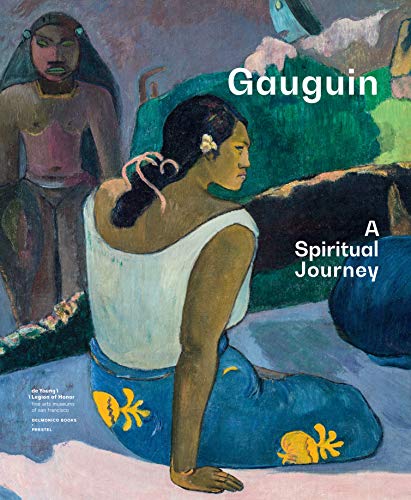 “does an admirable job making connections between Gauguin’s artwork, the international settings, and sculptural artifacts.”

Gauguin: A Spiritual Journey is an exhibition catalog showcasing the cooperative efforts of the NY Carlsberg Glyptotek Fine Art Museum in Copenhagen, Denmark, and the de Young Fine Arts Museum in San Francisco, CA. Two things may strike as curious. First is that Paul Gauguin (1848–1903) was French, so why are Danish and American museums the forerunners? Second, the Glyptotek, a sculpture museum, is an interesting choice for a monograph on a renown painter.

Answers to these questions unfold through six of the seven essays, which are organized based on specific time periods of his career starting between 1870– 1885: France and Copenhagen and ending between 1895–1903: Tahiti and The Marquesas. Excellently reproduced illustrations are generously doled out between and within essays giving the book great balance of text and visuals.

Born in Paris, Gauguin’s family moved to Peru when he was still a toddler. When his father died en route, he lived with his mother and older sister in a wealthy setting. A close relative was the president of Peru and Gauguin benefitted from nursemaids and servants until he was six, when his family fell from power. His mother took him back to Paris, and he was sent to a Catholic boarding school. Wanderlust overtook him and he served in the French navy. Afterward he made a generous living in Paris as a stockbroker.

The Copenhagen connection occurred in 1873 when he married a Danish woman, Mette Sophie Gad, and had five children with her over ten years. At the eleven-year mark, Gaugin decided to quit his career and pursue his painting hobby full time. He moved Mette and family to Denmark but only lasted a few months before leaving her there to run the family on her own. It was Mette, then, who was diligent in procuring a presence for Gauguin with the dealers in her hometown.

Gauguin was determined to find his own painting style and the search took him farther and farther away from Paris society into a “savage” land, which to him was sure to be Tahiti. However, when he arrived he was sorely mistaken, disappointed, and shocked at the amount of Europeanization that had already occurred. He never did find an unadulterated native beauty or a pure primitive island spirituality which the French had not already decimated. He died unsatisfied in his quest.

Gauguin’s artistic transformation is quite amazing and well documented. From the Impressionist influences to a Synthetist look of flat patterns and a sojourn with Vincent van Gogh’s wild strokes and raucous colors mixed in, Gauguin’s mission was to be distinctive. Not a one-dimensional artist, Gaugin used carved wood and modeled clay to eke out his creative impulses.

He was interested in the exotic essence of a subject and would attempt to capture it in any form he could. It was this exoticism that he felt he could sell to the Parisian art market and he made a handful of trips back and forth to organize exhibits and sales, to build relationships with other artists and dealers. He continued to explore wood cuts, ceramics, and even literary endeavors to garner the attention of the French.

There are a number of interesting artifacts in Gaugin’s paintings. Bowls, vases, relics, totems, and stone and wood carved figures all made an appearance in still life, landscape, and portrait scenes. The power of this particular exhibition is in the presentation of the collection of items that correspond to those in Gaugin’s artwork. This is where the Glyptotek comes in with a fine showing of stunning sculptural items either by Gaugin’s hands or those of a native South Pacific islander.

There is one outlier to the collection of writings in Gauguin: A Spiritual Journey. The reader will sail smoothly along enjoying well-written observations and academic findings written by a professional group of curators, professors, gallery managers, and a conservation expert. All use a third person descriptive voice, plenty of citations and relevant topics respective to the time frames.

Until Yuki Kihara, an interdisciplinary artist, tosses in a screwball contribution to the 1893 –1895: Paris and Brittany section. Smooth sailing comes to a screeching halt as “First Impressions: Paul Gaugin” heaves a heavy anchor, dragging down the catalog’s positive momentum. This is the only essay that is a first-person opinionated rant of present day (2018) issues within the LGBTQ community in the Moana and Maori regions. Global warming, colonial cultural contaminations, and detrimental exotic stereotyping are all somehow blamed on Gaugin’s imaginative paintings, which the author even admits are fictitious.

Gaugin here is held in a negative context as the “symbol of Western patriarchy in the Pacific.” Did Kihara not read the other six essays that consistently demonstrated Gauguin’s visceral disgust toward the French colonization and contamination of the island nations? This article is a misfit, thwarting the integrity of an otherwise very intelligent and consistent project.

Ultimately, Gauguin: A Spiritual Journey details the museum-worthy successes Gauguin created throughout his quest for an exotic yet deeply personal experience. The catalog does an admirable job making connections between Gauguin’s artwork, the international settings, and sculptural artifacts.