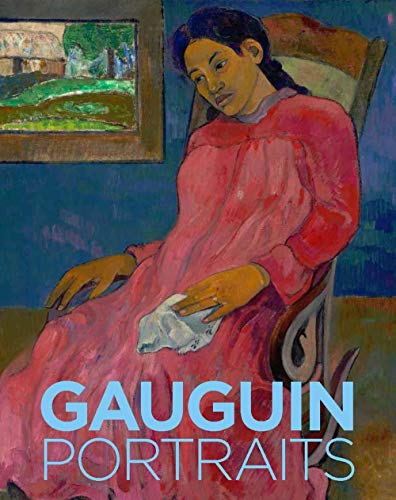 “Paint[s] an engaging picture of an artistic master who, for a figurative painter, was as generous with precise detail, symbolism and personal motives, as he was with color, while never distracting from the genius of his work.”

If you ever hoped for a book that truly reflected an exhibition, that closely matched the emotional wallop of standing in art’s presence, moving you as the work itself did if you were lucky to be there—and if you weren’t, making you feel as if you were being transported to it the moment you opened the first page—then this is it.

Gauguin: Portraits, edited by Cornelia Homburg and Christopher Riopelle, is more than an art book or catalogue exhibit. It’s an idea that was born of interest in work existing in the permanent collection of the National Gallery of Canada, evolving into a global exhibit and in-depth investigation of the ways in which the French master approached portraiture, which is to say, personally.

Gauguin knew that self-expression always says more about the artist than about that of which he or she writes, paints, or composes. Through his portraits, he expressed his political fears and rages, his disquiet after falling out with a friend (Van Gogh), and his interest in religion (present in his superb, if sometimes disturbing, self-portraits). His likenesses helped him communicate his inner dialogue to the world in a focused way, a more directed, up-close way than via the broader-in-scope landscapes and scenes of people in action that grace so many of the best museums in the world today. (The intensity of the personal sentiments suggested in some of his portraits were later confirmed by the letters he wrote to his wife and friends, published posthumously.)

Along with his feelings about his subjects, Gauguin brought to his portraiture all the color and exuberance for which he is known. One hundred forty-three examples of this are included in this book, all in full, glossy, well-matched color, with full notations containing timeline, provenance, and geographical location of originals, the book itself produced in an extra-large, sturdy format.

There is also a thoughtful equilibrium between imagery and context here. In addition to the introduction, the book serves up 10 well-written, engaging essays delving deep, exploring beyond the places and periods of Gauguin’s life informing his depictions of the human (sometimes semi-human) face, as in the following instance by Alastair Wright in which we get the insight that amounts to the moment, the likely personal truth suffusing the artist’s literal and emotional point of view at the time of creation:

“Consider two painted eyes (see p. 24). One is all eager attention, its pupil and green iris set off against a dab of white paint that signals its orientation toward the world before it. The other, a dark void largely occluded by a swath of brown paint that spills over from the surrounding skin, seems blinded, or perhaps inwardly turned, self-absorbed rather than scanning the exterior world. Both, in fact, belong to the same face—Gauguin’s—as it appears in Self-portrait with Manao tupapau (ill. 2).

He made the picture while looking in a mirror, as we can tell by the reversal of the painting Spirit of the Dead Watching (Manao tupapau, ill. 88) on the wall behind him. In his divided gaze we sense the uncertainty of the effort to capture his self, the oscillation between experiencing his own gaze as active—as to some degree it necessarily is, for without an examination of the world of appearances there would be no picture—and apprehending that same gaze as introverted, as though his own eye were merely a blind and unseeing orb.”

This is the first ever exhibit and tome of Gauguin’s portrait work and it is fitting that every element—the essays and bibliographical information combined with the lush and generous photography arranged to maximize understanding of the work—conveys so many thought-provoking, intimate, little-known aspects of Gauguin’s life and work.

And this may just be the book’s most clever achievement: Painting an engaging picture of an artistic master who, for a figurative painter, was as generous with precise detail, symbolism and personal motives, as he was with color, while never distracting from the genius of his work.