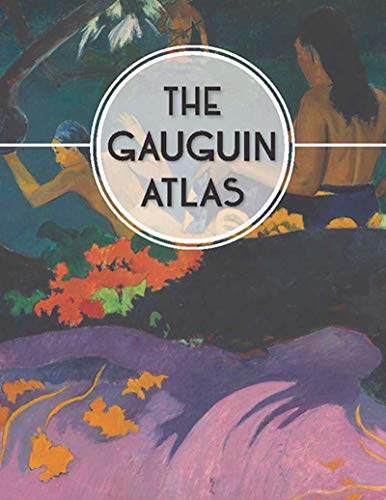 “offers one of the most well-rounded, entertaining, and creative presentations of Gaugin biographies on the shelves.”

Scrapbook collection extraordinaire! Paul Gauguin (1848–1903) has never been tracked and documented quite so diligently as he is in Denekamp’s sharply arranged atlas. In a book that could be easily targeted to middle-school students, Yale University Press is justified in elevating the marketing to include a wider intelligent and sophisticated audience. This is a winning combination of material and presentation.

Clever touches don’t skip a beat, not even at the outset; even the table of contents is worth studying. Essentially a timeline, the contents page spread utilizes color coding, flags, coats-of-arms, and date ranges that run parallel with the page count, and the reader can jump off or on at will without losing track of anything, almost as if they were following their subway ride from site to site on the London Tube map. Design and organization set the tone, and after lingering a bit to soak it all in, the reader hits the ground running alongside Gauguin’s every move.

Quickly we are launched with the infant Gauguin as he is brought on board The Albert in a two and a half month crossing from France to Peru as his father was fleeing the Bonaparte regime for being an outspoken journalist. Seems that outspokenness would run in the family, foreshadowing a dominant attribute in Gauguin’s prickly self-centered personality. The arrogance of his character is on full display as he spins like a whirlwind Tasmanian devil from port to port.

It is tempting to plow through the pages at a rapid clip, from outrageous intrigue to unseemly behavior, in the unnerving behavior Gauguin assumes. To do this though would miss the point of the atlas. Maps, letters, artwork, photographs, postcards, stamps, and an incredible array of documents pepper every page and it is clear that Denekamp has made a very wise choice in partnering with Yolanda Huntelaar, a graphic design genius from Amsterdam.

Huntelaar trains the reader so well, in fact, to expecting nothing but the best in providing as deep a picture as possible of the topic at hand, so that it’s almost disappointing when something is not given such attention. Where Gauguin makes a trip, that trip is given tokens of proof, souvenirs—a steamship passenger ticket, a postcard of the port of entry, a map with dots indicating the layout of the ship’s journey. Even a picture of the wooden shoes that Gauguin wore in his third-floor apartment that clogged and clomped around noisily, causing him to be evicted, are tacked into the collage.

Coming across a fascinating description of the options that were available to Gauguin as he determined to set sail to Tahiti from France, the reader will, by this point, be accustomed to looking for the corresponding graphic with a map visualizing the options. Gauguin could have traveled on a supply ship from Bordeaux to French Polynesia via Cape of Good Hope, Australia, and New Zealand and rocked back and forth on the ocean for no less than four months: slow and cheap. He could have departed on a ship from Le Havre to New York, taken a train to San Francisco, and then taken another ship the rest of the way for a total of six weeks: fast and expensive.

Or, the way Gauguin chose, to connection hop from ship to ship: average speed and average cost. With so many graphics abounding it’s a mild bummer that these route options are left untended, suspended only in text. A route comparison map would have been so interesting, instead they remain dangling in the imagination as a missed opportunity. This only proves just how effective the rest of the material is and how much fun it is to get lost in Gauguin’s 19th century ephemera. A tiny shout-out to translator Laura Watkinson, whose seamless English makes it unbelievable that this book was written in anything but.

Gauguin, this strange and wild-donkey man, was once described as a megalomaniac: delusional about his own power, omnipotence, and grandeur. The Gauguin Atlas certainly upholds this characterization and offers one of the most well-rounded, entertaining, and creative presentations of Gaugin biographies on the shelves.