The Gathering Wind: Hurricane Sandy, the Sailing Ship Bounty, and a Courageous Rescue at Sea 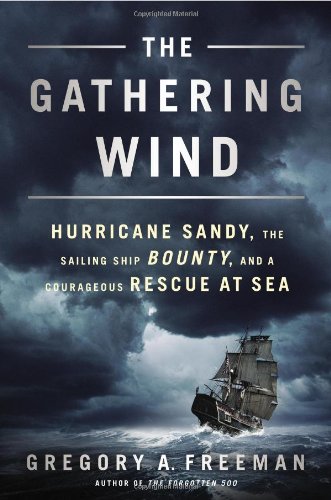 In October of 2012, a replica of the 18th Century sailing ship Bounty not only put to sea in advance of Superstorm Sandy, it deliberately sailed directly across the projected path of the hurricane.

The vessel sank in 30-foot seas, drowning Captain Robin Wallbridge who ordered the maneuver and novice crewmember Claudene Christian, believed by her family to be a distant descendant of mutineer Fletcher Christian.

In The Gathering Wind, journalist and nonfiction author Gregory A. Freeman turns this story of folly and Coast Guard courage into a gripping thriller and object lesson. Wallbridge risked a hurricane to try to meet an exhibition schedule and paid with his life. Christian’s family has filed a lawsuit.

The Bounty was built for the 1962 Marlon Brando film Mutiny on the Bounty and appeared in Pirates of the Caribbean films. It was one of the most famous tall ships, sustained by dockside tours.

But after a half-century of hard use, its still-impressive façade hid leaking seams, wood rot, underpowered engines, balky generators, and malfunctioning bilge pumps. It was so unseaworthy that it was not permitted by the Coast Guard to leave the dock if tourists were aboard.

Freeman wisely lets these facts speak for themselves, assembling a preponderance of evidence that calls to question the captain’s judgment while maintaining an objective journalistic tone. The Gathering Wind reads as a detailed, incisive, and fair job of reporting.

So damning are the accumulation of problems and risky decisions that the reader is left baffled by the loyalty of the 14 survivors to Wallbridge’s memory. He was clearly a charismatic and experienced sailor, but his self-confidence and past storm success led him to skirt the edge of regulation and prudence. “We chase hurricanes,” he boasted once. Of 50 tall ships on the U.S. East Coast when Sandy approached, only the Bounty put to sea.

In the narrative, the Bounty’s catastrophe gives way to the story of the Coast Guard rescue, in conditions so vicious that the aircraft were slimed with a layer of vomit by rescuers buffeted by hurricane winds. Swimmers plunged into monstrous waves to haul the Bounty crew to bucking helicopters.

Freeman is a fine writer, if not as fluid as Sebastian Junger in The Perfect Storm, and a great assembler of detail. We learn a great deal about the ship, storms, mechanical issues, Coast Guard heroics, and the people involved.

The prose briefly stutters. After a gripping opening of Bounty crew being hurled into the ocean, the book slows as Freeman sets up the disturbing prelude to sailing with repetitive detail. Key points are made again and again. Some later sentences become unwieldy from too many Coast Guard acronyms.

But once the storm hits and the Coast Guard lifts into the air for rescue, the story is harrowing, gripping, and told with admirable clarity. Lights die. Water relentlessly rises. Life rafts are almost impossible to climb into by crew sausaged in survival suits. Then the rafts flip upside down.

The recent grounding of the cruise ship Costa Concordia and cruise ship fires make this story relevant and troubling. Our assumption is that ships are safe—but only so far as human commanders are wise and cautionary.

Take Dramamine and set sail with this chilling and cautionary tale.