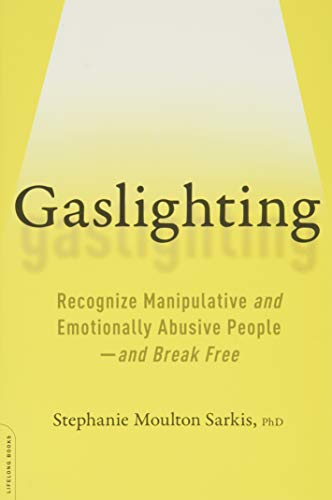 “Although this book might be painful to read for gaslighting victims and survivors, it will bring them out of the darkness and into the light, helping them heal . . .”

With or without our knowledge, most of us have met a gaslighter or two at some point in our lives or know someone who has been deceived by one. The scary truth is that these master manipulators are often our neighbors, friends, spouses, children, siblings, parents, co-workers, bosses, or political leaders. We may call them difficult, challenging, crazy-making, morally corrupt, narcissistic, power-hungry, or abusive because we don’t know enough psychology to give them the more precise label they warrant.

The term gaslighting, a type of psychological manipulation, is often associated with the 1944 movie Gaslight in which a husband cunningly and covertly engineers his wife’s life to make her believe that she is going crazy. Gaslighting by Dr. Stephanie Sarkis provides us with a chilling, up close and personal view of this disturbed and disturbing character-disordered population. Using quotes and occasional vignettes from her clients, she details characteristics of gaslighters, using enough real-life examples for laypersons to spot them in their own lives and in the lives of others.

Carrying psychiatric diagnoses of Histrionic, Narcissistic, Antisocial or Borderline Personality Disorder, gaslighters typically: rarely take responsibility for their mistakes or apologize for them, rope in others to do their dirty work, run hot and cold for no apparent reason, anger easily, lie even when they could tell the truth, pretend to be nice to win people over, mistreat subordinates, cheat, use people’s weaknesses to hurt them, hunger for power and control, intentionally confuse and undermine others via conflicting messages, con and connive their way through life, make threats, think only of themselves, lack empathy, bully and tease, use a double standard for their behavior and that of others, and demand loyalty from others whom they would throw under the bus to save themselves in a heartbeat.

Because gaslighters zero in on certain types of marks, Sarkis provides a thorough description of the traits of individuals who are most likely to be victimized by gaslighters. Victims generally are overly nice, naïve, dislike confrontation, trust blindly, only wish to see the best in people, incline toward people-pleasing and approval-seeking, innocently believe they can fix others, are overly responsible, hate hurting others’ feelings, and lack self-confidence and self-esteem.

Sarkis also explains in depth the strategies that gaslighters employ (which come as naturally to them as taking breath) to lure, hoodwink, and keep their victims securely joined to them at the hip. Strategies involve: covertly pitting people against each other while ostensibly promoting cooperation, placing people in emotionally paralyzing “double binds,” being nice one moment and nasty the next, isolating people from their support networks, and using other people as “flying monkeys” in order to make the gaslighter look good or avoid looking bad.

With their victims, gaslighters also engage in “love-bombing” which is showering someone with gifts and compliments initially and returning to this faux adoration whenever the person starts to pull away physically or emotionally; “hoovering,” a means of seduction that sucks and traps someone in as a vacuum cleaner would; and “stonewalling” which occurs after someone is hooked on them and involves retreating into deliberate, malevolent silence, and acting as if their bad behavior never occurred or being unavailable when their victim wishes to talk to them.

The book is well-organized into chapters about arenas where gaslighters do their dirty work: romantic relationships, in the workplace (bosses and co-workers), politics and society, cults and closed communities, families (parents, step-parents, children, and siblings) and friendships. Though Sarkis repeats some information in different chapters, repetition is not necessarily a negative, as she may feel a need to hammer points home to counter some readers’ unconscious reluctance to recognize that they are victims of gaslighting from people they know—and, in some cases, love.

Sarkis, who clearly knows her material inside and out, also spends time addressing readers who may be gaslighters themselves or who possess some of their traits from being raised by them. After all, as she instructs us, the desire to manipulate others is not confined only to people with anti-social personality disorders.

One of the most useful aspects of this book is its listing of resources for victims or survivors of gaslighting. Resources can be found for psychological, educational, and legal help regarding marriage, parenting, employment, sexual assault, cult involvement, and more.

Although this book might be painful to read for gaslighting victims and survivors, it will bring them out of the darkness and into the light, helping them heal in both psychological and practical ways. It is as much an eye-opener for novice clinicians as it is enlightening for the general citizenry who are trying to make sense of the surreal world of politics today.