The Gardens of Luciano Giubbilei 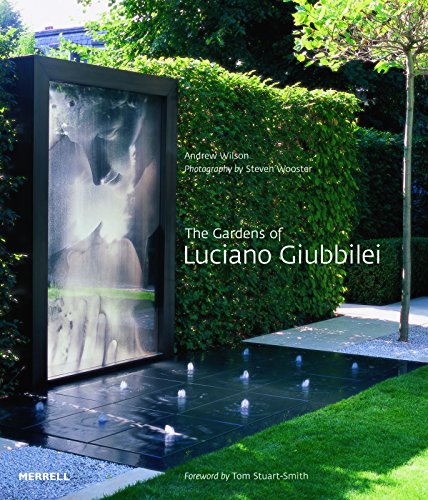 Since he opened shop as a London-based landscape designer in 1997, Luciano Giubbilei has built an impressive, international reputation with clients in Europe, Britain, North Africa, and America. His work is celebrated in Andrew Wilson’s The Gardens of Luciano Giubbilei.

The book begins with a brief biography of Giubbilei, charting his early childhood in Siena, his original plan for a career with a leading local bank in his hometown, and his evolution to a passionate landscape designer with a landscape degree from the London-based Inchbald School of Design.

Giubbilei began to realize his passion for landscape design at age 19 when his job delivering pastries throughout his native Tuscany gave him the opportunity to observe the landscape. Enchanted by the changes of light throughout the day, he began taking wide-angle photographs to capture those changes, as well as close-up pictures showing details of materials, architecture, and plants.

He lived next door to a vineyard and became interested in vine management and vegetable gardening. Wilson writes, “His fascination lay in the realization that the landscape was a combined effort between man and nature, and that the order and repetition of the vine rows corrugating the hillsides played against the undulating topography of meadows and copses in a theatrical way.”

Realizing that gardens were his future, he wangled a job in the 17th century garden at Villa Gameraia. Considered one of the most exquisite small Tuscan gardens, Villa Gameraia, and Balthazar Korab’s black-and-white photographs documenting the garden, have been a majorinfluence on Giubbilei’s work.

Fast forward to London. When he graduated from Inchbald in 1995, he was named Student of the Year. After a brief working stint with mentor Anthony Paul, Giubbilei started his own business, part of which was providing flowers for Giorgio Locatelli’s elegant London restaurant and seasonal plantings for customers living in the high-end Belgravia neighborhood of London.

His big break came just a year later in 1997 when a passerby liked a planting scheme he had done for a new restaurant. She commissioned him to create a garden for her house on Harcourt Terrace in London’s posh SW10 district. Happy with the results, the client introduced him to a network of clients and patrons, while the articles written about the garden published in international magazines such as House & Garden catapulted him into the international spotlight.

The book features 12 case histories of Giubbilei garden designs for London clients, as well as a rooftop space in Geneva, Switzerland, and a garden in Morocco. The first chapter looks at Giubbilei’s design process, giving readers insight into how he works. Interspersed with the case histories are chapters featuring the various artists whose work is represented in the gardens and a chapter on site development, looking at the nurseries he works with, the contractors, and craftsmen.

Hallmarks of Giubbilei’s designs include outdoor living and dining spaces that are, “influenced by architecture and interior design rather than by gardening and horticulture.”

The architectural influence also can be seen in his use of plant material such as rows of trees that work to divide and define spaces (thus making small city lots appear much larger than they are), and layers of shrubs shorn into stair-stepped tiers.

Another often-found feature in his gardens is rows of large funnel shaped biscuit-ware pots planted with shrubs sheared into globes, creating an architectural effect of repetition and rhythm. Large areas of paving dominate, along with furnishings, typically from Sutherland, the Dallas, Texas-based producer of luxury outdoor furniture.

Giubbilei’s gardens are pleasing, quiet oases in the midst of a noisy and busy city; however, they are not gardeners’ gardens. They lack a personal touch and intimacy as well as any expression of the personality of the owner. They are statement gardens, like a choice piece of jewelry, tasteful, expertly conceived with superb bones, and executed with perfect proportion and balance. They bring to mind the 17th century French gardens of Louis XIV and his ilk, gardens that were designed to speak of control, power and wealth. In addition, there is a sameness to the designs, each garden a variation on a theme.

The notable exception to the similarity of most of Giubbilei’s designs is the Moroccan garden. There he took an ancient grove of olive trees that was an established feature of the landscape and added magic. That garden shows growth and new ideas in Giubbilei’s design palette. In it, he has taken his design esthetic and elevated it to another realm.

The text by Andrew Wilson explains the ideas that inform Luciano’s work, and the artists that inspire his designs, but it is the photographs by Steven Wooster that make this book a winner. Wooster’s photographs use light to capture and effectively enhance Giubbilei’s designs. Some of the photographs revel in the glow of long angled evening light (love the backlit fountain grasses and the light-grazed olive tree trunks in the photos of the Moroccan garden on page 121), others show the shadows and patterns created by features such as the avenues of pleached trees, arbors, and other architectural elements in the gardens. It is through these pictures that the work of Giubbilei is truly revealed.