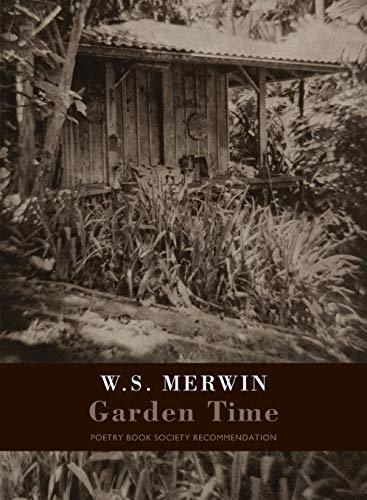 Few poets have been as honored as W. S. Merwin, author of 20 books of poetry and translation, twice U.S. Poet Laureate, winner of two Pulitzer Prizes, a National Book Award, and many other international awards. At age 90 he is still writing, still touring, and often speaking of human and environmental rights. He has translated Dante, Neruda, and ancient poets of China and Japan. Perhaps the most influential poet of his time, his work is always humble, personal, and yet mythical and spiritual.

Garden Time (co-published in the U.S. and England) is no exception, as it explores the conscious and semi-conscious worlds of age and wisdom. One enters Merwin’s world where the personal and mythic sense blend magically conveying a naturalness of all. He has always been one to use poetry to express the inexpressible, always with a sense of exploring the mind-body realm. Of note, Merwin’s absence of capitals and punctuation in his craft suggests a natural core of communication. Its charm is that it succeeds in bringing us further into his voice and transcendent world.

In “Pianist in the Dark” we sense the magic of music and nature:

Not only does he capture the core of music and movement, but by using his associative method he connects it with the way of nature. The fact that so many of his poems defy simple explanation testifies to the strength of his vision and method.

Though much of these poems take us into the garden of memory and awakening, rare do we find so autobiographical a poem of heritage and relationship, as “The Same River.” He images the river where:

And we trace the grandfather who follows the progress where “rails were laid between Pittsburgh/ and Erie but for my grandfather/ it was always the river that took him . . .” And we follow the family’s movement downriver and later recall:

The river is wide and long here as the poet finds its mythic essence in his life. Rare is Merwin so literal and historical, though some of his finest poems are of family and relationships. Another fine poem “The Blackboard” describes the loss of his father with the metaphor of writing erased on the blackboard then vanished in the dusting of erasers on the schoolyard.

A further aspect of this and Merwin’s other collections is the writing of fine love poems. “Here Together” is a beautiful tribute to the endurance and devotion of love for his wife Paula.

Though his profound sense of life’s movement and bonding of past-present-future have long been a part of W. S. Merwin’s work, in Garden Time he connects it with the eternal.