In the Garden of Spite: A Novel of the Black Widow of La Porte 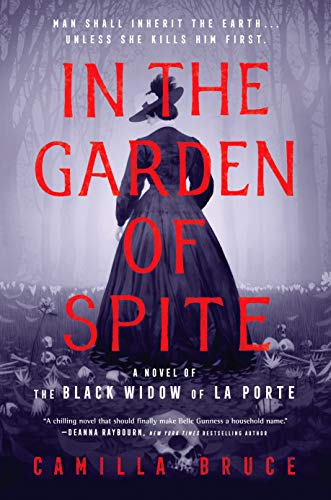 “a mashup of Norwegian noir and true crime at its finest, an amazing fictional account of Belle Gunness, one of the most prolific serial killers in history.”

Turn on the reading lamp, settle into a comfortable reading chair, keep the sofa throw at hand, and cancel your appointments. You're not going anywhere. This book is a mashup of Norwegian noir and true crime at its finest, an amazing fictional account of Belle Gunness, one of the most prolific serial killers in history.

And WOW! It's a stunner!

Most readers have probably never heard of Belle, and after reading the book, some may find it of interest to read the Wikipedia article about this complex character. The author's depiction of the Black Widow of LaPorte includes a possible explanation for her demented psyche that makes sense.

Brynhild Paulsdatter Storset of Selbu, Norway (who later changed her name to Belle, Bella in the book) experienced poverty, hunger, rape, a beating that kicked the child right out of her, followed by abandonment of someone she thought she'd marry.

"I do not know if I already bled when he left me by the water's edge, or if the bleeding began when I slowly tried to rise. . . . I had to stand up and get myself back home. I would not die . . . I would survive if only to spite him. . . . I wiped blood off my face with the hem of my skirt; tears and snot soaked the dark fabric too. A sharp edge was the only thing left where my tooth used to be; another tooth was clean split in half. . . .

". . . The nosebleed stopped, so perhaps it was not broken, but my jaw was swollen and tender to the touch. Then it was the real pain—the only one that mattered. Before long, it came in ripples and aches as my belly convulsed to rid itself of the damaged cargo. . . ."

These vivid scenes can't help but evoke sympathy in the reader, but Brynhild makes her way home after the beating to a father who doesn't have an ounce of empathy. (Which symptomatic of a serious psychiatric disorder, and perhaps could explain Bella.)

All this did not defeat her, that is, she did not curl up and sink into depression and anonymity. Instead, it caused her to sink into darkness and infamy.

The author's no holds barred fictional account might not be an easy read for some. She pulls no punches. And it's a long book, 468 pages, but so darn well put together with lurid details that readers will be compelled to keep reading. Like coming upon a gruesome car accident and being unable to look away.

The story takes place over the course of many years. Brynhild's sister Nellie had escaped the household via a marriage that had taken her to America. Brynhild longs for the same escape and after many years manages to make it. When she arrives, she is introduced to and envious of the lifestyle of Norwegian American women:

"I had seen much poverty in my life but never such wealth as I did in Chicago, where gleaming horses pulled shiny carriages with ladies in hats that carried whole forests of feathers and flowers. I saw beautiful houses and gardens bursting with green behind wrought-iron gates, department stores glittering with lights and smelling of rose and magnolia. . . ."

Bella wants that, and children, too.  She is unable to bear any due to the severity of that beating when she was a young woman, but lovingly collects children anyway. Not all of them stay with her. Not all of them live to adulthood.

Not all of her husbands live, either, which is why she comes to be known as the Black Widow of LaPorte. She marries many men in an effort to gain wealth at times luring them to her with a lonely hearts personals ad in a newspaper. Two versions of her advertisement appear in the book.

Here's the first one:

"PERSONAL—comely widow who owns a large farm in one of the finest districts in LaPorte County, Indiana, desires to make the acquaintance of a gentleman equally well provided, with view of joining fortunes. No replies by letter considered unless sender is willing to follow answer with personal visit. Triflers need not apply."

"WANTED—A woman who owns a beautifully located and valuable farm in first-class condition wants a good and reliable man as partner in the same. Some little cash is required, for which will be furnished first-class security. Address C. H. Scandinavien office."

When Bella tires of them or when someone better comes along, she easily and with no compunction disposes of them. She keeps a fairly good supply of rat poison in her barn and a pig pen out back comes in handy as an early version of a garbage disposal.

Sometimes, though, she merely chooses to punish them a bit:

". . .  I added a little laxative to his fish that night, and spent the next hours listening from my spot by the kitchen table as he rushed between the outhouse and the bed. . . ."

And by the way, in the book Bella does manage to exact revenge against Ander, the son of a wealthy landowner who originally impregnated her then refused to marry. Read the book to find out when and how she does this.

This book is bursting with truth, rumor, and myth, and will appeal to fans of lurid literature. True crime readers will love it.

It is believed the real Belle Gunness killed between 14 and 40 victims. The headless corpse found after a fire destroyed her house and barn was never proven to be her.

Be sure to read the informative and equally enjoyable Author's Note that was thoughtfully provided by Camilla Bruce in the back matter of the book in order to separate fact from fiction. In it, she says: "This, then, is not a novel about the truth. It's an attempt to understand how someone like Belle could have happened."