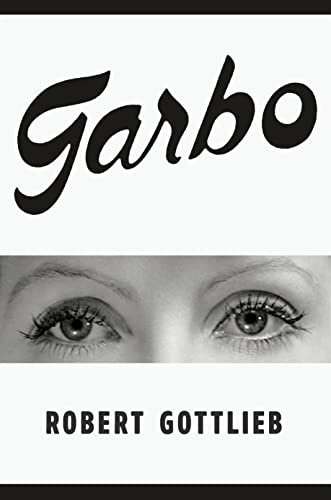 Greta Lovisa Gustafsson (1905–1990) grew up in a Stockholm slum, yearning to become “a great actress.” In his splendid biography Garbo, critic Robert Gottlieb shows how young Greta became something more.

She became an icon.

“More than any other star she invaded the subconscious of the audience,” he writes. “Wherever you look in the period between 1925 and 1941 Garbo is in people’s minds, hearts, and dreams.”

She is referred to in innumerable novels and memoirs—from For Whom the Bell Tolls to the letters of Marianne Moore. She is venerated by other Hollywood stars. “After a while she even lost her first name—no more Greta, just Garbo.”

First in silent films, then in (a remarkably successful transition to) talkies (“Garbo talks!”), she made 27 movies in the span of 19 years. At the age of 36, she retired, sealing her quiet fate as the mysterious “Swedish sphinx.”

Steeped in knowledge of the actress and her career, Gottlieb creates an elegant appreciation of Garbo in all her complexity: “She was a phenomenon, a sphinx, a myth, but also a Swedish peasant girl, uneducated, naïve, and always on her guard,” he writes.

A daydreaming child who disliked school and preferred playing alone, young Garbo would put on skits to entertain people in Stockholm soup kitchens. At the age of eight, she would walk for miles to theaters in the evening and stand at the stage door, “alone, for hours, just to watch the actors and actresses come in and go out.”

She was that determined to become a star. Poor, with no connections, she also suffered from extreme shyness. Yet she persisted, and Gottlieb tells how in vivid detail.

After appearing in Swedish films, Greta was recruited by MGM chief executive Louis B. Mayer, who brought her to Hollywood in 1925. She soon rose to silent stardom. Her role in A Woman of Affairs (1928), made her MGM’s highest box-office star, successor to the long-reigning Lillian Gish.

At the height of her fame, in the 1930s, she starred in a string of successful sound films, including Anna Christie, Mata Hari, Grand Hotel, Anna Karenina, and Camille, earning three nominations for the Academy Award for Best Actress.

She had become “an actress, not simply a spectacular look.”

With the help of more than 200 wonderful movie stills and other photos, Gottlieb brings all these films to life, detailing her frequently somber portrayals of tragic characters. His attention to small details and warm writing style will engross even readers unfamiliar with Garbo’s films.

The many contradictions of her life are endlessly fascinating.

“She was certainly in love with [the actor] John Gilbert, but she would not marry him, or anybody else,” writes the author. “She chose to spend almost her entire adult life in America, yet she had no real connection to it—only to Hollywood, on and off, for professional reasons, and to New York, where she was conveniently situated between California and Europe; she had no interest whatsoever in the rest of the country and knew almost nothing about it.”

He goes on: “She was spoken of as being austere, humorless, asocial, yet people who knew her well, going back to her childhood, talk about how much fun she could be, how she liked jokes, what a great laugh she had—when Garbo laughed, she really laughed. She was famous for her extraordinary movie costumes—setting fashions for women around the world in slinky dresses, preposterous hats—yet although she had closetfuls of outfits, she went around in slacks and men’s sweaters.”

He attributes much of her public silence to a sense of inferiority over her limited education. She nonetheless aspired to the cultural and intellectual life of her actress/earth-mother friend Salka Viertel’s famous salon in Santa Monica, where she mingled with European refugees like Thomas Mann, Stravinsky and Schoenberg, Chaplin and Billy Wilder.

As a bonus, Gottlieb appends a welcome section or articles and comments on Garbo from a range of sources.