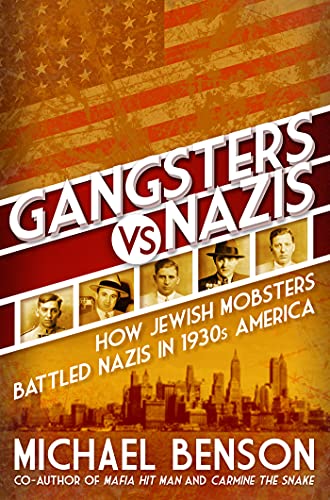 As the last of the World War II generation passes, important stories not told and sometimes suppressed will finally appear in print. Crime influencing the politics of the era, greatly expanded by the war, represents both. World War II proved as important an era for organized crime on all levels, including local syndicates, then during prohibition.

“Make no mistake,” author Michel Benson writes, “the gangsters in this book” Gangsters vs Nazis “are the good guys.” This particular Jewish community fought their war against Hitler and his anti-Semitic obsession on the streets of America in the 1930s.

Jewish immigrants in places like Newark, New Jersey, often became gangsters and protected their communities when the regular police did not. After the war, they played a major role in creating the state of Israel.

The Jewish American community first became substantial in the late 19th century, many from a number of central European countries. Most of these new Americans came from Russia, however, where laws had started to push them out in 1881. In America, Jews struggled in “the jobs they were allowed to have.” “They worked hard and remained poor.”

Within this much larger community, some “rebellious young men . . . took up career paths via which a Jew could become rich: show business, boxing, and, of course, the rackets.” Of the latter, they “formed gangs and fought over turf sometimes as small as one street corner.”

Benson briefly outlines the history of the rise of the Jewish gangsters as violent thugs who usually met violent ends. “Jewish gangs ruled their turfs and fought rumbles with rival gangs.” As the Nazis in Europe persecuted Jews, Meyer Lansky, the greatest of the Jewish gangsters and one the founders of New York’s infamous Five Families system, would wage war against America’s Nazis as he would any other gangs.

Anti-Semitism was widespread across the country, with over 100 anti-Semitic groups in 1933. They also denounced non-whites and their hateful message attracted non-Germans such as the members of the racist Order of the White Camellia. “In New York City, Newark, Minneapolis, and Los Angeles rallies terrified Jews.” On his popular national radio program, Catholic Priest Father Charles Coughlin regularly denounced Jews and supported the Nazis.

The 50,000 members of the German American Bund recruited and formed paramilitary groups. They promoted “the Third Reich’s noxious philosophies, first and foremost that the Jewish people were behind the world’s problems.” At that time, many Americans falsely blamed Jewish banks and Communists for the vast unemployment and misery of the Great Depression.

Americans had reason to fear that the American Nazis groups prepared to wage sabotage should the United States go to war against Germany. The Bund had a nationwide network of camps modeled after the Nazi youth training in Germany. Its public gatherings drew thousands of Americans and New York, of all cities but Berlin and Vienna, had the largest German speaking population in 1938.

Sometimes when the American Nazis met in their local chapters, they were assaulted by “a strike force of underworld soldiers, bosses, and well-known prize fighters” “carrying sawed-off pool cues, blackjacks, baseball bats.” “One thing an American Jew is bound to learn . . . is how to swing a baseball bat.”

Benson does not hold back on any of his views, describing, for example, the head of the German American Baud Fritz Julius Kuhn as “a loner, a womanizer, an alcoholic, and a man of poor character.” He and his fellow Nazis became the target of Meyer Lansky, Jewish and one of the greatest American gangsters of all time, at the urging of New York Jewish Judge Nathan David Perlman.

Perlman wanted no deaths. Although Lansky drew his army from the murderous young psychopaths of Charles “Lucky” Luciano’s infamous Murder Incorporated. He also recruited “walk-ins, stone-fisted fellows eager to ring a Nazi’s neck.” Perlman contacted other Jewish gangsters to disrupt Nazis gatherings in Chicago and across the nation.

These “soldiers” were trained to do their damage with fists, steel pipes, and baseball bats through “team building” exercises. Gangsters vs Nazis includes biographies of the thugs in Lansky’s “sette” that set out to find and mug known Nazis.

The members of this gang were all Jews, although Italians offered to help. Lansky feared that with Germany and Italy as allies, someone would warn the American Nazis.

“They were beating up kraut heads for a cause.” New York Mayor Fiorello LaGuardia responded by confining Nazi rallies. He insulted the Nazis by protecting German neighborhoods and visiting Nazi officials with Jewish police!

Benson tells this little known chapter of American Jewish history well and with passion. The prose is colorful and direct, even if informal to the point of crude. A reader could enjoy the words used to tell the story as much as the history itself! The text is objective in that Benson does not really try to defend anyone or any side.

The author’s sarcasm is funny such as “outside of being a thief and a homicidal maniac, Lepke [Buchalter] wasn’t a guy you’d figure to be a criminal.” “Among Lepke’s contributions to Western Civilization was his use of the word hit to mean a contract murder.”

The physical quality of the book is not the best and it has no annotation. It does have a bibliography.