Gangsters of Capitalism: Smedley Butler, the Marines, and the Making and Breaking of America's Empire (2021) 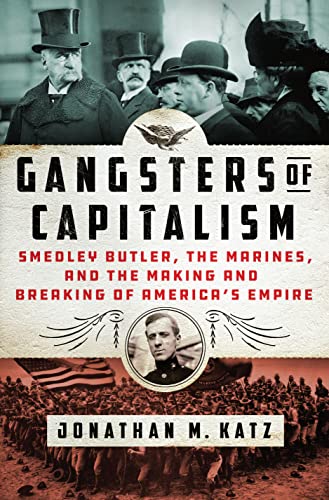 “I spent 33 years and 4 months in active service as a member of out country’s most agile military force—the Marine Corps. . . . And during that period I spent most of my time being a high-class muscle man for Big Business, for Wall Street and for the bankers. In short, I was a racketeer for capitalism.”

These are word of Smedley Butler, who in his 34-year career as a Marine rose to the rank of Major-General and earned 16 medals (five for valor), a Marine Corps Brevet Medal, and two Medals of Honor.

Jonathan Katz’s Gangsters of Capitalism follows Butler from his first days as a 16-year-old Marine recruit during the Spanish War of 1898 until the eve of World War II. It is a carefully researched and readable biography of a man who played a critical role in blocking an alleged coup d'état that foreshadowed the January 6th attack on the US Capitol.

In what became known as the “Business Plot,” Butler was approached by a businessman in 1933 who claimed that he represented a group of wealthy executives and 500,000 military veterans who wanted to overthrow President Franklin D. Roosevelt and establish a fascist state.

Under the alleged scheme, FDR would either be ousted from the government or sidelined with an appointee who would serve as the real power in the administration. Butler informed federal agents of the plan and, in ’34, testified before the Un-American Activities Congressional (HUAC) committee. His allegations were accepted as credible, noting that it has received evidence of “an attempt to establish a fascist organization in this country.” However, there was no follow up, and no one was prosecuted.

Most of Katz’s study reconstructs Butler’s three decades-plus years in the Marines, detailing how he participated—and eventually led—military campaigns to annex the Philippines and the land for the Panama Canal, twice led troops in China and invaded and occupied Nicaragua, Cuba, Puerto Rico, Mexico, and the Dominican Republic.

Katz offers considerable analyzes of Butler’s—and the Marines’—role in the occupation of Haiti. In 1915, two regiments of Marines landed in Haiti and the US installed a senator as head of state followed by a stage election. Butler assumed a critical, leadership role in Haitian life, effectively serving as the minister of interior. He oversaw the development of the postal service, telegraph system, a hospital and ever hundreds of miles of roads. He even established a forced-labor system resembling slavery. Most consequential, he supervised the training of the 3,000-man police force and served as its leader.

Butler later reflected, “When the National Assembly met, the Marines stood in the aisles with the bayonet until the men selected by the American Minister was made President.” He added, “I won’t say we put him in. The State Department might object. Anyway, he was put in.”

Butler’s most celebrated public appearance was at the “Bonus Army” rally in 1932. As the Great Depression set in, some 250 veterans from Portland, OR, traveled to Washington, DC, demanding that the federal government finally pay out the bonus that had been promised to those who had served overseas military during World War I. Before a crowd of thousands, he stood on a stage at the Anacostia Flats camp and declared:

“We are divided, in America, into two classes: The Tories on one side, a class of citizens who were raised to believe that the whole of this country was created for their sole benefit, and on the other side, the other 99 percent of us, the soldier class, the class from which all of you soldiers came. That class hasn’t any privileges except to die when the Tories tell them.”

The Bonus Army was remarkable because it was racially integrated at a time when Jim Crow laws were in full force.

The Bonus Army assembly was broken up when President Herbert Hoover ordered the US Army troops, led by Gen. Douglas MacArthur and assisted by Majors George Patton and Dwight Eisenhower, to end the occupation. The military assault resulted in three veterans killed, 54 injured, and 135 arrests.

Jonathan Katz’s biography of Smedley Butler is an important reminder of how modern America’s global imperialist role was established. Its shadow haunts us to this day.