Ganges: The Many Pasts of an Indian River 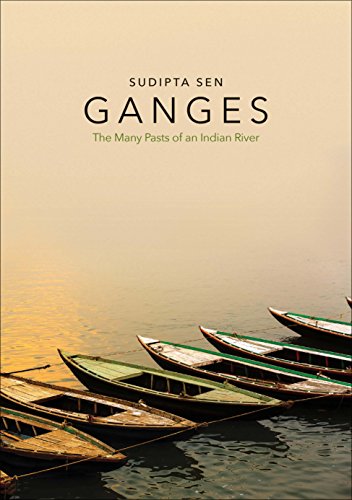 For the Hindus, Ganga is a river and a goddess indivisible from each other. All the great rivers in the world are revered but no river has been mythologized more than Ganga.”

Majestic rivers imbibe eminent civilizations: the Nile does the Egyptian, the Huang He the Chinese, and the Ganges the Indian civilization. Sudipta Sen, a professor of history at the University of California, Davis, has gathered outstanding materials to tell the geographical, historical, cultural, religious, and mythical stories of the Ganges—a 1500-mile long river, which emerges from the Himalayas’ Gangotri glacier, meanders through various northern and eastern states of India, flows by the sacred city of Banaras (Varanasi), streams through Bangladesh, and vanishes into the Bay of Bengal.

Ganges does not disclose any new information culled from any lost and found scrolls, papyruses, sketches, artifacts, or manuscripts. The book relies on various known but scattered sources to trace the many biographies of the river. It is a sort of meta-analysis that skillfully pulls together the bits and pieces of information, the macro and micro stories, from various disciplines to compose a more panoramic view of the Ganges, popularly known as Ganga in many languages of the sub-continent.

Professor Sen rightfully points out that Ganga is not just a Hindu river, even though its mythification in Hindu scriptures and rituals is most extensive and unique. Many creeds interact with Ganga. The Ganga tales portray miracles of the Buddha crossing a ferocious river both with and without boats. The sacred city-state of Vaishali founded on the banks of Ganga in 600 BCE, hosted the Buddha’s last sermon and claims to be the birthplace of Lord Mahavir, the originator of Jainism. Guru Nanak, the founder of Sikhism, bathed in Ganga to expand its blessings for the people of Punjab.

Islam’s relationship with Ganga is complicated. Unlike Hinduism, Buddhism, Jainism, and other native creeds, the iconoclastic Islam had little use for idols, myths, and superstitions. Early Muslim invaders and their progeny, recounts Professor Sen, razed to the ground “nearly a thousand temples” in sacred cities on the banks of Ganga.

The complicated relationship lingered in the Mughal empire. Akbar, the most tolerant Muslim emperor, capped an ancient well in Prayag (Allahabad) where Hindus had been for centuries committing suicide in the hope of escaping “the endless karmic cycle of life and death,” but the emperor saved the nearby sacred banyan tree in a newly built chamber for Hindu pilgrims. The Mughals also built the Taj Mahal, a lasting architectural monument celebrating the quintessential Indian romance.

In detailing inter-creed and inter-ethnic rivalries in the Ganga region and elsewhere, Professor Sen is evenhanded. The historical events he features in the book are derived from diverse religious, historical, and cultural sources. He quotes many Western authors, some writing at the time of colonialism, and alerts the audience that the author might be carrying an overt or implicit bias. Such caution is always sensible while incorporating any secondary sources.

For the Hindus, Ganga is a river and a goddess indivisible from each other. All the great rivers in the world are revered but no river has been mythologized more than Ganga. Bathing in Ganga liberates the soul as does dying in it reaffirming the Hindu notion of Moksha. Ganga bears no contradictions as breathing flesh of the living and blowing ashes of the dead intermingle with no nervousness. The waters of Ganga are always pure no matter how much filth is dropped into its arteries.

From time immemorial, the rational and the irrational freely fuse in the torrents of mighty Ganga as the great Hindu mathematicians and magicians seek bliss in its waters. Indian prime minister Nehru had requested in his will that his ashes be cast into Ganga. They were. India’s national anthem sung daily by millions evokes the “music of Ganga and Jumna.”

Professor Sen does not hesitate to see Ganga as the believers see it. At Prayag (Allahabad), a place of pilgrimages like Makkah, the “three” rivers meet and flow into each other. This Sangam summons the songs and sentiments of profound religiosity and romance. The mystery of the rivers intensifies because the two rivers, Ganga and Jumna, are real whereas the third river, Saraswati, though mentioned in the sacred scriptures, no longer exists anywhere in the subcontinent.  And yet for the devotees and lovers, Saraswati flows and dissolves into Ganga, the mother-river that welcomes the visible and the invisible offspring.

More recently, Ganga has spilled far beyond the comforting myths. The devotees and scientists are on the opposite banks of the river. Climate and ecology mistrust rituals and beliefs. Modernity points out that the river is loaded with pollution. Sadly, “the purest of all rivers has also become one of the most polluted in the world.” The mighty river is suffocating and dying.

In the closing chapter, Professor Sen laments how “tanneries, chemical plants, textile mills, distilleries, slaughterhouses, and hospitals discharge their” nonbiodegradable waste into Ganga. Furthermore, millions of gallons of raw sewage that the cities generate enter the river untreated. At many places, Ganga is poisonous, threatening public hygiene and disease.

The various government attempts to clean the river have failed. Ironically, a multitude of Indians does not agree with the problem of contamination because for them Ganga is in no “imminent danger” as its waters will always be pure and sacred. Others see “dirt” in a more philosophical sense and are skeptical of the idea of “sanitization.” In the mythic world, all criticisms of Ganga are misunderstandings, and the critical science rarely receives respect.

No one knows how Ganga will breathe in the future.

Professor Sen has written a massive book on Ganga. It is almost a reference book, written over many years as the complexity of details demonstrates. It is a scholarly tome that brings together historical materials related and unrelated to the river. Just as tributaries originating far away head toward the river, many microhistories that Ganges interweaves originate in “remote habitats” not only within the subcontinent but also elsewhere.

Very few readers will be able to digest the whole book that roams from place to place, mountain to ocean, custom to ritual, creed to creed, conflict to conflict, scriptures to scriptures, kings to kings, invasions to colonialism, mythology to science, geology to archeology, and from pre-Vedic times to post-modernism.

This Yale book is a sumptuous buffet and there is plenty for everyone to savor, munch, binge, and even take some home for family and friends.