Game Misconduct: Hockey's Toxic Culture and How to Fix It 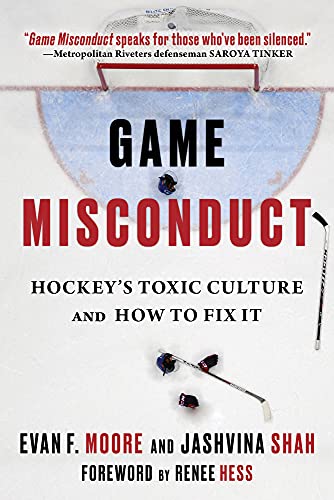 In the past few months, there has been a plethora of reports from all levels and categories of sports, revealing case after case of racism, sexism, sexual harassment, sexual violence, misogyny, homophobia, and bullying, hazing, and other forms of abuse. In Game Misconduct, Evan Moore and Jashvina Shah home in on these issues embedded in, what they term, “Hockey’s Toxic Culture.”

Moore and Shah, both hockey journalists, begin with an examination of hockey culture as an entry point for understanding the subjects broached in this book. They see it as a culture that exudes whiteness, demands rigid conformity, and is driven by hyper-masculinity. To a great extent, until quite recently, the appearance of a person of color on the ice in professional hockey was rare, and in amateur hockey, unusual. The same is true for women or any others who are not heterogeneous males. This sets a context for what follows.

It will come as no surprise that racism occupies the largest single subject of attention. Race is a factor at every level and in every facet of the game. Case after case of the most obvious and vicious incidents of racism are laid out in an unending parade. More important are the less obvious and subtle forms of racism, especially those cases where the perpetrators have no real grasp of what they doing. Included in this category are the institutional biases within hockey.

Nor does it come as a surprise that sexism, sexual assault, and domestic violence are subjects of another chapter. The hyper-masculinity in the hockey culture flows easily into the objectification of women, rape, and sexual harassment. The authors explore the view that women do not belong in the sport which, although fading, has not disappeared. The belittling of women as athletes and the devaluation of women’s hockey have been part of the landscape of North American sports for decades.

Sexism is embedded in the language of coaches, media reporters, commentators, and in locker room banter. High-profile cases from television commentary serve to highlight the problem. These issues also find expression in the treatment of women’s hockey, again individually and institutionally.

Some attention is also given to homophobia, transphobia, and ableism, and the failure of hockey at nearly every level to address these issues.

One of the strengths of this analysis by Moore and Shah is the considerable attention that it pays to the victims of these failings in the sport, and the consequences for both the victims and the sport. The case as presented is weakened by two tendencies in the narrative. First, there is an Oliver Stone relentlessness about the presentation. Case after case and a blizzard of examples strung out across the pages produces a numbness in the brain and diminish the shock to the system of the reader. Second, the narrative too often slips into only vaguely relevant examples, many outside of hockey. These diversions are too long and disrupt the flow of the argument.

The final chapter, “Why It Happens and How to Fix It,” is another strength of Game Misconduct and offers helpful advice to those in hockey at every level and in every capacity from the Commissioner of the National Hockey League down to players and parents in youth hockey, including the fans.

Some hockey fans will try to dismiss Evan Moore and Jashvina Shah as writers who are haters and are out to destroy hockey. They both deny this and claim a love for the sport, s claim that rings true throughout Game Misconduct. For all the exposure they give to the problems of hockey it is clear that what they want is reform, not destruction, of the sport they love.