The Game: Inside the Secret World of Major League Baseball's Power Brokers 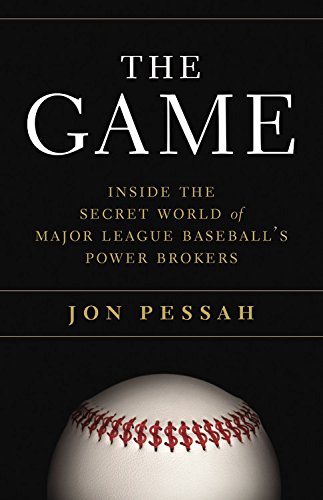 “through it all, Major League Baseball not only survives, it flourishes. There is no game like it.”

The Game: Inside the Secret World of Major League Baseball’s Power Brokers is a book by Pulitzer Prize nominee and a founding editor of ESPN the Magazine author Jon Pessah, who gives ardent baseball fans an insider’s view of Major League Baseball from a vantage point not unlike having a detailed peek behind the facades of a beloved amusement park ride.

Fans may enjoy the view from their own seats, but Pessah’s tome, written in narrative form, details the real story of “closed to the public” activities lurking behind the headlines of Major League Baseball during a critical time in the history of the game primarily stretching between 1992 and 2010. The book should appeal to all true fans who have a love of both the history of the game as well as the thump of a 98 mph fastball slamming into the soft leather of a catcher’s mitt.

Through hundreds of personal interviews and painstaking research, Pessah has made his book read like a great novel, and despite most fans reading the book already knowing the ending, it remains a compelling story. It focuses on three primary figures: Milwaukee Brewers owner and eventual Commissioner of Baseball Bud Selig, MLB player’s union leader Don Fehr, and Yankees owner George Steinbrenner.

Documenting the trio’s impact on the game, the three main characters continually crash together, separate, and then take additional runs at each other, each time with the stakes just a bit higher than the last and the future of the game becoming more and more in question.

The majority of the book is devoted to the many battles between Selig and Fehr and their animus toward each other often giving rise to a need for personal revenge for past lost conflicts perhaps even at the expense of the game itself. The pair’s encounters are not unlike those of U.S. Army General George S. Patton Jr. and British Field Marshall Bernard Montgomery during their time in the European Theatre during World War II. While their objective of winning the war was shared, how they went about it and how they viewed their own personal roles was quite different and miles apart. The same could be said about Fehr and Selig and their clashes over the years.

And throughout it all is the looming presence of Yankees owner George Steinbrenner. Pessah is unwavering in his portrayal of this driven and deeply flawed man whose nature was so complex that his relationships with all those around him still elicits emotions ranging from unforgiving resentment for the abuse and humiliation heaped upon them to unconditional love and respect for the man. Reading the depictions of the conversations, at all decibel levels, between “The Boss” and the recipient, are the best parts of the book.

The author also brilliantly shows the impact the game had and continues to have on American life, and how it maintains its prominent place in the cycle and fabric of our country’s summers. Pessah is adept at revealing the ebb and flow of fan despair, anger, and joy with the game through events like the September 11, attacks, and a cancelation of a World Series, along with the “wow” years of the monster home run bashings of Mark McGwire, Sammy Sosa, and Barry Bonds. There is also a great deal of attention devoted to the sudden and deflating realization that steroid use and cheating was the reason for the huge increase in the “long ball” years.

The book also contains some great sidelights as Pessah expertly weaves in other luminaries such as former Presidents George W. Bush, Bill Clinton, current Supreme Court Justice Sonia Sotomayor, and former Secretary of State Colin Powell, as they intersect the game at critical points throughout the time period.

And then there are the fans. After witnessing the actions of their perceived heroes and villains involved in their adored game, they may have at times thrown up their hands and walked away from it. But through it all, Major League Baseball not only survives, it flourishes. There is no game like it.