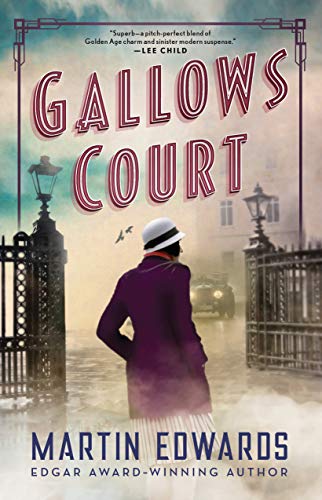 “Martin Edwards crafts vivid descriptions of both character and setting that embed the reader into the scene in a way few writers can achieve.”

Gallows Court is set in London during the 1930s, the Golden Age of detective fiction, but the author's elegant prose carries a glaze of stylish Victorian era ambiance with some atmospheric gothic noir thrown in.

Indeed. The characters in the story are mostly upper to upper middle class who seem to hover over but never quite, or rarely, touch—or maybe ignore—the bleak, sleazy, seedy reality of the times in which they live. This is early London, full of liars, cheaters, charlatans, mountebanks, artful dodgers, and other fast-talking rogues.

Meet Rachel Savernake, the mysterious, intriguing daughter of a renowned hanging judge. She's recently gained a reputation and some notoriety as an amateur detective by solving the Chorus Girl Murder, a case that has stumped Scotland Yard for some time.

Here she is preparing to step into her chauffeur driven Rolls Royce Phantom:

"Fog was slithering over the square, and cold January air nibbled her cheeks. She was glad of her sable coat. The lamp-lights tinged the dirty greyness with an eerie yellow hue. Long years spent on a small island had accustomed her to sea frets. She felt a strange affection for the winter mists drifting in from the water, rippling like gauze curtains, draping the damp landscape. A London particular was a different beast—sooty, sulphurous, and malign, as capable of choking you as a Limehouse ruffian. The greasy air made her eyes smart, and its acrid taste burned her throat. Yet the foul and muddy swirl troubled her no more than pitch darkness frightens a blind man . . ."

She is waylaid by a man emerging from the shadows. But she isn't afraid, she already knows who he is, just like she seems to know many things you wouldn't expect her to know. His name is Jacob Flint, an up and coming crime reporter hoping to attach himself to her coattails as she solves other crimes. Or at the very least, get a tip or a scoop on the unsolved murder of Mary-Jane Hayes whose headless remains were found in a sack.

Rachel puts him off knowing he won't give up. Which is her plan, but Jacob is too naïve to know he's being manipulated.

This particular night, Rachel is not on her way to a glamorous evening out as one might expect. She is on her way to pay a visit to Lawrence Pardoe, along with her chauffeur/bodyguard, to convince Pardoe to kill himself.

They encounter Pardoe as he is entering his front door carrying a box. Rachel helps him inside at the point of her gun, then orders him to:

"'. . . write a confession to murder. . . Don't worry about the phrasing. I shall dictate every word. . . . Once you blot your signature, we shall leave the room, and you will lock the door. Leave the key in the lock. In the bottom drawer of your desk . . . is a pistol loaded with one bullet. Place it to your temple, or inside your mouth. It will be a quick end . . .'"

Remember that box Pardoe carried in? It contains the head of Mary-Jane Hayes. This is a book of reckoning, retribution, and settling scores.

Jacob and Rachel encounter more murders before the book ends. Here's one that Jacob stumbles upon:

"He pushed open the door to his left, and shone his torch inside. The room was sparsely furnished with a small sofa, a single armchair, and a sideboard. Lying on the sofa was the body of a man. His frame was so bulky that his long legs hung over the end of the sofa, and touched the matting on the floor. Blood had spurted from a cruel wound in his stomach. Another ugly gash disfigured his neck.

"The trembling of his hand made his torch beam waver. It caught a woman's pointed red shoe, peeping out from behind the sofa. Swallowing hard, he forced himself to move forward a couple of paces, so that he could see the shoe's owner.

"The body sprawled on the threadbare carpet belonged to a young woman with vivid red hair. Her green silk blouse was ripped and blood-stained. Her white throat had been slashed."

There's atmosphere aplenty in this book, sinister undertones slither throughout. Even Rachel comes across as sinister, but in a posh upper-class way.

It takes a little while to get into the story, there's a lot going on that moves step by step, and readers never quite know who's telling the truth. It's not a simple plot, but stay with it for the payoff. Everything comes together in perfect accord.

Author Edwards says this book is different than his other books, and he approached the writing of it in a different way.

"I decided to take the risk of beginning the story without having a clue as to how it would end," he said. "I was deliberately setting out to write a novel very different from anything I'd produced before, set in 1930 and much more character-driven than my earlier work. It featured Rachel Savernake, an unorthodox female protagonist, and so it made sense to write it in a different way."

This is a book for readers who prefer to see bodies on the page. Murders, assaults, false and forced suicides, blood and dismemberment, corruption, depravity—it's all there. Martin Edwards crafts vivid descriptions of both character and setting that embed the reader into the scene in a way few writers can achieve.