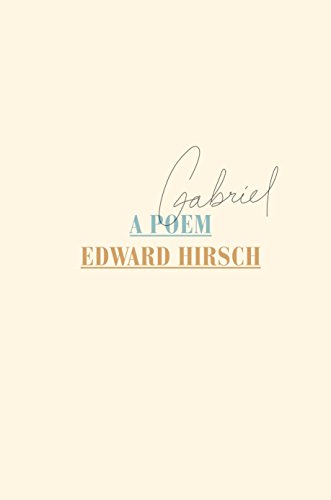 “. . . an unforgettable youth and a father’s loving grief.”

At rare times, writers and artists create beyond the box of genre and form. Often it is with wild experimentation drawn from the imagination, at other times it comes from the heart struggling to speak with full sincerity (Emily Dickinson should come to mind).

Edward Hirsch has achieved a breakthrough form in his portrait of his son Gabriel, who died a young man. This long poem sequence (3 line stanzas running to 78 pages) is a record of the highest order. His frequent reference to other writer-parents adds a depth and relevance, but it is his utter sincerity that raises this book to universality.

What emerges is Gabriel’s life story that includes the lives of those he touched, including his many therapists for his long list of “pervasive developmental disorders.”  Hirsch holds back nothing, and though he has been praised for his lack of sentimentality, his love and grief ring strong here.  The impossibility of this task is clear to Hirsch:

I’m scared of rounding him up

And turning him into a story

God of Scribbles and Erasures

I hope he shines through

I keep scraping the canvas

And painting him over again

But he keeps slipping away

Gabriel’s youth in Brooklyn and his adolescence in Amherst are presented with all the reckless unreason of his youth.  “For an after-school ritual he rushed around/ The house turning over furniture/ And throwing books at the wall./ / He pushed over a lamp and tossed pillows/ Through the door he nearly broke down/ He kicked out the window twice.”

The author opens with his looking down at his son’s body in the coffin of the funeral home. “He had always been a restive sleeper/ Now he was weirdly still/ My reckless boy// Dressed up for a special occasion/ He liked that navy-blue suit/ And preened over himself in the mirror.” Progressively Hirsch reveals the beauty of his spirit as well as how he and his wife Janet and many therapists struggled to care for him without crushing his zeal for life. Ultimately he laments his lost son, “Who left the house one rainy night/ And never returned/ Lost boy// Who will never be found again/ Anywhere but eternity/ Uncontrollable fiery youth.”

One cannot capture in a short review what it took the author 78 pages to do. And so the best recommendation is to find this book and read it through some afternoon when you have the time to get to know an unforgettable youth and a father’s loving grief.