G-Man: J. Edgar Hoover and the Making of the American Century 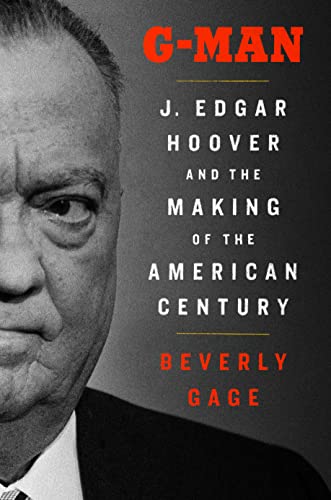 “Beverly Gage’s nearly 800-page biography of J. Edgar Hoover . . . is exhaustively researched and filled with fascinating facts and details of Hoover’s life and career (both personal and political) . . .”

Beverly Gage’s nearly 800-page biography of J. Edgar Hoover, who headed the FBI from 1924 to 1972, is exhaustively researched and filled with fascinating facts and details of Hoover’s life and career (both personal and political), but it is marred by a progressive world view that inevitably shapes her judgments and assessments of the man and his overall impact on American life in the 20th century.

Gage, a professor of history at Yale, to her credit, does not let her progressive ideology stand in the way of facts, but in the end the facts don’t matter to her view of Hoover and conservatives in general. Instead, what matters is not that anarchists and communists in 1919 posed a real threat to government officials and citizens in several American cities, but that Hoover helped organize and carry out the “Palmer raids” in what she and others call the “first Red Scare.” Or, what matters is not the nature and extent of communist infiltration of the Roosevelt and Truman administrations in the 1940s—which she acknowledges—but that Hoover’s anti-communism led to the rise of “McCarthyism,” or the “second Red Scare.”

This is a pattern that continues throughout Gage’s book. She even occasionally gives Hoover credit, for example, for opposing the mass removal and detention of Japanese Americans and aliens during World War II, but she attributes Hoover’s opposition to FDR’s infamous Executive Order to concern over the FBI’s and his own reputation instead of any concern he might have had for the violation of individual rights involved. Indeed, Gage shows that it was Franklin Roosevelt who vastly expanded the authority and power of the FBI into areas that Hoover had shied away from, such as warrantless wiretaps and widespread surveillance of perceived enemy aliens during World War II.

Hoover’s opposition to, and use of the FBI COINTELPRO operation to target and disrupt, radical black groups such as the Nation of Islam and the Black Panthers in the 1960s and early 1970s, Gage writes, resulted not from his commitment to “law and order” (a phrase which Gage usually places in quotes throughout the book) but from his innate racism that was a product of his upbringing and schooling. And Gage even assigns blame for creating the political and racial atmosphere that led to the murder of Martin Luther King, Jr, to Hoover.

To be sure, Hoover was a product of his times, and no one would describe his racial views as enlightened. But then, no one would describe Lyndon Johnson’s racial views as enlightened, either, and it was Johnson and his cohort of southern Democrats in Congress, not Hoover and conservative Republicans, whose opposition to proposed civil rights legislation and anti-lynching bills in the 1940s and 1950s enabled Jim Crow laws and racial terror to continue in the deep South.

Gage exhibits the typical progressive view of McCarthyism, despite acknowledging that Hoover and others (including, by the way, McCarthy) probably understated the extent of communist infiltration of the U.S. government in the 1940s. Soviet agents conducted espionage and acted as agents of influence at very high levels in the State Department, the Office of Strategic Services (OSS), the War Department, the Treasury Department, and the White House before, during, and after World War II. What Gage and others call the Red Scare was real and damaging to U.S. interests around the world.

At times, Gage seems to take an almost sentimental view of Communist Party USA members who sought “racial justice,” fought for workers against the greedy capitalist corporations, and had a liberal “social vision.” She criticizes Hoover for his “reactionary” view which saw “communism as a challenge to the racial, religious, and social principles he held most dear.” We now know, and Gage doesn’t dispute, that the American Communist Party was then financially beholden and ideologically aligned to Stalin’s Soviet Union. Hoover’s work against domestic communism should be lauded, not condemned.

Hoover, as Gage acknowledges, professionalized the FBI, turning it into one of the most respected law enforcement agencies in the world. He also actively promoted the FBI’s work and sought to protect its reputation against its many detractors. He curried favor with friendly journalists and politicians, including the eight presidents he served. Gage shows that Hoover was more comfortable when Republicans held the White House—Eisenhower and Nixon were probably his two favorites, though he got along well with both FDR and LBJ.

Gage spends an inordinate amount of ink on Hoover’s relationship with Clyde Tolson, whom she depicts as Hoover’s life partner. It seems quite clear that they were a couple, and Gage, as have others, notes the hypocrisy of Hoover’s professed conservative religious moralism in light of his relationship with Tolson. Hoover in his last will and testament left almost everything he owned to Tolson.

In the book’s epilogue, Gage drops any pretense of objectivity. Hoover, she writes, was a “racist and a demogogue, a single-minded seeker of power, a small-minded and twisted man intolerant of even his own desires.” He contained and crippled “movements seeking racial and social justice,” and thereby limited “the forms of democracy and governance that might have been possible.” But Hoover, Gage writes, is not solely to blame. It is conservatives and their “reactionary politics” and the “abuses they inspire” that share in Hoover’s blame.

How ironic, though unmentioned by Gage, that today it is the progressive Left that sings the praises of Hoover’s FBI as it investigates former President Donald Trump and many of his supporters, while many conservatives in the wake of the Russia-collusion hoax contend that the FBI has become too politicized. But then, today’s FBI is not Hoover’s FBI.