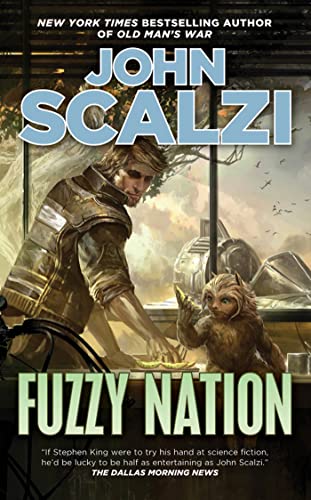 Fuzzy Nation is the story of a prospector, Jack Holloway, who, while searching for minerals on the planet Zarathustra hits the jackpot with a seam of “sun stones” worth a fortune. Holloway is the type of man who is always at odds with authority and this find brings him and the powerful Zarathustra Corporation nose to nose; however, even as Holloway struggles to retain control of his interest in the find, his future—and everyone else’s on the planet—is thrown into uncertainty by his next find: a small furry animal he calls a “fuzzy,” which seems unusually clever, and whose family comes to live in his home. The problem is that by Colonial Law, if the fuzzies are not just clever but actually “sapient,” then all mining must stop on Zarathustra, Holloway won’t get rich, and the Corporation and its tens of thousands of employees will be booted off-world.

The plot is absolutely predictable from very early in the book, but if you still don’t want spoilers, don’t read Little Fuzzy first.

Mr. Scalzi delivers this simple, no frills, no surprises story with a rather ponderous, old-fashioned style and humor that fans of Harry Harrison will probably enjoy enormously. Indeed, Mr. Scalzi’s books all have a somewhat old, slow, quaint delivery that really does take the reader back to the Golden Age of sci-fi (or, at least, the Silver Age). The style of his “Old Man’s War” series has been compared to that of Heinlein—which is not a comparison anyone should be ashamed of—and it may well be this steady, exposition-heavy delivery that has made him so very popular.

Many modern sci-fi readers hanker for a time 40, 50, or more years ago when future technology was understandable and writers weren’t manically whirling readers around cyberspace, baffling them with genetics, and shoving them through the Singularity. These readers are Mr. Scalzi’s natural audience and, given that, perhaps it is no surprise that we find him retelling a 50-year-old story, or that the language, the technologies, and the ideas in the book have hardly changed at all from the original. As Mr. Scalzi says, he is offering readers the equivalent of “a cover of a song they like.”

While H. Beam Piper fans are already bristling with indignation that anyone should think Little Fuzzy needs retelling, the bigger questions might be: Why retell an old story in an old idiom? Wouldn’t the re-imagining of Little Fuzzy have been more interesting if it had been done by Charlie Stross or William Gibson? And why do it at all for a sci-fi book? If science fiction is “the literature of ideas” as many fans believe, why reboot sci-fi stories at all if you are not going to add something wholly new and original?

Little Fuzzy was the Avatar of its generation: a tale of a big bad mining company exploiting a planet at the expense of its indigenous sapients. As such, it had points to make about the rights of indigenous peoples, the exploitation of non-renewable resources, and about the nature of sapience. It was a solid contribution to “the literature of ideas” in the best traditions of science fiction. It is very hard to see what Mr. Scalzi has added by updating the story.

If you only read a few sci-fi books a year, it is probably not worth making room for Fuzzy Nation. There are many more interesting books being published. If you are an H. Beam Piper fan, you will either be dismayed or excited by this reboot. Mr. Scalzi is a good writer and tells a good tale. He may well be going to take the Fuzzy Universe in fun new directions, much like the recent reboot of the Star Trek films, which added nothing significant but gave fans the possibility of more of their favorite “world” yet to come. If you are already a John Scalzi fan, you will almost certainly enjoy it.