The Future of Black: Afrofuturism, Black Comics, and Superhero Poetry 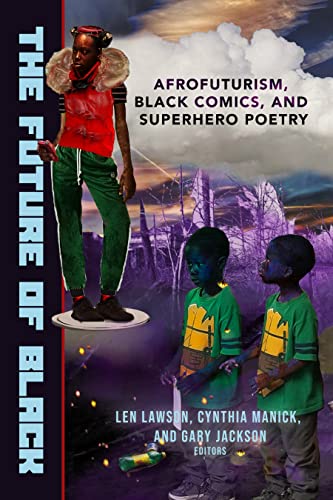 What do you do when the world refuses to look at you, to really see you? When, still, your life is expendable if the smallest excuse for taking it can be conjured?

You create your own fresh new mythology, that’s what. You find a new way of talking to powers larger than you. You claim and gather your histories, those nobody seems to be claiming. You say your prayers in the form of superhero tales.

That’s what a new anthology of black poetics should do if it is to be relevant to the conversations about race that we are having today. That’s what The Future of Black: Afrofuturism, Black Comics, and Superhero Poetry, edited by Len Lawson, Cynthia Manick, and Gary Jackson, does. Gather. Claim. Name every tale, every take laser beamed, first, toward clarity, and then toward a broad, optimistic identity, the (perfectly good) present one constantly under attack, the (fantastic) real one needing unearthing daily if there is to be hope for what comes next.

As co-editor Len Lawson says, “At its nucleus, the Black imagination has always been futuristic because it yearns for its roots in Africa, the place that birthed it, where communion with the supernatural originated in tribal culture—I had a vision to track that pilgrimage with Afrofuturism and poetry back to those places I left behind as a kid in front of the TV, in the classroom, at the library, or just trying to embody whiteness when I never should have.”

Yes, Afrofuturism in pop culture, in folklore, in contemporary history and in its poetics is also, like most great superhero literature, very much about identity.

Take these lines from “final note to Clark,” an example of Lucille Clifton’s many fantastic protest poems about (against?) Superman:

“they had it wrong,

you are only clark kent

why did I think you could fix it?

how you must have wondered

to see me taking chances,

dancing on the edge of words,

Pointing out the bad guys,

could see the beauty in me.”

You see it, right? Not a capital letter in sight. ’cause he doesn’t deserve it. He’s not that great. What kind of a superhero is he that he can’t see what happens every day in his face? (What kind of superheroes are we?) You hear it, right? The “oh” of Clifton’s disappointment, of letdown, and, boy, have you let me down. But who? Clark? Us? Maybe it’s normal for people forever oppressed to wonder why nobody comes to the rescue? Why everybody seems so intent in constantly looking the other way.

This book is full of the forms of that heartbreaking question. With it, it aims to warm up the conversation about all that Black America has contributed, and continues to contribute, to the whole of us, hoping to get a different answer if it goes at it cleverly enough.

Sometimes its take is humorous (because, hey, what can you do if you don’t want to live life angry?). Sometimes lyrical, musical. Others it’s a debate set on a stage, like a play:

“In a parallel world were all Dr. Who’s

Are black, I am the doctor who knows no god

Is more powerful than Time. In a parallel world

Where all the doctors who are black see cops

The doctor who blacks out whenever he sees

That’s from “American Sonnet for My Past and Future Assassin” by Terrance Hayes, about the flawed superheroes all around us. Even when they look like us, perfect they are not, and often, they are just as afraid. Who can a Black man depend on? Not his superheroes, Hayes seems to be saying.

But The Future of Black: Afrofuturism, Black Comics, and Superhero Poetry is not only concerned with the dynamics of identity, Black erasure, racism, otherism, and the need for a Black universe of marvelous archetypes. It’s also concerned with language, imagery, and music, including new voices making poetry in visual ways, with letters and words as etchings on a page. With graphic comic representations of tough-to-hear tropes, but also with some straightforward verse and the inclusion of Black poets across ethnicities, as in these few lines from “How to Become Your Own Superhero” by Tony Medina:

I know that there is more to life

than what we all can see.

I hold onto invisible threads

of what mama and grandma passed down:

golden and silver cords of hope, courage and faith.”

Is it a fun book? Absolutely. But it needed to be if it was going to achieve the goal of Afrofuturism as discipline: to appraise and reframe the past and future of Black life in order create a better, more hopeful world (and better living conditions) for contemporary Black people via technology, art, music, and literature. It had to be if it was going to go beyond hope, to further cement a positive identity of Blackness, if it was going to be part of the solution so many are still holding on for.