Furious Love: Elizabeth Taylor, Richard Burton, and the Marriage of the Century 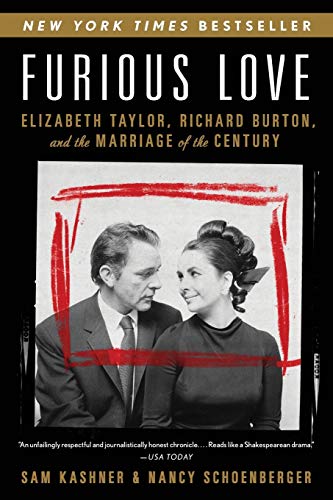 Pity the young. Not only is their youth wasted on them, but they do not remember when Elizabeth Taylor and Richard Burton were lost in the throes of their all-consuming passion while the world looked on, leering.

Thankfully, this book will help fill in the gaps for those born too late, just as it will remind the rest of us of the time in which the paparazzi were only just learning to hone their telephoto craft with the now-legendary picture of the married (to Eddie Fisher—another scandal, which had just died down) Elizabeth Taylor, lying on her back, her knees upraised, her black hair cascading around her, dallying with the married (to the long-suffering Sybil Burton) Richard Burton who lies prone next to and above her.

The photo captures the moment before the kiss. They stare into each other’s eyes, unaware of the camera’s lens. The pair is sun-drenched, their bodies entwined on the deck of a yacht anchored off the coast of Italy. Indeed, most of the action in the pages of Furious Love takes place on yachts, in luxury hotels, and on movie sets. It is just that sort of book.

As Elizabeth Taylor later recalled, “. . . from those first moments in Rome we were always madly and powerfully in love . . .” And, as authors Kashner and Schoenberger suggest, in remembering their liaison, we must remember to give equal emphasis to each of her two adverbs.

For those joining us late (born since 1970), Elizabeth Taylor was once wed to film producer Mike Todd, whose close friend was singer Eddie Fisher, who was himself married to actress and America’s Sweetheart, Debbie Reynolds. They were a happy foursome and close friends, until Todd was tragically killed in an airplane crash in 1958. After his death, Fisher went to comfort Taylor, only to fall in love with her and to abandon Debbie Reynolds and his two children, Todd and Carrie, to run away with her.

But where such an infidelity had only recently cost Ingrid Bergman her career and driven her from not just Hollywood, but the whole of the United States, the scandal only seemed to heighten Elizabeth Taylor’s fame, and she was offered the lead role in Cleopatra for a then-record sum of one million dollars. She traveled off to Rome to film her role, met her costar, a then little known Welsh actor named Richard Burton, who had the reputation of bedding his leading ladies, causing his wife Sybil no small distress. And yet, he promised her time and again that he would never leave her and that his romances were meaningless flings. That is, until he met Elizabeth Taylor.

Which brings us back to the deck of that yacht and the events that would soon be known as Le Scandale. As Taylor remembered it, she knew well enough of Burton’s reputation before working with him. She summed it up, saying, “I did not want to be another notch on his belt.” And so she did not. She became instead his wife—Sybil Burton and Eddie Fisher were cast aside along the way, as were various movie studios, directors, photographers, lovers, and multitudinous empty bottles of booze—his muse, his teacher in the art of film acting and of manipulating the media, his tempter, his tormentor, ultimately his ex-wife, and then his wife again, and then again his ex-wife, but always and most assuredly, the love of his life.

Furious Love offers us much in the way of proof of this, and not in just his gifts of diamonds, furs, houses, or in the opulent parties, or even in the blending of his children and her children into their children and their family, but best and most touchingly in Burton’s own words in his many letters to Taylor (which she has herself saved all these years and made available to the authors) and in his journals.

In a letter to a sleeping Elizabeth Taylor, who he did not wish to disturb, he wrote, “One of these days I will wake up—which I think I have done already—and realize to myself that I really do love. I find it difficult to allow my whole life to rest on the existence of another creature. I find it equally difficult, because of my innate arrogance, to believe in the idea of love. There is not such thing, I say to myself. There is lust, of course, and usage, and jealousy, and desire and spent powers, but no such thing as the idiocy of love. Who invented that concept?”

And yet he loved. He loved her, her children, and her pet dogs who were somehow—given all the servants around them—never housebroken or taken outside in time to avoid accidents on some of the world’s most expensive carpets. He loved her even when he realized, some years later, their basic incompatibility and wrote, “the fundamental and most vicious, swinish, murderous, and unchangeable fact is that we totally misunderstand each other . . . we operate on alien wavelengths. You are as distant as Venus—planet, I mean—and I am tone-deaf to the music of the spheres.”

Theirs was, perhaps, the first love as commodity. As Elizabeth Taylor and Richard Burton morphed in the public’s mind into “Liz & Dick,” their earnings, in today’s dollars, reached more than 350 million dollars a year, an amount greater than the total economies of several third world nations. But from such heights of fame and fortune, their ultimate trajectory was downward. The public tired of the Burtons and their films, their fights and their furious love. By the mid-1970s, they were appearing in TV movies like Divorce His, Divorce Hers and guest starring on Here’s Lucy (their lowest point, according to Burton, who despised Lucille Ball).

Ultimately they divorced, found other mates, and then found each other once more. They remarried (as a clearly disenchanted Ellen Goodman wrote in the Boston Globe, “Sturm has remarried Drang and all is right with the world. . . .”), divorced again and went their separate ways, each to new marriages, and Burton ultimately to an early death.

Furious Love not only rehashes the story of Liz & Dick, but places it—vividly, colorfully—in the mind’s eye as the pages fly by, recreating not just the story of lovers as doomed as any that Shakespeare created, but also an era now gone, but—for those of us lucky enough to have to have been born at the right time—most certainly not forgotten.