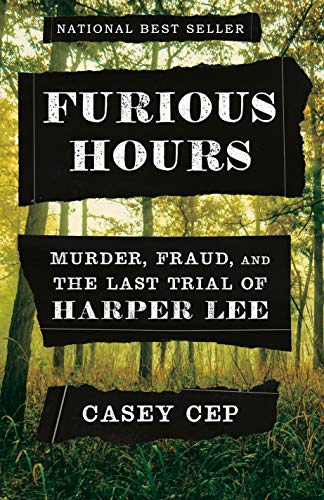 “Had Harper Lee completed The Reverend, would it have become the unparalleled great American true crime book? We’ll never know. But this we do know: Furious Hours is a true gem and its author, Casey Cep, is the real McCoy.”

For book lovers, there is a thrill to discovering a great story populated by intriguing characters and unexpected dramatic twists. The thrill is compounded when that story fronts for a fascinating backstory that might even outshine the primary tale. And when the stars align perfectly, both stories are told by a fresh, authentic voice. In Furious Hours: Murder, Fraud, and the Last Trial of Harper Lee, author Casey Cep has hit the trifecta.

The story brings us the saga of Reverend Willie Maxwell in the early 1970s, an apparent serial murderer motivated by insurance fraud, and his attorney, Tom Radney, a progressive in the deeply conservative state of Alabama. You couldn’t find a more unlikely pairing, but it makes perfect sense when you learn that Radney is motivated by a sincere belief that everyone deserves representation, no matter how unsavory their conduct.

And make no mistake about it, Reverend Willie added new depth to the term “unsavory.” His scheme involved procuring life insurance policies on the lives of relatives, friends, and neighbors, typically without their knowledge, and then making claims for benefits under those policies upon the insureds’ deaths.

What amplified the unsavoriness, though, were the bizarrely convenient (at least for Reverend Willie) deaths of the insureds, who met their respective demises under suspicious, but unprovable, circumstances.

Among the dearly departed were five relatives of Reverend Willie, including two wives, a brother, a nephew, and an adopted daughter, several of whom died in remarkably similar ways. But thanks to lawyer Radney, the lucky beneficiary escaped any criminal convictions while claiming tens of thousands of dollars in insurance proceeds. The death of Reverend Willie’s second wife Dorcas, a neighbor whom the reverend married after her possibly perjured testimony helped acquit him of the murder of his first wife, epitomized the pattern.

After Dorcas’s husband died, she and Reverend Willie got hitched. “[A] lot of people were convinced that he had used voodoo to fix the jury, put death on his neighbor’s trail, and charm a younger woman.” Alas, their marriage was short-lived, as Dorcas mysteriously died less than a year later. Following her death, her new husband claimed a “small fortune” in insurance proceeds from multiple policies he had purchased without her knowledge.

But Reverend Willie’s personal story came to its own abrupt end. Following the suspicious death of his adopted daughter Shirley Ann, upon whom he had also obtained insurance coverage, one of those aforementioned dramatic twists occurred at her funeral: “Before anyone in the chapel could react, a man in a green suit pulled a pistol from inside his pocket and fired three rounds into the Reverend Maxwell’s head.”

That man in the green suit was Robert Burns, a war hero and kin to Shirley Ann. Then, just in case a reader might have doubts whether attorney Tom Radney was a complex enough character to carry the story from there, he undertook to represent Burns, the man who put three fatal bullets into his client, because, with the death of Willie Maxwell, “the best lawyer in town needed a new client.”

And there you have it: a great story populated by intriguing characters and unexpected dramatic twists—but there’s more. There’s that fascinating backstory. And what more fascinating character for a backstory can there be than the enigmatic Harper Lee, author of To Kill a Mockingbird, who had been paralyzed in her writing efforts since the success of her debut novel?

Cep writes that “although people joked that Harper & Row would have published Lee’s grocery list, she didn’t want anything appearing under her name that wasn’t as good as what she’d written before.” So what better choice than to return home to Alabama and back into the courtroom, to write the true story of the life and death of Reverend Willie Maxwell, to be named The Reverend? How could it miss?

But Lee remained as paralyzed in this post-Mockingbird effort as she had been in others. She wrote Gregory Peck: “I refuse to let this thing go until it approaches some standard of excellence.” While most of us can understand striving for perfection, replicating it brings its own peculiar hell. At one point she toyed with the notion of novelizing the story, but even that tack stalled, and she ultimately abandoned the project.

As a result of Lee’s self-imposed quest for excellence, after Mockingbird, “[t]he entirety of her literary assets, including whatever else exists of The Reverend, remains unpublished and unknown.” The author concludes: “In a strange symmetry of author and subject, Lee and her book became the object of as much ‘rumor, fantasy, dreams, conjecture, and outright lies’ as Maxwell had once been.”