The Furies: A Thriller (20) (Charlie Parker) 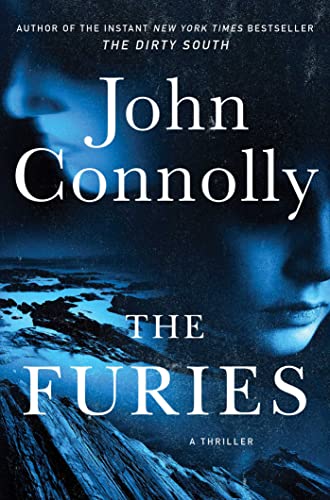 “The story of the story—the remarkable production and author-reader loyalty during a global pandemic—makes the book a must-have for Connolly readers and fans of New England paranormal twists.”

The cover of The Furies announces a thriller—and the title page presents “Two Charlie Parker Novels.” To find the reality of this pair of short novels, turn to the Acknowledgments: John Connolly wrote The Furies out in public, five days a week, as the Covid pandemic gripped the lives of his readers. Starting with a notion of vengeance and a pair of sisters (it’s called The Sisters Strange, and for Connolly, “strange” is a keyword for dark and dangerous), this writer of the macabre and historically haunted added a mystic rune. And then, like a gambler dealt a hand she can’t discard, Connolly resolutely attached one short chapter after another in devotion to entertaining and distracting his readers.

The author explains: Whatever plot items he’d quickly inserted on one day (and these chapters circulated in five languages!), he had to live with and build from. No going back for changes, when each chapter launched as soon as it had been written. Fortunately, this is Connolly’s 22nd Charlie Parker novel or novella, so in that sense, the deepest groundwork already existed.

Focused on the classic Parker locale of Portland, Maine, The Sisters Strange offers a returned-to-town criminal, the sisters he’s romanced, and a hoard of valuable old coins that at one point all belonged to a single aging collector. The menace and evil of that collector, named Kepler, should have prevented anyone from stealing his goods. But some thieves don’t know what’s good for them.

Parker gets called into the hunt for the thieves: A man he likes and respects is in love with one of those sisters and can’t bear to see her threatened. Seeing women as victims needing rescue, Charlie Parker is as likely as anyone else to fall for the call.

By the time the strands are painfully untwisted, Parker’s recognition of who’s masterminding both the crimes and the brutality is running a bit too late to prevent damage.

The second novella in this package, The Furies, invites Charlie Parker to rescue another damsel in distress. He’s overloaded; he tells his buddy Dave, the local bar owner, to tell the woman to leave a number and he’ll get back to her.

“’I heard a woman’s voice in the background.’ Dave spoke again, repeating what had been said. ‘She asked me to tell you that it’s urgent,’ he said. ‘Also, she says her name is Sarah Abelli, but she used to be Sarah Sawyer. She’s Nate Sawyer’s widow.’”

When Dave asks Parker about that name, Nate Sawyer, Parker warns him away from the Mob connection. But for the sake of both Dave and that mythical woman in distress, Charlie Parker will take the case.

This time, as in many other Connolly tales, there’s a dead child involved, and perhaps a ghost, not a very nice one. That should be an opening for Charlie Parker’s dead daughter, who haunts him, to make an appearance. But she doesn’t. And although Parker’s fascinating and complex friends Angel and Louis, well known to series readers, do appear, they’re not essential and they don’t reveal more about themselves—niggling disappointments for those who always hope for more from these “familiar faces.”

Neither novella on its own would compel re-reading: Go once through and head toward a deeper Connolly novel in other covers. But the story of the story—the remarkable production and author-reader loyalty during a global pandemic—makes the book a must-have for Connolly readers and fans of New England paranormal twists.