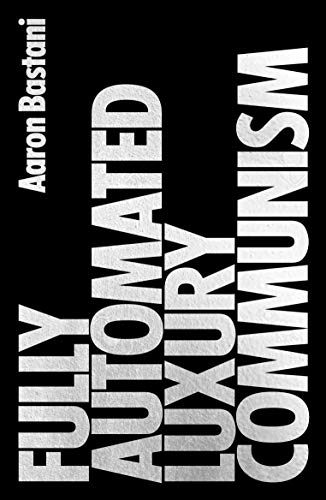 “Fully Automated Luxury Communism is an accessible, intelligent, and profoundly optimistic text with the potential to spark a revolution.”

Imagining the future has rarely been more urgent or more difficult. Climate change, inequality, aging populations, depleted resources, and animal rights all loom unimaginably huge before humanity. The 21st century has, perhaps unsurprisingly, been marked by a fascination with dystopias. In the face of such obstacles, what could lie before us but failure and doom?

Aaron Bastani suggests everything. Our failure to imagine a non-dystopian future is not a sign of dystopia’s inevitability, but of the monolithic power of capitalist realism: “The claim that capitalism will end is, for capitalist realism, like saying a triangle doesn’t have three sides or that the law of gravity no longer applies while an apple falls from a tree. Rather than understanding the present as one historical period among many . . . to be alive at the end of history means presuming our social systems to be unchanging as the physical laws that govern the universe.

“And yet the truth is that capitalist realism is already coming apart. The fact you are reading these words at all is proof.”

Bastani’s discussion of Communism as a potential future is thoughtfully framed in historic, political, and economical terms. He argues that industrial Communism was doomed to fail, but because technologies were not yet sufficient, not because Communism itself is unsustainable. Yet Bastani is also upfront about the failures of authoritarian communism, which never truly enacted Marx’s ideas.

Why should Communism succeed in the 21st century if it failed in the 20th? Because we have the technology. This is the heart of Bastani’s manifesto, which is as thorough as Marx and Engels’ 1848 oeuvre but engaging and perhaps more urgent. The shift from an industrial economy to an information-driven one has so completely shifted the logic of economics and production that the logic of capitalism simply no longer applies. The dystopian disorientation under which we presently operate is the flat, anxious “cultural logic of late capitalism” (cf. Frederic Jamison, 1991).

Bastani focuses not on the present, but on the near future. Our new logic is, or will be, one of “post-scarcity”: “‘extreme supply,’ something not only limited to information, but—as a consequence of digitization—labour, too. Here, continuous improvements in processor power, in combination with a range of other technologies, means machines will be capable of replicating ever more of what was, until now, uniquely human work.”

The legitimacy of this claim, that technological innovation can save us, may seem questionable, but Bastani supports it systematically. He articulates post-scarcity scenarios for labor, energy, resources, health, and food (without animal exploitation). And he knows his stuff. Bastani is a founder and senior editor at Novare Media, a regular commentator for the most engaged periodicals of our age, and he holds a PhD from the university of London. He writes with a scholar’s awareness and a populist’s ability to translate esoteric concepts for a mass audience.

The core concepts of Bastani’s argument are contained within his title. Fully Automated Luxury Communism speaks of a world in which nearly all labor is mechanized, and work as a requirement for economic survival is absurd. This is already a widespread idea: that, at a minimum, work-for-wages cannot be used to sustain the population, since there simply isn’t enough work to go around. Politicians’ scramble to provide work at any price leads them to profound moral compromise, in part because capitalist realism refuses to acknowledge that work is no longer the core foundation of economic production.

“Luxury” is key. Industrial Communism operated in conditions of scarcity: insufficient food, insufficient goods, insufficient access to ideas and freedom. But if scarcity is truly coming to an end, then luxury is next. The future is one in which we all have our needs met, and something more: comfort, joy, and enjoyment, all that is needed for life, liberty, and the pursuit of happiness.

Communism, fully automated and luxurious (FALC), has the potential to be our future. Youth activism increasingly moves in this direction. Politicians around the world discuss universal basic income (UBI). (Bastani rejects UBI as a perpetuation of capitalism. He proposes instead Universal Basic Services, intended to meet citizens’ needs without a market model.) Capitalism’s creation of profound inequality is increasingly recognized as something which cannot stand.

Yet FALC is not inevitable. It requires political engagement, popular action, and a will to change. Bastani does not propose a specific agenda, but he gestures back to Marx and forward to the innovations that may yet save us. Fully Automated Luxury Communism is an accessible, intelligent, and profoundly optimistic text with the potential to spark a revolution.