Full Service: My Adventures in Hollywood and the Secret Sex Lives of the Stars 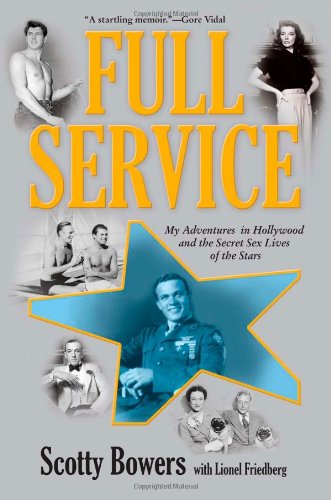 “Whether or not the tales told here are true, we will likely never know. What is sure is that despite a certain prurient curiosity that the book supplies, these are stories that we never needed to know about—true or not. After reading Full Service, no one will ever again be able to look at Charles Laughton in The Hunchback of Notre Dame in quite the same way.”

In the realm of literary criticism, we have a term for a memoir in which an 86-year-old gentleman looks back at Hollywood in the 1940s and ’50s—a period in which he became known as “Mr. Sex” and tricked with and/or arranged sexual hijinks for no less than Spencer Tracy, Mae West, Edith Piaf, Vincent Price, Tyrone Power, Katharine Hepburn, George Cukor, Noel Coward, Cecil Beaton, Clifton Webb, Raymond Burr, Vivien Leigh, the Duke and Duchess of Windsor, Desi Arnaz, Randolph Scott and Cary Grant, to name only a few.

That term, of course, is fiction.

And yet, no less than Gore Vidal insists:

“I have known Scotty Bowers for the better part of a century. His startling memoir includes great figures like Spencer Tracy and Katharine Hepburn. Scotty doesn’t lie—the stars sometimes do—and he knows everybody.”

So what shall we make of Full Service: My Adventures in Hollywood and the Secret Sex Lives of the Stars, the provocative , bizarrely fascinating, down and dirty page-turner of a memoir written by Scotty Bowers? And how shall we file it in our libraries and bookstores? And however can we cleanse our souls after reading it?

To read the book is to grow ever more mystified as the sexual anecdotes are woodenly, even hypnotically written. Everything seems so matter-of-fact: from the author’s first tryst with a Hollywood star and onward.

It begins simply enough, with Mr. Bowers in his starchy new Richfield gas station uniform walking up to a car that has just pulled up to the pump:

“The man behind the wheel smiled, looked me up and down, and said, ‘Yes, I’m quite sure you can.’

“It was the voice that Instantly gave him away. My God, I realized, this guy’s none other than Walter Pidgeon, the renowned movie star. I remembered him from films like How Green Was My Valley, Mrs. Miniver, and Madame Curie. That distinctive deep, smooth, very intelligent-sounding voice was instantly recognizable. I thought it best to pretend that I didn’t know who he was, so I bumbled a response.

“I pumped the amount of gas that he requested and when I came back to the driver’s window Pidgeon had his hand on the sill. He was holding a few dollars for the gas between his thumb and forefinger and squeezed between his middle and index fingers was another crisp bill. I couldn’t make out how much it was but I stopped when I saw it. His gaze remained locked on me.

“’What are you doing the rest of the day?’ he asked in a very friendly tone, his face remaining expressionless.

“Well, it wasn’t too hard to guess what he wanted. I got the message immediately.

“I took the money, thanked him, then went to tell Russ that I was leaving.”

And from that, Bowers takes to the life of a sex worker like an old pro, which, it turns out he is. In later chapters dealing with his childhood, the author reveals that as a young man in Depression era Chicago, he serviced nearly every priest and out-of-town businessman around in order to pull together the money needed to keep his family supplied with food.

As the author explains it: “Sex was a major industry during those lean and troubled years. It not only provided a welcome relief from the harsh reality of everyday life but was also a lifesaver for many young people who simply could not find legitimate work elsewhere.”

Perhaps as part of his search for “legitimate work,” after a stint in the Pacific theater in WW II, he soon establishes the Richfield gas station on Hollywood Boulevard as a take-out site for sex.

In order to fill out his roster of workers, Mr. Bowers invites fellow ex-Marines to come and hang out at the station during afternoon and evening hours. They, in turn, bring their girlfriends. Only when a customer requests a certain boy or girl does Mr. Bowers reveal to them the possibility for making some extra cash. And apparently, when faced with a 20, no one says no.

As Mr. Bowers explains it, without his co-workers or the station owner ever catching on, “Within two days three or four cars driven by gay men from the studio were pulling in every night for a few dollars worth of gas and a request for me to set them up with a trick. It happened so fast. Before I could take stock of the situation, I was becoming the go-to guy in Hollywood for arranging tricks.”

On top of this, there is Betty. Betty, Scotty Bowers’ girlfriend, who moves to Hollywood with him after his discharge. Who gets pregnant out of wedlock and never worries or complains or wants to get married. Who gives birth to the child (a daughter named Donna) and lives in a cramped apartment, even though Mr. Bowers is, by then, making plenty of extra cash in exchange for sex and tips in exchange for presenting Hollywood stars with the trick of their choice. Betty, whom Mr. Bowers will go on to marry one day—only to leave her for days on end—is one sweet babe who never says Boo:

“Betty was no fool. Even though she never brought it up in conversation she knew what I was up to. And she learned to live with it. She even took phone messages for me at home and not once did she ever ask what my relationship with the caller was. She was such a sweet, considerate woman that she never questioned my whereabouts on those many nights when I didn’t come home. That’s the unique kind of woman that Betty was.”

Unique indeed, that Betty. But then again this is a pretty unique story, and it requires unique people like Betty to populate it.

While Betty was waiting at home, looking longingly at the clock and rocking little Donna in her arms without complaint, Scotty Bowers was out and about, transforming himself from a gas station madam to a bartender who worked “private parties.”

In this capacity, so the story goes, Mr. Bowers came to know everyone who was anyone—not socially, of course, all public involvement that the author has with the Hollywood greats seems to be as the hired help; he never is invited to the party, but always comes as a party planner, a bartender, a chef, or a handyman, driving up to the gates of the Hollywood mansions in his old, broken down car.

Once Mr. Bowers becomes “Mr. Sex” to the Hollywood elite, the memoir morphs into a list of names (each of which includes, as Walter Pidgeon’s did, a helpful list of their best known feature films to help the reader place the name) and various interesting pecadillos.

We are given to understand that, just like the Duke and Duchess of Windsor before them, Vincent Price and his wife Coral Browne were both gay, and enjoyed both a happy, sexless marriage with many lovers on the side.

We are told that Tyrone Powers enjoyed golden showers.

And that bisexual Somerset Maugham liked to watch.

And that Desi Arnaz was insatiable when it came to women and ordered enough tricks from Mr. Bowers that Lucille Ball once publicly threatened the author to stay away from her husband or else.

We are also told that actor Charles Laughton had a fetish so strange, so vile, that the less said about it, the better.

And then there’s Spencer Tracy and Katharine Hepburn.

We are first told that Tracy was bisexual and that the reason publicly stated for his wife’s refusal to divorce him—the fact that she, actress Louise Treadwell, was a devout Catholic and did not believe in divorce—was a fabrication created by MGM to hide the fact of Tracy’s trysts with young men.

Then we are told that Hepburn was mannish to the point of freakishness (in the author’s opinion, based on the fact that she wore pants but not makeup), and that she was attracted to vibrant, dark-haired women. And then we are informed (and expected to believe) that the entire Tracy/Hepburn romance was again a fabrication of MGM, which preferred the idea of two of its greatest stars being adulterers instead of having it revealed that they were gay.

These revelations are no doubt meant to be shocking. Instead, they are bewildering.

The reader wonders why the intensely candid Hepburn, in the years after Tracy’s death, would continue to uphold the charade, even to the point of writing books and offering television interviews on the subject if the romance simply were not true? Surely the world had changed to the point that at an age past even that of Scotty Bowers now, she would have simply leveled with everyone, told the truth, and returned to Fenwick to recover.

Instead, Mr. Bowers stakes his claim on passages like this one about Spencer Tracy, and it doing so, breaks his reader’s suspension of disbelief, leaving the reader teetering on the maw of doubt:

“Before I knew it, it was past midnight. Finally, after another empty bottle of scotch stood on the coffee table, he began to undress and begged me not to leave him. I did not have the heart to say no. It was clear to me that Spence desperately needed someone to be with him. He was hurting badly. I could only assume that this pseudo-romance with Kate Hepburn was causing him distress. I turned off the lights, undressed him, then got undressed myself, climbed into bed with him, and held him like a baby. He continued to slobber and curse and complain. By then he had had so much to drink that I hardly understood a word he was saying. I tried to pacify him by saying that by morning all would be well and that we should try to get some sleep, but he wasn’t ready for that. Instead, he lay his head down at my groin, took hold of my penis and began nibbling on my foreskin. This was the last guy on earth that I expected an overture like that from, but I was more than happy to oblige him and despite his inebriated state we had an hour or so of pretty good sex.”

In reading this, it seems that Mr. Bowers had somehow discovered the technology necessary to take the image of great stars and through computer animation, placed them in circumstances in which they otherwise would never have been found. And the fact that Mr. Bowers has waited until every one of these Hollywood greats is gone (some into an obscurity that makes the reader wonder why they were included at all) and unable to defend himself or herself speaks volumes.

Whether or not the tales told here are true, we will likely never know. What is sure is that despite a certain prurient curiosity that the book supplies, these are stories that we never needed to know about—true or not.

After reading Full Service, no one will ever again be able to look at Charles Laughton in The Hunchback of Notre Dame in quite the same way.