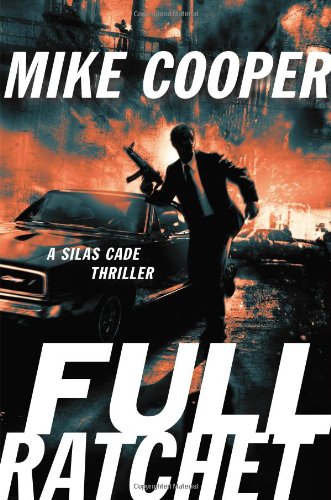 Told in the first person, Mike Cooper’s critically acclaimed novel Clawback introduced us to anti-hero Silas Cade, an auditor with attitude and fists at the ready.

And that’s before he starts using guns and fast cars.

Silas is known in the business as an extreme-measures accountant, and boy does he take his business to the extreme, working the dark and seedy corridors of Wall Street.

His latest mission sees him being asked by a friend to cover a job in western Pittsburgh, straighten out the crooked books and crooked personnel at the high-tech manufacturer, Clay Micro, one of many companies owned by venerable billionaire Wilbur Markson, one of the richest man on the planet.

Silas agrees—mostly as an excuse to look up his mysterious brother Dave, a dirt-track mechanic in the Pennsylvania backwoods.

When he arrives at Clay Micro he must bluff his way through a line of security and scrutiny to get inside to speak to Brinker, the corrupt CEO. He manages this—albeit partly successfully with the guards breathing down his neck.

Silas has a saying: A good audit isn’t a playdate with calculators. It’s a hostile interrogation. Brinker is just about to find out the true meaning of the word hostile.

“You think I’m accountant,” I said. “Here to cross-check invoices, review the bank recs, that sort of thing. Right?’

Brinker picked up his glasses and laid them on the gleaming hardwood desk, perhaps confronted by its vast size and weight. The office had that hushed, opulent feel of a hundred grand interior design contract. This gray light filtered through the windows, which must have created a glare problem on his plasma monitor, but which lit the room pleasantly.

I drew my Sig Sauer P226 from its around-the-back holster. It’s a nice workaday handgun, pricey to be sure, but heavy, reliable and intimidating. The suppressor made it look like something out of Hitman. Brinker, showing nice reflexes, immediately dove under the desk. Without really aiming I shot out the monitor, his telephone consol and for good measure the framed Harvard diploma on the wall.

“All right.” Brinker brushed broken plastic from the desk. “You’re not an accountant.”

For his punishment and arrogance, Brinker is ordered to drop his pants, while a two-foot swivel blade paper-cutter is called for by Silas, who has more than one way to cut the fat. . . .

Not long afterward, Silas comes up on the radar of lethal Russian mafiya, a hit team and a remorseless blond killer paradoxically named Harmony, who also happens to be drop-dead gorgeous—drop-dead being a very appropriate description, indeed, when this lady comes gunning for you.

Silas manages to locate brother Dave, who is quickly drawn into the fray when his backwoods garage is destroyed by armored assault. To add to his woes, his contact disappears into thin and possibly bloody air, and suddenly the brothers find themselves on the run, short of money, transportation, and weapons.

While Silas and Harmony are spraying bullets at each other, a strange attraction and respect develops between them. When she discovers that puppet master Markson seems to be manipulating the strings, she switches sides with a deadly vengeance and may god help anyone daring to get in her way.

Full Ratchet is an intelligent and impressively fast-paced thriller, filled with heart-stopping scenes, original characters, and a storyline graced with originality. The rusted steel mills, overflowing forests, and Appalachian landscape make the perfect backdrop. Silas Cade may just be the freshest protagonist to hit the pages of a book in a very long time. His wisecracking responses and wickedly dark humor will have you grinning throughout until his next adventure.