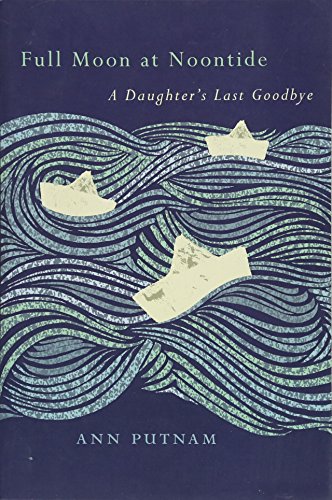 For anyone who has walked side-by-side in the culminating steps of the life of an elderly person, Ann Putnam’s Full Moon at Noontide is a healing balm. She understands. She’s been there three separate times. Her Uncle Henry. Her father. Her mother. Being with someone in their final years, days, hours is both a hardship and a privilege. She explains, “. . . pure love becomes when it is distilled through such suffering and loss—a blue flame that flickers and pulses in the deepest heart.”

The shared episodes are poignant. They involve handicapped seating, Maalox glasses, falls, and catheters—“the fragility of it all.” The three senior citizens begin to function as one unit. While backing the car out of the driveway, her mother drives, her uncle looks left, and her father looks right while shifting gears. Yet their teamwork is not enough against Mother Nature. During a winter blackout, they are without heat and electricity for five days. Safety in numbers is no longer a guarantee.

The house is sold and the trio is uprooted to University House, an upscale retirement community near where Putnam lives. It is considered a “dangerous business” to make friends when “death was a fall, a sneeze, a heartbeat away” so they “kept their attachments light.”

Putnam is honest about her role in their lives. When her uncle nearly loses her father’s wheelchair into oncoming traffic while leaving church, Putnam feels guilty about not making the effort to take them herself; however, she knows that it will tie up her entire day serving as chauffeur and running errands. She presents a realistic picture by admitting to her own shortcomings.

Uncle Henry was also difficult—“the evil twin.” When Putnam’s daughter describes him as “another grandfather,” he responds, “But then that would mean I’d have to have had sex with your grandmother.” He had a high appreciation for shock value. Putnam goes on to say, “My uncle was so difficult those last years, and my parents gave up so much to have him there. It had seemed so anguished at the time, but in fact it has left no bitterness. For the last twenty years, my uncle came along everywhere they went, how they couldn’t bear to leave him behind.”

Putnam’s memoir beautifully chronicles their final moments. While Uncle Henry is dying in the ICU, her father is being treated above him on the sixteenth floor. She is comforted by the words of the ICU priest, Father Bill, when asked how he can stand working in a hospital: “Oh, but this is a luminous place. It shimmers, if only you can see it. There’s a thin membrane separating the physical and the spiritual. We should walk with one foot in each place always. This place reminds me to do that. It’s a thin place.”

Putnam recounts witnessing Uncle Henry’s final moments. “Now his breathing changes. Two little puffs of breath, then a long, breathless silence that stretches out between one world and another until he catches it up again and pulls himself back into this life. He’s emptying the body of air. But there is no gasping, no death agony, just little puffs of air, little commas of breath, the sweet, soft sound of the spirit going someplace else. His eyes are open. The light has not gone out. All the times I had left him, and gone home to eat or sleep, to take up the threads of my life as best I could, and I thought please let go, please let this all be over, please just slip away softly into the night. Now I am grateful to be here and think how easily I might not have been.”

Putnam is also there when her father enters the death fugue as explained by a nurse— “What you see when you look at him is not what he’s experiencing. He’s not really in his body like you think. He’s someplace else now and doesn’t want to be called back.” Terror drives Putnam from the nursing home during the death vigil. She has a failure of nerve and panics.

Upon her return, the hospice chaplain arrives. “Go away! I want to scream, but polite to the end, I hold my tongue. They think I need company for this final stretch. They don’t know I’ve been here already. They don’t know how strong I’ve grown. I didn’t know it myself until now. This is sacred space, and I want it all to myself. I have no need for interpreters now. Father Bill is all I need, and he’s hidden safely inside. ‘We are not our bodies. We are not our minds. We are not our emotions, though they are all part of us. Our truest self is a spirit place that has always been there. He’s going toward it now. Everything else is falling away.’”

She is also witnesses her mother’s death. “After my father died she took to studying the obituaries in the paper. ‘When I read that someone died after a short illness, I think how lucky that person is. I’d be grateful for those words after my name.’ I know she’s thinking of how long my father took to die. Just after midnight, my practical, no-nonsense mother dies. I watch her spirit leave her body within moments, watch her face change into a death mask before me and become someone else. It’s all right. She’d wanted to be out of her body for so long—no ambivalence here, not a moment wasted going where she wants to go. Come on up, the twins say. It’s great up here. My father reaches down to give her a lift.”

Overall, Full Moon at Noontide is a must-read for anyone who has witnessed firsthand the passing of a loved one.