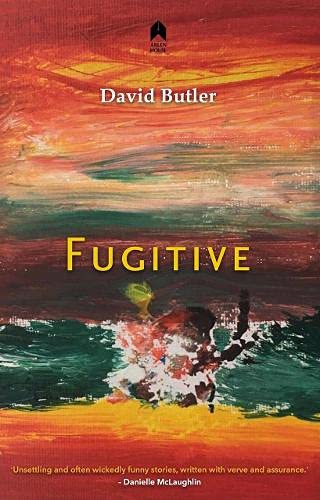 “At times uproariously funny, uncannily accurate, and glaringly insightful, David Butler’s Fugitive is a collective exposé on human nature delivered in entertaining snippets with such clever finesse it will reaffirm your enjoyment of the art of the short story.”

Award-winning novelist, poet, short story writer, and playwright David Butler’s second collection of short stories, Fugitive, is a delightful assembly of character-driven stories that, when pieced together, give the reader great insight into modern-day Ireland, while simultaneously depicting universal themes. These are swaggering, anecdotal stories, everyday slices of life made significant, visual as staged plays rollicking in pitch-perfect Irish vernacular, each with a pithy conclusion like a moral to the story.

The 21 short stories that make up Fugitive are primarily short in length and deeply human. Butler’s talent is the ability to set the stage in medias res, dropping the reader into the story with an immediate sense of familiarity. His narrative is direct and conversational, as in the case of the wildly surprising, hitch-hiking story gone wrong as two youths traverse the country. The story, “Taylor Keith,” opens with, “The mist rolling off the mountain was threatening rain, otherwise we’d never have taken that lift.” The journey from Dublin to Galway with a dubious stranger becomes a nerve-wracking misadventure when one odd shock follows another, until the narrator concludes of his driver, “By Jaysus, he was some cute hoor all the same.”

In “The Lie,” Butler posits the dilemma of Jack as he weighs the question of loyalty to a deceased friend named Ronnie to whom he’d served as best man at his wedding. Beside the casket, Ronnie’s widow asks him what really happened on that stag night long ago, remarking that ever after, Ronnie significantly changed until his life ended in suicide. Jack guards the hidden facts: “Ronnie’d had what they term ‘history.’ But what autopsy can disclose a state of mind?”

In “The Tailor’s Shears,” Butler weaves two subjects: the plight of a divorced woman past childbearing years and the frustrating unpredictability of the publishing world. After seven years of marriage, Emily Brooks wonders what to do with her life. “Spinster is a cruel word. A male word. As she examined the fissured puffiness about those eyes with a detachment that surprised her, Emily decided she would not endure the humiliation of placing herself back on the market. On the reduced to clear shelf.” When chance presents Emily with a local writing group, “It was as if a light had come on inside her head,” and the reader is taken through 25 erratic years of Emily pursuing the publication of her short story collection, in a one step forward, two steps back manner that renders the superb ending comical.

The spot-on use of Irish colloquialism throughout Fugitive animates each lively story. In “First Time,” the teammate of a deceased 16 year old meets his dead friend’s mother at the funeral and, after volunteering to help her around the yard, an improper relationship develops to dangerous proportions. The narrator says of himself, “OK, I can be a bit of a headbanger on the rugby pitch, but I’ve never been any use with the girls,” and “I’d never so much as snogged a girl.” After the illicit affair is discovered, the young man wonders, “I would love to know who dobbed us in. One of the neighbors, was it? Can you not?”

Tipping its hat to the sign of the times, the witty “Distancing” portrays the unintended consequences of social distancing when the anxious Emily calls her neighbor, in that short window of time while her husband walks the dog, to ask that her skimpily clad, 18-year-old Brazilian au pair be kept from her husband’s line of view. Nervous at being caught out by her husband, upon his return, Emily composes a smile, “the smile that, ever since the lockdown started, seemed only to put Frankie on edge.”

At times uproariously funny, uncannily accurate, and glaringly insightful, David Butler’s Fugitive is a collective exposé on human nature delivered in entertaining snippets with such clever finesse it will reaffirm your enjoyment of the art of the short story.