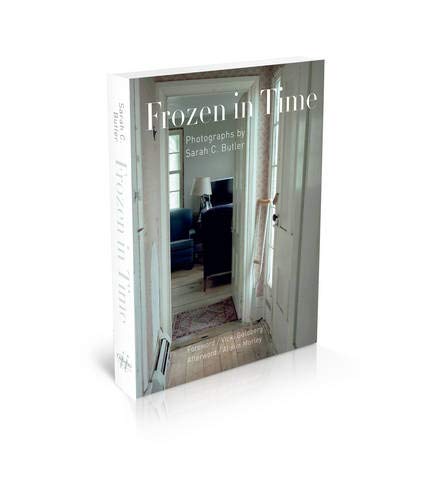 “It is a notable achievement when photography is used in healing a family.”

The photographic framing and compositions in Sarah Butler’s Frozen in Time are often a kind of Rorschach inkblot of the photographer’s mind; they reflect her strained and damaged relationship with her mother. Butler understood, although incompletely, the profound rift in their relationship and undertakes the task of moving back home with her mother. It is an act of faith she hopes will bridge the emotional gap between them.

Butler uses the act of photographing as an integral way of dealing with the world and its challenges, and chooses to document her prolonged stay through images. The photographs of her mother and the dilapidated farmhouse where she has chosen to spend the remainder of her life are a display of raw candor and unvarnished truth-telling.

At the beginning of the book there is a large two-page landscape that shows the old farmhouse, crisp and sharp at the far left, with the remainder of the image at far right becoming increasingly out of focus and darkening at the corners. This image is the clearest metaphor of the book’s topic.

Butler’s photos are beautiful, highly detailed, and have a lovely, fresh color quality. Many are perfectly suited for color, such as the red and green tomatoes on the white stove, the yellow rubber gloves on the sink, and the torn wallpaper against bare wooden stairs. Intriguing is why most of the images are in color. Color was not crucial to the telling of this story, and many of the images would have had a much more powerful voice in black and white.

Perhaps color is a cushion for Butler’s emotions, to rely on something familiar. Or it may be that she wanted the new memories of the house and reconciliation to hinge on color.

Butler is a highly talented photographer, however, her choice of photographing with a 5 x 7 inch view camera lacks the immediacy and flexibility of many other cameras. It inevitably enforces a very deliberate, reflective approach to the process of setup, focus, and photography, and perhaps it was another familiar and necessary choice.

These self-imposed limitations by Butler, including the fact that her mother is never named as a person, merely referred to as “my mother,” indicate something critically important about the psychology of the photographer, and her coming to grips with the emotional turmoil of the mother-daughter relationship, and ultimately make the poignant story more intriguing. The images from outside the doorway looking in, as well as the slightly off-kilter alignment that occurs again and again, tell us a great deal about the photographer’s subconscious unease at being in her mother’s home.

In the foreword by Vicky Goldberg, and in referring to the items Butler found in the house, such as drawings and clothing from her childhood, and her mother’s state of mind, Goldberg states, “Her mother evidently kept many things, including affection, to herself . . . ,” and “the house . . . sported a roster of unfinished projects, unfinished being a constant in her mother’s life.”

It is a notable achievement when photography is used in healing a family. And there are always challenges when adult children try to understand their relationship to their parents, especially after years of being isolated and uncommunicative. This book records a very personal, courageous, and insightful journey for Sarah Butler and her mother. In the epilogue Butler states, “She made the impossible so nonchalantly simple with her words. I still laugh now, remembering . . . I am grateful to have known my mother, though in many ways she remains a mystery. These photographs turned out to be evidence, not of her failure, but of the artist she made of me.”