Frontier Rebels: The Fight for Independence in the American West, 1765–1776 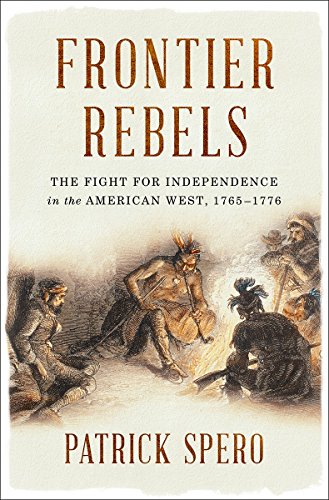 "Frontier Rebels makes for a good read, a lost bit of American history in a greater colonial epic in need of telling."

As is common these days, the full title of this book proves misleading. It largely deals with one largely forgotten episode on Pennsylvania's colonial western frontier in 1765. "The crisis on the frontiers of North America," however, "is relatively unknown for several reasons, foremost being the stories historians choose to tell and the stories people like to hear."

With the end of the worldwide Seven Years War in 1763, the British government, "besieged by debt payments," and seaport merchants wanted "to incorporate trade and good relations with Indians." "With peace and stability would come the trade and prosperity to free Great Britain from the burden of managing its North American colonies."

Frontier Americans, however, "saw Native groups as threats that needed to be removed," "a very different understanding of the Empire." At that time, colonial Pennsylvania had become critical as "the breadbasket for the British Empire" and supplied iron and wood for shipbuilding, as well as "hungry consumers" for the Empire's products.

A Pontiac Native American alliance began a war in 1763 to "recapture territory the French had ceded" to Britain in the Ohio Valley and Pennsylvania, however. "The warriors succeeded in destroying eight British forts and harassed half a dozen more."

Spero describes the resulting conflict as "one that would influence the coming of the American Revolution." It began as Irishman George Croghan's "ambitious—and possibly illegal" scheme to bring peace with the Indians on the Pennsylvania frontier with a huge trading mission to Fort Pitt. A man of "contradictory nature and murky motives," he could act as "a wall-intentioned man" but this venture would also make him an even richer frontier entrepreneur.

This dubious enterprise drew into it the hopes and schemes of General Thomas Gage, Indian Superintendent William Johnson, Governor John Penn, and Indian leader Pontiac. As the pack train set out into snow covered wilderness, reports circulated that the wagons "carried supplies that would embolden the Native groups to launch new raids on the frontier."

On March 6, 1765, James Smith, a former prisoner of the French and Indians, led ten white vigilantes disguised with black face paint, "the Black Boys" in attacking Crogan's pack train. They "let the cargo go up in flames."

That the property belonged to the coastal merchants only encouraged its theft and destruction. No trade goods posed a serious threat to the success of the coming peace talks with the Indians even as Indian groups threatened to break out in civil war.

William Smith, the local justice of the peace (and James Smith's cousin and brother-in-law), used his position to declare James Smith's followers as "an arm of the Empire, rather than an enemy to it." He argued that the Black Boys had the right to search for and destroy contraband going to the Indians.

As British troops moved to arrest the miscreants, mobs of supporters of the Black Boys numbering 200 to 300 men laid siege to Fort Loudon. On the Pennsylvania frontier, a decade before the battles at Concord and Lexington, British troops and civilians exchanged gunfire.

The author argues that the "story of the Black Boys doesn't fit easily into this idea of the American Revolution as a struggle for Liberty." It, but also dozens of similar events in the backcountry of that time, arguably "lingers today in the resentment of many rural Americans toward the federal government and the coastal elite."

American scholarship needs new studies of the colonial and Revolutionary War frontiers of America. The author writes of these events "in 1765, the frontiers of North America played a central role in the downfall of the British Empire," a claim not supported by the facts. A better case exists for "beliefs that drove the Black Boys to rebel continued to influence politics in the new nation they helped to create."

Frontier Rebels makes for a good read, a lost bit of American history in a greater colonial epic in need of telling. It would work better sticking to its story as an example of a lost history of the Revolutionary War frontier. The book has well prepared maps and a useful glossary of "Cast of Characters and Important Places."