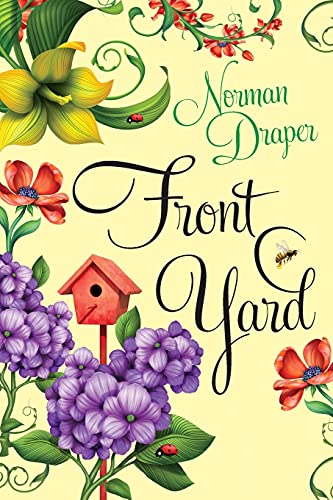 Front Yard is a garden-variety slapstick comedy with elements of farce, witchcraft, and fairies. In the Midwestern town where the action takes place, the “forces of horticultural good are . . . arrayed against the forces of horticultural bad in one huge battle to decide the fate of gardening in Livia [the town name].”

The protagonists are a middle-aged couple named George and Nan Freemont. Nine years before the story takes place, George made a boatload of money selling an invention. Since then they have lived off the proceeds, spending most of their time and resources on competitive gardening (last year they won the $200,000 prize for the town’s best garden) and their bibulous habits (gin and tonics and Merlot are their beverages of preference). They are running out of money, but are reluctant to forego their idle lifestyle.

The snake in their Eden is Dr. Phyllis Sproot, “a gardener possessed,” who is consumed with jealousy over the loveliness of the Fremont’s award-winning garden and who will stop at nothing (including witchcraft) to destroy it.

Problems come from other directions as well. Gwendolyn Price, a local historian, is convinced there is buried treasure in the Freemont’s garden. She is ruthless in her schemes to dig up the garden in search of the treasure, hiring a pair of bumbling crooks with the Dickensian names Artis and Nimwell Scroggit to do the unearthing.

Much of the action and dialogue is the stuff of television sit-coms and children’s cartoons. For example, Miss Price grows irritated with her soon-to-be-hired thieves. We read that,

“’Pay attention!’ shouted Miss Price. ‘Am I boring you, or are you dimwits incapable of showing a prospective employer a little consideration?’ She sighed. ‘I guess good help is hard to find these days in the historic antiquities business.’”

When Shirelle Eadkin, the Freemont’s landscape intern, is presenting her final oral report to her academic advisor, Professor of Floriculture Dr. Hilda Brockheimer, she notices that Brockheimer’s mind is wandering.

“’Am I keeping you awake, Dr. Brockheimer?’ Shirelle barked. The tone and volume startled Dr. Brockheimer out of her somnolence. What was that she’d said? Why, the very effrontery! She’d never had a student speak to her in such a manner.

A few minutes later, Shirelle’s blatant rudeness is forgotten, and the two are having a lively and amicable discussion about the Nan Freemont’s “plant whispering” skills.

Any time a character makes a joke, we are sure to know by the ha-ha clue at the conclusion of the quip: “’Can’t?’ barked Artis. ‘What do you mean, can’t? Don’t be afraid, Mrs. Tuertle; all we can do is fire you. Ha-ha.’”

When pondering the suggestion that Nan and George should encourage fairies to take up residence in their garden, Nan says, “It’s also assuming that, if they exist, we’d want them to come anyway. I imagine their little nighttime frolics among the buttercups can be quite noisy. Ha-ha! Ha-ha!”

The most cartoonish scene occurs when a backhoe punctures a gas line, causing an explosion.

“Nimwell groaned in pain. There was a rumble underneath him followed by a shaking. Then, he felt like he was getting swallowed up by the earth and vomited out again. He vaulted skyward and somewhat laterally. Giggling uncontrollably, he passed in what seemed like a slow-motion transit over the Freemonts’ backyard and house, Sumac Street, and just barely as his descent began, the tops of the trees that bordered Bluegill Pond. He landed in the lake itself with a sickening thwack, deposited flat on his rear end in three feet of water. His landing had been further blunted by a two-foot-long catfish and a foot of soft, mucky lake bottom beneath it.”

The backhoe, which also had been flung through the air, was unharmed because, “So perfectly had the backhoe landed that only those few flowers directly under the wheels and bucket had been smashed.”

The climax of the book is an epic battle between horticultural good and evil. Here Dr. Sproot uses her spell-casting skills to call up all the weeds ever killed in the community to battle against the flowers and fairies. While the weeds advance, “with really bad attitudes,” Sproot peppers her foes with BBs.

George repels the pellets with a baseball bat, and Nan and the children arm themselves with angel’s trumpets, firing off mind-altering pollen from the flowers. Just as it looks like all is lost, the garden club Rose Maidens and fairies advance on the scene to help save the day. It’s never clear, even to the battle’s participants, whether this wondrous nighttime fight was real, the results of an alcoholic stupor, or merely a dream.

This tongue-in-cheek romp through the worlds of academe, competitive gardening, garden club ladies, passionate genealogists, witchcraft, and fairies has delightful moments, but the silliness and outlandish plot outweigh the positives. Worse, perhaps is that for me none of the characters were particularly likeable. As a result, my level of caring remained minimal. It is evident that the author had a great time writing this book, far more fun than I had reading it.