Friendkeeping: A Field Guide to the People You Love, Hate, and Can’t Live Without 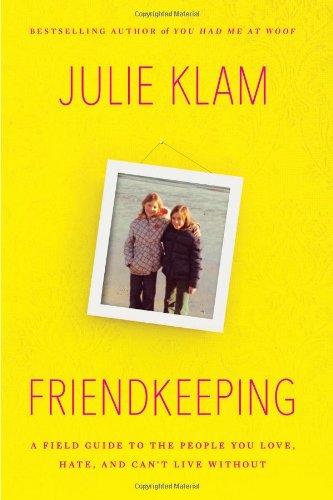 “Friendkeeping is a Hallmark card of a book.”

Perhaps more than anything else, Friendkeeping, the chipper new study of the bonds that bind us by Julie Klam, reminds of the eternal gulf between the sexes. No book this year, save Fifty Shades of Grey, has seemed so clearly targeted for a female readership. No other book has made this reader feel as alien—as much of an apparently unfeeling and unaware lug—as this book has.

“Lasting friendships are a kind of miracle, but one that can’t be neglected. They need nurturing and thought, caring, and even a bit of preparation for the conflicts and challenges that arise. Friendship might be free, but it requires a real, solid investment. And you know, the occasional baked good never hurt.”

But that’s how our author sees it.

And she expresses her opinion in language combining an overweening romanticism and a dizzying sense of awe:

“One of the truly amazing things about a friendship is it’s something you and this person have created for yourselves together. You have to build it. You don’t get friends automatically like you do family members, and there is a good deal of work in these relationships of choice.”

Perhaps it is just as simple as whether or not Friendkeeping and Julie Klam’s rather relentless way of stating and restating her thesis (“I’m a middle-aged person who uses the term ‘BFF’ without irony.”) again and again is your particular cup of tea.

Therefore, I offer this brief passage as something of a litmus test:

“I had two near-death experiences in a single night because I answered the call of friendship. I wish I could say I had sacrificed myself for a friend in the trenches of Verdun, but I was just in a rock club with my old college friend Katie. She had a crush on a hardcore punk singer and made me go to his shows with her. Never has there been a more reluctant denizen of the mosh pit. I believe I was the only one in there yelling, ‘Ow! Quit it!’ Anyway, I was standing in the pit when a shirtless guy landed on my head. Near-death experience number one was that he almost flattened me. Near-death experience number two was his sweaty chest touched my face and I’m pretty sure he was the last known carrier of bubonic plague.”

Those who find humor in the above—and especially those who feel that the humor is mixed with more than a dollop of sage testimony as to the nature of human bonding at its finest—will find much to admire in Friendkeeping. They should, but all means, stop reading this assessment here and now.

The rest of us will, upon finding this paragraph opening Chapter 9: The Call of Duty, know in our hearts that there is Just. No. Hope.

Friendkeeping is a Hallmark card of a book: “My friends are the comfort food of my life and they help me get through the day. I hope I do the same for them.”

A book that is at once a celebration of the unselfish behaviors inherent in friendship and one of the most ponderously self-congratulatory screeds (“Like the story of how I was born, I never tire of hearing how I became friends with somebody.”) ever to find its way into print.

Indeed, for those of us who believe that friendship, like shit, happens, will find Friendkeeping is less to be read than it is to be endured. And that this is due, in no small part, to Ms. Klam’s tendency to over-share.

This is largely due to the fact that the friends who are “kept,” as the title promises, are her own.

Thus, we are introduced to Patty and Barbara and Rebecca and Molly and Vesna and Mae, and Ann and Laura (who do a radio show with our author) and, especially, to BFF Jancee, who looms large in these pages. We also meet occasional (gay) male friends, most notably Jay, and occasional frenemies like Veronique (“She looked like a model and had the brains of a physicist.”)

But the author is not contented, despite her title, to stick with friends, but also includes family: her father and her older brothers, Matt and Brian, and her strange, bewildering mother, whose chief character flaw is that she has never felt the need for close female friends of her own:

“I grew up insanely frustrated by my mother’s lack of a best friend.”

We learn at some length that the mother had an apparently unnatural bond with her sisters, who she considered her best friends, something that the author, in her insane frustration, refuses to acknowledge.

And then there’s Violet.

Violet is Ms. Klam’s precocious, lovely young daughter. And I get that the author feels a deep and abiding love for her child. I applaud it, in fact. But the many pages of the book dedicated to the child and her new generation of friendships of her own impact the reader in a manner not unlike that experienced when an acquaintance traps him in a corner at a cocktail party or neighborhood gathering and attempts to force him to look at all the family pictures that have been stored on their iPhone.

“When Violet was born I was quite obsessed with what was going to happen with the belly button. Books said the belly button fell off, and for some reason the thought of that was disturbing to me. I’d never heard that before, and I worried that other things would fall off, too.”

Ms. Klam seems thoroughly convinced that her readers are captivated by her belly button fears, as well as in the difficulties she faced (preeclampsia, if you must know) while pregnant, of her gym habits and her work history (she once worked for David Letterman and wrote for O magazine).

But it’s all a bit too high maintenance. I’d rather be watching “Honey Boo Boo.”