Friend: A Novel from North Korea (Weatherhead Books on Asia) 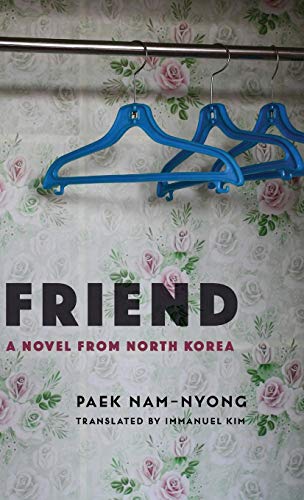 “Friend offers a fascinating glimpse into the realities of North Korean life. It reminds us that the people of that country may face hardships, but they also experience the same domestic challenges that afflict humans everywhere.”

It’s a curiosity, at least, this novel by a North Korean writer. First published in Pyongyang, North Korea, in 1988, it appeared in South Korea in 1992 and in a French translation in 2011. While the book is somewhat dated—a lot has happened in North Korea since the ’80s—it provides a far more realistic glimpse of life in that country than, say, The Orphan Master’s Son by Adam Johnson.

At the center of the novel is Jeong Jin Wu, a Superior Court judge who handles divorce cases. Jeong takes his responsibilities very seriously, and when Chae Sun Hee comes to him seeking a divorce from her husband of ten years, Lee Seok Chun, he is overwhelmed. “Distress weighed on Judge Jeong Jin Wu as he stared at the divorce petition on his desk. Much like a fisherman trying to untangle knots in a fishing line, Jeong Jin Wu was upset by the burden of having to deal with another family’s misery.”

The judge feels compelled to investigate. He learns that Seok Chun is a factory lathe operator and Sun Hee, who formerly worked with her husband in the factory, is now a celebrated singer in the Provincial Performing Arts Company. When the judge visits their home to question the couple, he meets their seven-year-old son, Ho Nam. While husband and wife seem to have legitimate complaints about each other, Jeong is conflicted. What is the best course of action for this couple? For their son? For the nation?

While contemplating these questions, the judge is haunted by an earlier case in which he granted a divorce and awarded split custody of the couple’s children—one child to each parent. With more experience, he second-guesses that decision. At the same time, he has doubts about his own marriage and whether it can last. His wife, Han Eun Ok, is an agriculture researcher dedicated to improving production in her home village’s poor soil. Instead of staying with him and devoting herself to him and their son, she spends much of her time at her research lab in the village. He resents her absence and wishes for a more normal, by which he means traditional, home life.

As the book’s Afterword tells us, the novel at the time of its first publication was a departure from the hyper-nationalistic fiction promoted in North Korea. Instead of addressing purely pro-regime themes, Friend looks at real people and their daily struggles. It isn’t entirely apolitical, though. Ultimately the Judge seeks a solution to the problem he faces that will be in the best interest of society, not necessarily the selfish interests of the individual.

In an interview by the translator that appeared in the Journal of Korean Studies (Volume 21, No. 1, Spring 2016), the author, himself a former lathe operator, describes his work for the North Korean Writer’s Union and membership in the April 15 Literary Production Unit where his responsibilities include writing narratives that glorify the exploits of the “Great Leader” Kim Il Sung and the “Dear General” Kim Jong Il. “My stories always try to portray characters who serve their country, their collective, and their society. I try to raise the level of political consciousness by indicating social problems and methods of resolving these issues.”

At the same time, the book provides an interesting contrast with another translated Korean novel making its debut in the U.S. this spring, this one from South Korea. Kim Ji-young, Born 1982 by Cho Nam-joo traces the life of its protagonist, a woman born into the rapidly developing South Korea of the ’80s. Despite modernization, however, the role of women in the country has barely evolved. Kim’s family favors their son over their daughters, leadership positions in her school are filled by boys, and her job search after college is fraught with gender bias. When she finally does land a job, her male colleagues are paid better and first in line for better assignments.

Unlike Friend, Cho’s novel offers few surprises to anyone familiar with South Korea. It has always been a male-dominated, if not sexist, society, and the country has been slow to embrace change. Friend suggests that North Korea is, on its face, more egalitarian than the South, with men and women striving side by side for the betterment of the country. And yet there is still an expectation that women bear the traditional burdens of homemaking and child-rearing.

Despite being dated, Friend offers a fascinating glimpse into the realities of North Korean life. It reminds us that the people of that country may face hardships, but they also experience the same domestic challenges that afflict humans everywhere.