Friday Night Dinners: Menus to Welcome the Weekend with Ease, Warmth and Flair 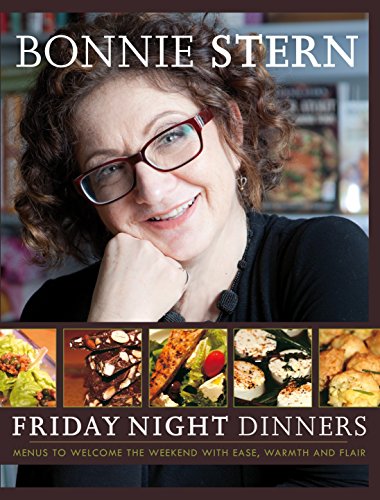 Which cooks will appreciate Bonnie Stern’s Friday Night Dinners? Couples who used to entertain—before kids came along and made that feel impossible; experienced cooks who need some fresh ideas; competent cooks who find matching dishes for a menu challenging; cooks who like the thought of dinner parties but not the thought of Dinner Parties in all their fanciness . . . in short, just about everyone but truly brand-new cooks.

Stern, a Canadian food writer and cooking school owner, puts forth a strong case for Friday night suppers as a chance to relax—even if a long workweek makes that seem daunting at first. Entertaining on Saturdays, she says, leads guests to expect something elaborate, and Sunday guests start to get anxious about the week ahead, leading them to call it a night earlier than a host might like. On Fridays, cooks can keep the menus casual, and guests will be glad to pitch in.

Stern, who grew up in a Jewish family that was not religious or kosher, nevertheless gained a deep appreciation for the family ritual of Friday night dinners (to that end, the recipes in this book are “kosher friendly”). She offers menus for Rosh Hashanah and Passover, but the book ventures far beyond those, covering a wide range of cuisines and cooking styles, including vegetarian, comfort foods, Middle Eastern, Italian, South African, Indian, Asian, and Moroccan. The recipes keep things as simple as possible, using strong seasonings for full flavors throughout. Stern generally avoids precious ingredients, or she offers alternatives, such as olive or walnut oil for argan oil in a Moroccan bread salad.

The menus show a teacher’s generosity. They include options and variations, sprinkled with tips that even experienced cooks will find useful. Stern notes, for example, that good red wine vinegar can be hard to find, so she uses sherry vinegar instead; she uses dumpling wrappers for pierogis; and she uses cupcake paper liners instead of tearing up little pieces of foil to line pastry shells for mini quiches.

The recipes also take very acceptable shortcuts where they can, not with ingredients, but with technique, as when Stern shapes spanakopita into quick rolls instead of time-consuming triangles. The filling for her chicken dumplings takes mere seconds to put together, and she forms them with an open top, a speedier method than sealing the edges in a turnover-style dumpling.

That recipe, like so many in the book, doesn’t give great detail in its instructions, but for all but the most inexperienced cooks, it doesn’t need to; it gives just enough. One place, though, where more detail would have been useful is in the rice pudding recipe, which uses the nice twist of caramelized sugar mixed with coconut milk. If they follow the barebones instructions to “cook sugar, without stirring, over medium-high heat for 5 to 7 minutes, or until sugar melts and turns golden brown,” cooks who haven’t made caramel before may find this leads straight to a scorched mess.

Stern’s food preferences come through in the book; she likes to grill, for example, and butternut squash and skewered meats keep popping up (although Stern generally eschews cutesy food, it’s hard to resist her idea for lamb and beef kebabs, fragrant with cumin, cinnamon, and lemon, shaped around cinnamon sticks). Of the 12 beverage recipes she offers, six are for sangria variations and five for martinis. Strawberry Lime Sangria couldn’t be easier, even when made with homemade simple syrup and lime juice instead of a margarita mixer. Other drinks provide even more substantial flavors, such as apple-cranberry sangria, ginger-pear sangria, and lemon basil martinis.

Many recipes will seem familiar, but often with a twist. The book opens with a standard recipe for hummus, but topped with cilantro pesto. Stern follows that with a recipe for hummus pancakes, to use up the leftovers, topped with date honey or hot pepper jelly. (She also provides recipes in other recipes for leftovers, such as turning polenta into polenta fries, or challah into a French toast casserole.) She takes butternut squash and slices it into ribbons, as some cooks do with carrots or zucchini, for a simple but different side dish. Her apple cobbler, while a bit too syrupy-sweet, uses an offbeat, easy crust technique of mixing eggs into dry ingredients, then drizzling melted butter over everything, resulting in a crisp, crunchy top. American readers may be familiar with pavlova, a crisp meringue dessert, but Stern’s pavlova roll will be a new idea to many, a meringue cake rolled and filled with passionfruit cream.

Other twists come in chicken noodle soup, made with smoked chicken and edamame; couscous packed with almonds, hazelnuts, pumpkin seeds, and sunflower seeds; gougères filled with scrambled eggs; and butternut squash (there it is again!) mixed with pumpkin seed oil, sage, and mozzarella balls, with an optional recipe for pumpkin seed brittle to sprinkle on top. All those twists will keep Stern’s readers doing a flip of their own—flipping down the corners of many pages to mark the many recipes worth trying.