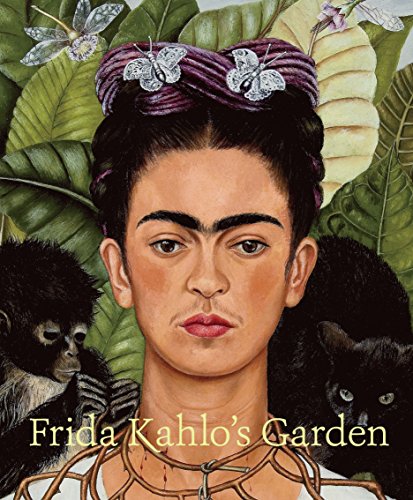 Last year The New York Botanical Garden mounted an exhibit called “FRIDA KAHLO: Art, Garden, Life.” Frida Kahlo’s Garden is the book written to accompany the exhibit. In the book are more than 20 of Kahlo’s paintings and works on paper that feature plants, as well as archival photographs that illustrate the evolution of Casa Azul, Kahlo’s childhood home that she later inherited and lived in with her artist husband, Diego Rivera.

Located in Coyoacán, a borough of Mexico City, Casa Azul is now part of the house museum dedicated to Kalho’s life. It was in this brightly painted blue home that Kahlo was born, raised, painted, gardened, spent many years with her husband Rivera, and died.

Chapters cover varying aspects of Kahlo’s life, art, garden, and places associated with her, written by experts in the field. Readers can learn about “A Nahuatl Garden of Delights,” a treatise written by Juan Fafael Coronel Rivera, grandson of Diego Rivera, explaining the ancient Nahun (Azetc) influences and symbolism that inspired the pyramid Rivera built in the garden at Casa Azul in 1941.

“Creating the Illusion of the Countryside: Frida Kahlo’s Post-Revolutionary Mexican Suburban Domestic Garden” by Robert Bye and Edelmira Linares makes the point that, “Her [Kalho’s] love of nature and its inherent beauty is projected in her paintings as well as the garden that enveloped her in the Casa Azul. She made her personal imprint on the home by transforming the European-style courtyard into an eclectic jungle of Mexican plants, animals, and cultural artifacts. The garden flora created the illusion of the Mexican countryside and reflected her way of expressing her nationalist identity as well as her fascination with vegetal representations in archaeological pieces and Aztec codices.”

“Gardens and Landscapes of Frida Kahlo’s Mexico City” by Kathryn E. O’Rourke explores the landscape design trends in Mexico in the 1940s.

The book includes a double-page spread listing plants. The three sections are: plants identified in archival photographs and Kahlo’s garden plan drawn up around 1940, plants found in Kahlo’s artwork, and typical Mexican garden plants. Curiously, very few of the plants in the Casa Azul garden list are cacti or succulents, although Rivera and Kahlo worked hard to remove much of the lush tropical plantings from her parent’s time, replacing it with prickly pear, yucca, various species of columnar cactus, and agave. The plant palette they chose was a celebration of Mexican native plants.

Now that Casa Azul is a museum, the garden has been changed yet again. Today the courtyard garden is carefully manicured, featuring lava stone paths that wend around beds planted with tropical ground covers. Cacti and succulents in containers add color and texture.

Pre-Hispanic art from Rivera’s collection are still displayed on the red pyramid, which, Juan Rafael Coronel Rivera explains, “was positioned so that it was surrounded by beds divided by paths, which function metaphorically as islands (chinampas) divided by causeways.” When it was built, the paths were lined with organ cacti.  Today the nearby beds are planted with banana, Boston fern, and palms.

The book’s reproductions of Kahlo’s paintings and works on paper are accompanied essays giving insight into each piece. In her annotation of the 1931 painting, “Portrait of Luther Burbank,” Joanna L. Groarke, a curator at The New York Botanical Garden, writes, “The skeleton in which Burbank is rooted . . . seems to be nurturing the figure above. This symbolism reflects Kahlo’s fascination with the life cycle . . . Nancy Deffebach posits that Kahlo depicts Burbank in the manner of a botanical drawing—showing the roots, stem, and leaves and clearly labeling the ‘specimen.’”

The goal of the 2015 exhibit at the New York Botanical Garden and the purpose of this book was “to achieve a new understanding of her paintings by looking at them through a horticultural lens.”

Unfortunately for the book, most of the writing is academic and turgid (Karen Daubmann’s contribution is a welcome exception). Rarely do any of the essays succeed in capturing the vibrancy, magic, and mysticism of Kahlo’s works, and while her garden is interesting because of its provenance, it is not a landscape that would otherwise be considered a worthy subject for an exhibit or book; however, those looking for a fresh angle on the life and work of Frida Kahlo will find new images and information and perhaps new insights into this iconic 20th century artist.