Fresh from the Farmers' Market (Reissue): Year-Round Recipes for the Pick of the Crop 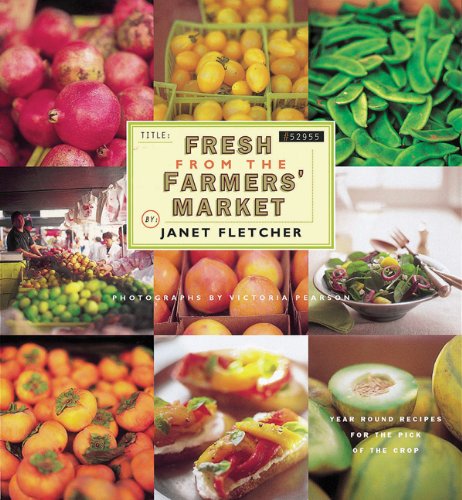 When was the last time you bought a cookbook and immediately went out and purchased the ingredients to cook all the recipes? Never, right? But you will come close with Janet Fletcher’s Fresh from the Farmers’ Market.

Organized around the seasons, this cookbook is a survey of recipes using peak seasonal vegetables sold at farmer’s markets. Revised, its rerelease in 2008 coincided with an exponential growth in interest in local produce and farmers’ markets. Fresh from the Farmers’ Market is a charming snapshot of “local” food philosophy in the days before dairy was an ogre, and meat a menace.

A cookbook made with a pinch of treatise, Fletcher checks all the “local” food movement’s boxes, suggesting that farmers’ markets offer, freshness, variety, preservation of heirloom produce, create community, promote healthy eating, etc. Totally on board with all that.

This book is a perfect Christmas gift. Sick of stogy holiday food and craving fresh vegetables? This book offers a solution to both. One particularly nice touch is that the titles of dishes include the dominant ingredients, for example, there’s not a lot of mystery in “orecchiette with chard and ricotta salata,” and she also includes a seasonal glossary of vegetables in each section, which contains a description, advice on selection and storage. This is followed by an alphabetic list of all the recipes for that season. However, although I didn’t cook a dish I didn’t enjoy from this book, it’s ingredient lists left me with more questions than answers.

In keeping with its central theme of seasonal food, all but one of the dishes cooked were from the winter section. The one exception, autumn’s “chestnut and sweet potatoes soup,” came about because I just happened to have all the ingredients on hand. The hardest part of this dish was shelling and peeling the chestnuts. First you have to carve an X into their brittle outer shell, then boil them for ten minutes, then—theoretically—the fluffy inner skin peels easily.

Two wannabee vegans swung by my house Sunday evenings on their way home from winter hiking. They were hungry so I had plenty of salads and appetizers on the table and then made them help. With the three of us working, the chestnuts were ready in no time. One admires chestnuts, and neither Thanksgiving nor Christmas would be complete without chestnut dressing, but pairing them with sweet potatoes was a first. Brussels sprouts, sure, but I was somewhat skeptical. I shouldn’t have been. The result was a rich, nutty, velvety, and surprisingly sweet soup.

The day I made it my kids had climbed three ice-covered Pocono peaks, Blackhead, Blackdome, and Thomas Cole, and then driven home through the tail end of a snow storm. Do you have any idea how much mountain climbing vegans eat? They munched their way through “braised red cabbage with pear” and “braised chard with chick-peas,” guacamole (not in the book), a block of cheese (Vegans! Eyeroll), a loaf of crusty bread, some olives, an arugula and pear salad (not in the book), If the soup had been less substantial (although they did insist I hold the cream), I’d have been scared for my life.

Perhaps the real test of a cookbook is not that you cooked everything in, it’s whether you cook it twice. No on the soup, it was just too exotic, although it was still enjoyable. If peeling chestnuts isn’t appealing, you can buy them in jars already peeled at most supermarkets around the holidays, and in small packs in Asian stores most of the year. Doing it that way is more expensive, and you miss out on that wonderful preparation quality time with family or friends.

With my daughters home for Christmas (one who thinks I should be a vegan; the other a carnivore’s carnivore), I decided to cook “steamed mussels with celery root and aioli.” Mussels are a family favorite and appeared on the table frequently when the girls lived at home. I paired them with “whipped parsnips and potatoes,” and roasted brussels sprouts (not in the book).  The mussels were cooked in a broth based on a variation of the standard mirepoix, shallots, carrot, celery and celery root. The standard white wine and garlic reassured, and this somewhat unusual, but aromatic soup hit the spot. Oh, wait, I almost forgot to mention the aioli. . . .

The “whipped parsnip and potatoes” were fussy to make, necessitating a couple of pots, one for the vegetables and another to cook the cream and with chives. This was a well-balanced dish, the earthy sweetness of the parsnips complimented the fluffy creamy potatoes. It was beyond delicious, but it’s definitely a side for special occasions.

Fletcher, the author of many books on food with straightforward titles including Beer & Cheese, seems never to have met a dairy product she doesn’t like. This is refreshing to those who find dairy the single biggest barrier to crossing over to veganism. But even a dairy lover can get overwhelmed, and several recipes in, I did. And Fletcher is no vegetarian, either. What is so intriguing about this book is the animal products she chooses.

Wouldn’t you imagine that free range chicken, humanely raised pork, and grass feed beef would find its place in such a nonvegetarian, healthful eating, cookbook? Not so. Meat in Fresh from the Farmers’ Market is limited to chicken broth, sausage, bacon, pancetta, shellfish, and anchovies. You have to wonder how many upstate farmers are raising anchovies. Seriously, if you’re going to include animal products in a health-minded cookbook why go for all the smoked and cured ones?

Then there’s the outright weird, like, “blood orange compote.” I was excited about this, and with good reason, its base is a sugar syrup made with cloves, ginger, cinnamon and white wine. What could go wrong? The sweet liquid is brought to the boil, reduced by half, and then, while hot, poured over the raw orange slices and left to steep overnight. What I ended up with wasn’t bad, just strange. The textures—silky syrup versus tart juicy oranges—just didn’t gel. Despite pouring the boiling syrup over the raw slices, the slices didn’t really change. Not terrible. I’d eat it again if you served it to me, but it was something of a disappointment.

I found reason to like all the dishes I made, but only one impressed me enough to add it to my regular rotation. That was the “braised chard with chick peas.” Chick peas are one of those foods stuffs we all know we should eat more of. And who has ever come across a hummus they didn’t like? But I rarely find a chic pea recipe that is both simple and delicious. I’m not sure if it is the onion and garlic, the dried chili flakes, or the braised chard, but the resulting salad, which can be served either warm or at room temperature, was delightfully nutty and savory.

All that winter cooking leaves one hankering for spring, and not just for the chance to try out another season’s dishes. Fresh from the Farmers’ Market is not a great cookbook, but it’s an interesting, fun one. Recommended.