A Frenzy of Sparks: A Novel 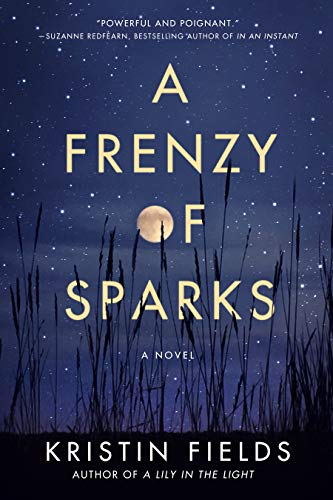 “The author’s portrayal of the adolescent girl is so graceful, so intelligently sensitive, the writing so lyrical and lovely . . .”

A Frenzy of Sparks, Kristin Fields’ sophomore novel, is an intricate, crafted observation of explosive change in multiple contexts. The author lays out Gia’s coming of age, the changing body, awareness, and relationships of a 13-year-old girl in the turbulent zeitgeist of the mid-sixties. And more: Fields sets the story in an older community as it is increasingly fractured by new, post-war housing construction and the corrosive effect of drugs as they enter and then blow up a once-stable family and neighborhood. Change, indeed.

Gia, and her older brother Leo, are the children of a Korean vet turned police officer and a jury scheduler. The Italian Catholic family and maternal relatives all live on the same street, in small houses in Queens, New York, next to the marsh and bay Gia loves, where she boats with her father and swims in the canal with her adored older cousin, Lorraine. It’s a family out of the fifties, except that mom has a job; the parents don’t read about parenting, they just do it. The kids are expected to do chores, to do as they’re told, and to know they’re loved without hearing about it six times a day. Families live near each other, and they take care of each other and their old people.

Having just read Rachel Carson, Gia dreams of being a scientist, of protecting land and water from pollution, as opposed to becoming the girly girl her mother wants headed for a traditional marriage, getting ready to live the same life as the family adult women who are engrossed with in their big, shared Sunday lunches, their homes, and children. Gia’s obsession is something of a joke to much of her family. Agnes, her mother, pushes Gia to learn makeup from Lorraine, and Gia tries.

“Inside, Gia didn’t complain about pouring milk from the big container to a small one or putting sugar cubes in a bowl with a tiny spoon, even though it was ridiculous, just like ironing shirts or polishing spoons or wiping down the kitchen wallpaper after cooking fish. Women’s work stank. Polished silver wasn’t necessary for survival, not like fishing or chopping wood. But at thirteen, it was expected of her. She hated it. . . .

“Gia sighed as Lorraine set up shiny tubes on the desk. This was probably Agnes’s idea now that Gia was starting eighth grade, but the extra attention from Lorraine was nice. Gia sat up straight, closed her eyes for the tickle of brushes and powders over thin skin, delicate bones. A girl was a terrible thing to be most days, but Lorraine made it seem easy, even for Gia.”

A teenage cousin, Ray, has begun experimenting with drugs in the basement of his house. He introduces his younger brother and Leo to them and is even able to induce—with cash—Gia to send her friends to him. She does it, even though Ray’s folded twenties feel dirty to her.

She soon backs off and gets a job working at a bakery with Lorraine. Nobody tells on Ray, though, and Ray sets Lorraine up on a “one time, you’ve have to do it” date with a drug dealer. Gia senses, and Lorraine knows, that it will not end well, yet Ray compels her to go, buys her a sexy dress and shoes. It is the outcome of that date that begins the unraveling of the world.

Gia feels responsible for not having had her father intervene to help Lorraine. Later, when her brother has become an addict and her parents’ attempts to intercede are successive, spectacular failures, she thinks she can undo their defeats and her own regret. She tries to take matters into her own hands. It won’t hurt, either, to show that she’s strong, smart, independent and capable.

At first, it appears she may succeed, but as it happens, it won’t be the only time that Leo nearly costs Gia her life—this time she knows it’s deliberate--and Fields plays it out in just one of the pulse-pounding scenes in this original, richly-written novel.

If there is a flaw in the narrative, it may be in the occasional sentence-long lapse out of the Gia’s third person point of view into that of an omniscient narrator. The author’s portrayal of the adolescent girl is so graceful, so intelligently sensitive, the writing so lyrical and lovely, that it is a bit startling when we are taken out of her mindset into that of another character. However, it is a minor flaw. The climax is rushed but powerful and compelling, and the novel is a page turner, then a tragedy, before the Epilogue looks into the future for healing, redemption, and hope.