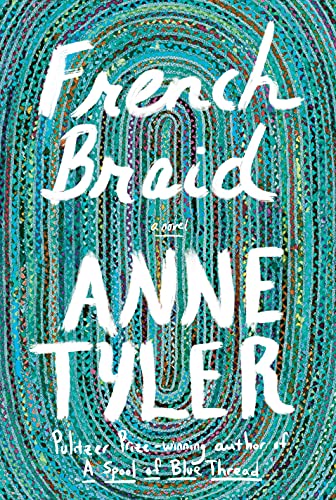 At first glance, the new novel by Anne Tyler, French Braid, breaks all the rules of exemplary fiction. The opening page is so mundane and forgettable, it would be buzzed offstage in a First Page competition at any writing festival. There’s little action, nothing at stake, and it is filled with recent backstory that includes a lot of names.

The two main characters in the opening scene, Serena and James, a young couple, are gazing at an arrivals and departures board in a train station in Philadelphia, wondering when their train will be listed. The sound “clickety-clack” are the two words that stand out in the void of anything interesting happening. It’s difficult to get an image of either person, or a sense of the smell of the place, or even the temperature. “James was so good-looking that she’d been surprised when he suggested going for coffee after class,” is what the reader gets when they first meet James. And when viewing his childhood photos in an album at James’s childhood home, Serena says “He’d been a cute little thing.”

The reader is introduced to Serena’s family when she sees someone pass her in the station who either could be her cousin Nicholas or not—a cousin whom she may or may not recognize from the funeral of her grandfather Garrett. Could be the son of her mother’s brother, David. At this point, in Chapter 1, if the reader knew all these people, there might be a flicker of interest. But at this beginning, the reader hears names and identifying relationships, with no emotional stakes or wild stories to anchor anyone to their own identity, and all those names and relationships—so what? Too much to keep track of. A family who only sees each other at weddings and funerals. Why should we care about them? We were promised “a brilliantly perceptive journey deep into one family’s foibles.” An epic family saga.

The narrative begins in the mind of Serena, who has been a recent guest—for the first time—at her boyfriend’s family home, and in the train station both engage in a lightweight conversation. Author Tyler asks irrelevant questions that are never answered, perhaps because they’re insignificant. She inserts a useless question about the train’s departure time into the narrative, “Why did they wait so long to post their gates here?” To which the reader continues holding up their end of the reader’s agreement: to keep reading as the story will unfold in an interesting if not fascinating way. After all, Tyler has written 20 novels. Her 20th, A Spool of Blue Thread, was shortlisted for the Man Booker Prize in 2015. Her 11th novel, Breathing Lessons, was awarded the Pulitzer Prize in 1989.

But on the first page, Tyler does what she repeats throughout the novel. She suggests something—and then takes it away with the words but or although. The sentence following this qualifier is the other possibility of what might happen or might not have happened in the mind of the character. In Improvisation, when the rule is to add onto what is suggested, this kind of suggesting, then rejecting the suggestion, is the death knell of a good scene. In a novel, the result is a push-me pull-you narrative that never quite finds its forward drive.

After the uneventful train trip, Tyler takes us to the pivotal early snapshot of the family, the one time they went on holiday during the summer of 1959. The narrative is again casual and meandering, painting a picture of individuals who don’t quite connect with each other but are forced into proximity with the expectations of good family time together. Fun at the lake in the late fifties. Slow. A snapshot means its frozen in time. In this case, emotionally frozen.

Jump ahead to 1970, and Tyler paints another portrait of this family, on the day that Mercy and Robin drive their youngest son, David, to college. Here is a quintessential general paragraph, describing vague “things” with no real descriptive qualities: “For most of the drive home, they were quiet.” Occasionally they would say things like “Those walls could have used a coat of paint, in my opinion” (this from Robin), and “I wonder if David will remember a single word of my laundry instructions” (from Mercy). But generally, the scene drowns “in that sort of silence that radiates unspoken thoughts—complicated, conflicting thoughts cluttering the air inside the car.” Oh, if we could only have heard a specific thought, or even one, complicated, conflicting conundrum we might feel something for these characters.

Finally on page 73, Mercy, who is the mother of this family, packs a bag and effectively moves to a small room a few blocks away, pretending it is only her painting studio, but with the intention of separating from her husband, Robin. Every day she brings more of her things from home and spends more time at this apartment until finally everyone accepts that she lives there while Robin continues to live in the family home. With this distanced way of dealing with the breakup of her marriage, Mercy’s narrative stands out in the family, but the opportunity to delve deeper into this usually pivotal conflict is unspoken and unobserved—except from the unexplored afar.

At the end of the book, there is a sense of time, of decades, of generations having gone by— and this forgettable family simply shrinks back into their faded, predictable photos.