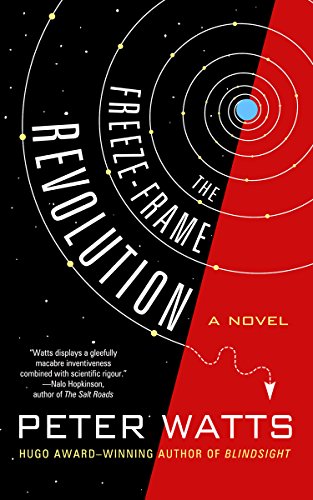 The Freeze-Frame Revolution is “hard” science fiction, a novel (or novella—the book is borderline in its length) devoted almost entirely to exploring a concept. How, Watts considers, might a group of people, each awake for only a few days each century, rarely overlapping with one another, stage a revolt against a constantly-conscious artificial intelligence?

The Eriophora (Latin name of the orb-weaver spider, in case you were wondering) sets out from Earth in the 22nd century to create a network of wormholes that will ultimately allow humans to experience faster-than-light travel. Because the Eriophora itself must travel at much slower speeds, though, centuries inevitably pass between wormhole creations.

The crew spends most of its time in hibernation. For each “build,” a handful of the 30,000 crew complement awaken, work, and return to sleep. Wormholes are built. The Chimp, the sub-human artificial intelligence managing the ship, keeps the mission on track. Sixty million years pass.

Protagonist Sunday Ahzmundin narrates the experience in stark, noir-esque language. Her transformation from diligent worker to rebel is a slow one, encompassing fully half the book. Watts uses that space to establish Sunday and Chimp’s intimate, even affectionate relationship. The friendship is almost unspoken. Sunday accounts for technology, spaces, actions, and little more; emotion lies buried somewhere deep in the asteroid-ship, trapped in the tangled gravity wells of the Eriophora’s miniature black hole engine. Anyone approaching the singularities of gravity or personal expression tears herself apart.

The concept is a delicious one. Watts’ approach creates deep tension in the story’s silences and its long, still periods of dreamless sleep. The result is page-turning and demanding. The story’s details demand sustained attention; they drive binge-reading. Pause, and the need to go back, reorient, re-ground asserts itself.

This is the book’s strength and its weakness. The urgency drives constant attention, and the book, at just over novella-length, lends itself to binge-reading. It’s a book to read in a single sitting or over a couple of intensely-driven nights. Beneath that urgency, though, there are only technical details. Watts renders the Eriophora in encyclopedic detail but presents only sketches of his characters. Sunday’s identity and deeper emotions never materialize. Named characters rapidly become interchangeable, reinforcing the idea of a crew complement of thousands but giving the reader few stable figures within the narrative.

The result is technically fascinating but psychologically shallow. Watts is upfront that his focus is on science. He offers thanks in his acknowledgements to novelist Caitlin Sweet, who, he asserts, knows “way more than I do about character development; her hooves are all over whatever parts of this story involve the torture of souls rather than technology.” The suggestions that he has only a passing interest in characterization and that he uses suffering as his primary mode therein may sound facetious, but both are essentially accurate.

There was the potential here for more. If Watts had developed The Freeze-Frame Revolution from novella to novel, if he gave as much energy to the characters as he did to the technical scenario, he could have produced genuinely insightful work. That more complex novel’s traces lurk in Eriophora’s dark halls. The crew’s status as “’Spores”—possibly clones, certainly beings of brief and accelerated childhoods—holds enormous potential. Queer and genderqueer characters interact with cishet characters unremarked. Each “tribe” of those awakened (cohorts overlapping in time) has its own social dynamics. What society sent these people forth? What are the dynamics of their waking lives? If these questions commanded Watts’ attention, a world might spiral forth from the wormhole network the Eriophora leaves in its wake.