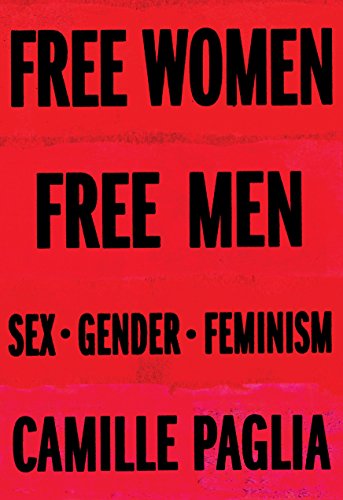 Camille Paglia’s relentlessly controversial public persona and pronouncements tend to overshadow her actual work. Anyone dipping into this book of essays and interviews must be prepared to take on a strong dose of personal propaganda and the litany of her likes and dislikes.

Paglia variously describes herself as a pro-sex feminist, a dissident feminist, an intellectual first and a feminist second, a transgender being, and a non-gendered entity—all the while complaining that in America men and women have become too similar to be attractive to each other.

She still stands by “every word of my date-rape manifesto.” Women infantilize themselves when they cede responsibility for sexual encounters to men or to after-the-fact-grievance committees, parental proxies unworthy of true feminists.”

Amongst her “likes” are Betty Friedan, Germaine Greer, Barbara Streisand, and Madonna. Amongst her targets for repeated vilification are Gloria Steinem “the czarina of US feminism,” and her “acolytes” Susan Faludi and Naomi Woolf.

Anyone coming new to Paglia’s thinking is recommended to read carefully the Introduction which catalogues her career evolution and publications, as well as her feisty encounters with a number of her fellow feminists where she managed to “avoid fisticuffs” or “left before the dessert;” and Chapter 29 which is an interview with Deborah Coughlin of the Feminist Times (Feminist Times UK July 14,2014) entitled “Cliquish, Tunnel-Vision Intolerance Afflicts Too Many Feminists.”

Inevitably many of these collected essays that rely so much on pronouncing on topical issues have a dated air now. Who remembers the case of Clarence Thomas and Anita Hill in any detail? Or Bill and Monica and “that dress”?

While always entertaining and provocative does Paglia bring anything new to what she still calls “the battle of the sexes,” though looking forward to “a wary alliance between strong men and strong women”? Here is a taster:

“The leading feminists have mostly come from the Anglo-American tradition. Even a Jewish thinker like Betty Friedan shares what I have called the word-fetishisms of Anglo-American culture, which confuses language with reality and leads to an inability to understand images, which are the pagan essence of Babylonian Hollywood. Both Madonna and I, as lapsed Catholics, have brought a Mediterranean point of view to late-twentieth-century feminism. We respect sensuality and the Dionysian, with its deep, dark earth rhythms as well as the more Apollonian phenomena of glamour, fashion, and the idolatry of stars, a taste we share with gay men.”