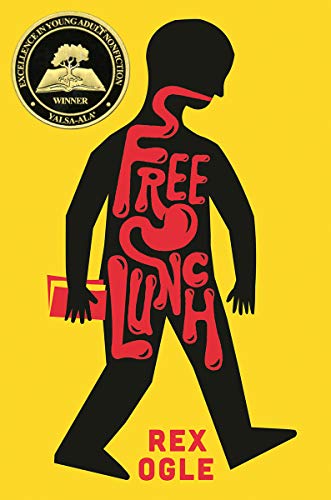 “Rex’s compeling account of growing up poor and hungry will resonate with many readers in similar circumstances, and hopefully, trigger empathy in those who live more fortunate lives.”

Rex lives in subsidized housing with his mother, stepdad, and little step brother. He is just starting sixth grade and his mother has signed him up for the free-lunch-program. Rex is mortified standing in line and having to announce every day that he receives free lunch. In order to not have to say the dreaded words, “I’m in the Free Lunch Program” he comes up with several plans to avoid the mortifying admission. One day he writes a note to the cashier and hands the paper to her. But she tells him she forgot her glasses and asks him to read the message out loud, causing him again to expose his humiliating situation.

In class he’s convinced that his teacher doesn’t like him, and then there is the pressure to find a group to belong to, to be either among the “band geeks. Theater students. Eighth-grade jocks. Seventh-grade jocks. Cheerleaders. Goth kids. Heavy-metal wannabees.”

At lunch he meets Ethan, who introduces him to X-Man. Ethan also also needs a friend. Rex wonders, “if he doesn’t have any friends ’cause he didn’t get on the football team either. Or maybe he’s just a total weirdo. Then again, who am I? I’m a total poor kid.”

Rex is not only hungry for food. He also gets little love from his mother who is unemployed and relies on food stamps and often unloads her frustration onto him. As a result, they argue, and Rex is left with anger against her that then turns into guilt. He makes poignant observations, “[Mom] definitely loves me more when she has money.”

The author pushes the boundaries of middle grade with this compelling memoir by including authentic depictions of the humiliation of poverty, the pain of hunger, and the physical abuse Rex suffers at home. Intense details make the book painful to read. Readers will feel as helpless, terrified, and angry as Rex when he is left alone at home for days with his little stepbrother.

In an endnote the author explains that he wanted to write this book because he remembered that as a child growing in this situation. “The worst part of living like this is thinking—as I did—that I was alone, that I was shameful, and that I had less worth because of the situation into which I was born.”

Too many children in our country live in what we euphemistically call “food insecurity.”

Rex’s compeling account of growing up poor and hungry will resonate with many readers in similar circumstances, and hopefully, trigger empathy in those who live more fortunate lives.